An insight from the racers following Kyogle's penultimate weekend.

Toby Price – 1-1 Outright (KTM Enduro Racing Team):
We got a couple of wins here, which is what we go there to do. We had a couple of little dramas with our front-end set up but we got on top of that a little bit and came away with it. The conditions up there were a little bit dry and dusty and the trails were laid out really good so it was a great event. The trails were well marked out and there was a variety of everything. We’ve extended the points lead with two rounds to go, but there’s still 50 points in it, so anything can still happen. If we can stay ahead of those guys at the next round we might be able to seal it up early, but if not, then we’ll keep the head down and keep doing what we do.

Peter Boyle – 8-9 Outright (KTM Enduro Racing Team):
It felt good to do well here with the four-day coming up, and it’s good to be closing in on McCormack – I’ve beaten him in a couple of rounds earlier on but these last two he was way ahead. It was an awesome place to ride there, with a bit of everything; hilly stuff, tight stuff and my bike just turns so well so it’s fun to ride in those conditions.

Daniel Milner – 3-3 Outright (CDR Yamaha):
I won the last round after coming off my ankle injury, but that weekend kept me from riding and training the following week which was a setback. I felt I lacked some fitness over the weekend and also I need to brush up on riding hard pack dirt as you need to be a little smoother on the brakes and throttle. With the A4DE, I6DE and the final rounds of the AORC approaching, I need to work hard on those two things so I’m 100 percent. 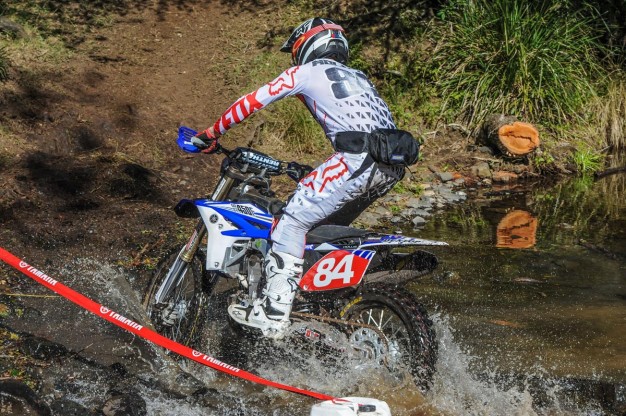 Chris Hollis – 2-2 Outright (CDR Yamaha):
The last couple of rounds have been a little sandy based and that’s not my best surface so I was really looking forward to the Kyogle weekend. I felt good right from the start and it was nice to post a good result on Saturday and I was much more relaxed heading into Sunday. The WR was great in these conditions and I was within 10 seconds of the lead on both days so it was pretty tight. It’s good to leave here with a good result and look forward to the coming events.

Josh Green – 5-5 Outright (Active8 Yamaha):
It wasn’t a bad weekend, it just wasn’t great. I didn’t feel I rode my best and with the level of competition the way it is this year, you need to be 100 percent nearly every weekend to win these races. In the championship, I’m third outright and with a good final weekend, I believe I can get to second and things are even closer in the E2 class. I have to make it happen in Victoria

Tom McCormack – 6-8 Outright (Active8 Yamaha):
The weekend went well and I was able to get the win on both days. The last couple of events I haven’t had the best of luck so it was nice get out there on the weekend and race with no problems. I have done some riding in the Kyogle area and I really like the conditions. It was important for me to get some good results here as it takes a bit of pressure off in the final round. But it’s not over yet and there are still 50 points up for grabs so I need to keep on working and see it through right to the finish.

Glenn Kearney – 4-6 Outright (Husqvarna Enduro Racing Team):
Had to buy the kid dinner tonight. That’s the deal if he beats me, and Lachy rode real well here. Especially today, I think two or three of those tests he was on the same second as the leaders.
For me the biggest positive was two wins in the class, but overall it was fairly disappointing. I struggled yesterday but managed to come away with fourth over Greeny. I thought we’d turn it around today but we were actually worse. It took me until this afternoon to figure out I wasn’t riding the 500 the way I should have been and two of the tests were killing me. Once I got more aggressive and got over the front of the bike it started working like it should. My own fault really, but second Outright is still a nice place to be. Lachlan Stanford – 17-4 Outright (Husqvarna Enduro Racing Team):
In the first test I overshot a turn and a stick went through my clutch line and I had to ride out of the section with no clutch. I lost a minute and a half there, so that was a bit of a pain. I made up for it today, did some really good test times and got fourth outright behind Pricey, Milner and Hollis, so I was happy with that. Some of my test times were really close to them, so it’s a good sign that I’m moving forward and that’s what I’m after this weekend. In fact to be in the ballpark with those guys is what I’ve been aiming at all year. I also beat Glenn for the first time today which is awesome!

Scott Keegan – 13-15 Outright (Husqvarna Enduro Racing Team):
It wasn’t too bad, but I must have been riding a bit too safe. I wasn’t making any mistakes but I wasn’t as fast as I would have liked either. Today I pushed a little bit more, but had a couple of crashes in a couple of tests, and I’d be lying if I said I wasn’t disappointed with third, because I was pretty good on the tight bush one and I like the enduro format.

Geoff Braico – 9-11 Outright (Husaberg Enduro Racing Team):
It was an alright weekend for me, I was pretty much in salvage mode after tearing the MCL last weekend – It wasn’t a bad tear but it’s hard to put that aside and ride 100 percent, so I’m just stoked to be in the top ten outright. I want to be there but I was surprised yesterday to get ninth and today to just miss out by a second or two. As far as the class goes all the boys are going super fast – that’s why it’s the premier class I guess, but it was a little bit of a flat weekend for me trying not to damage the knee any further. I rode the 450 here to test whether I wanted to ride it or the 350 in the four-day. I like how the 450 tracks, but I like how the 350 turns… I’d race the 350 over the 450 in cross country, but in the grass track stuff the 450 is the bike. That’s the beauty of riding the ‘bergs I guess, they’ve got two great bikes in E2. Thanks to Drew and all my sponsors for helping me out!

Jarrod Bewley – 12-13 Outright (Husaberg Enduro Racing Team):
I felt good on the Saturday, and felt like I was keeping the momentum up. I thought I was going alright until I saw the times, but the outright results just weren’t there for us this weekend. Probably I wasn’t being aggressive enough in the end. The other guys were going well though and it was pretty tight overall, from the top guys right back there wasn’t a great deal of time there. I’ll try riding try some motocross before the four-day to get the intensity up so I can be more aggressive in the sprint laps. We’re only talking about small fractions in the corners and straights, but that can make a big difference.