With just two rounds remaining of this year’s Yamaha Australian Off-Road Championship (AORC), KTM Enduro Racing Team’s series leader Toby Price is staring down the barrel of the wrapping up his fourth Outright championship in six years. MotoOnline.com.au cornered Toby after his round nine and 10 wins to get his view on the weekend that was. Toby, this weekend another two round wins brings you level on par with Daniel Milner, who also has five round wins this season, but most importantly you now carry a 28-point lead over Glenn Kearney Outright and a 19-point lead over Chris Hollis and Josh Green in E2. It’s pretty fair you to say have had a good weekend; how was it from your point view?

Yeah, it all went fairly good today. I had an off in the first test early in morning, but we managed to get through the rest of the day fairly good. I can’t complain I guess, I just cruised along and kept the KTM 450 EXC on two wheels and we are just happy we got through to the end of the day. We’ve extended the points lead, which is a good thing, but the main thing is I’m all fit and healthy. Now I’m looking forward to the Tri-Series next weekend at Doorawarrah in WA, after that the A4DE, then the last two rounds of the AORC in Victoria.

Looking toward the A4DE at Dungog, what have you learnt from this round in regards to bike set-up that you can apply considering the conditions are almost similar?

Look, we’re always learning, we’re always trying to get the bike set up right. We had a little bit of drama on the Saturday with the front-end in the morning, which we got sorted. The bike didn’t feel too bad today, but I think we can work on a few more things and make it a bit better and we will just go from there. But we’re feeling good, if we can just get through to the end of the year with no more injuries and just keep fairly fit and healthy that will be the main thing. Hopefully we can add a few more Australian championships to the cabinet. It’s bloody hard work, let me tell you that! At the moment the boys are on fire and that is showing that in the test times as the times are all close. It makes it good. It makes it very interesting for the day and good racing and good for the spectators and the sport. 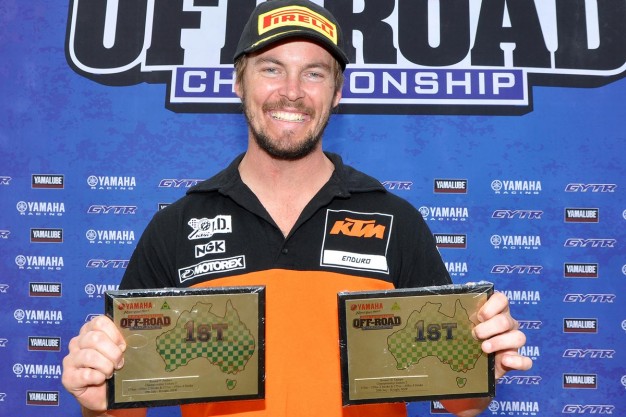 With Glenn finishing outside the top three in the Outright position, your championship is looking very healthy. The championship still can be lost, but are you pretty confident now that you have got one hand on the title?

Nah, you can never be too confident! Just as long as I’m confident riding the bike is the main thing. As I have said, anything can still happen and you can’t start thinking about all that stuff until the time comes and you get that trophy in your hands. It will definitely be nice to wrap up the championship if I can, but we still have another two rounds to go and there is still another 50 points up for grabs, so anything can happen. We will just try our best, that’s all we can do. We’ll head to the next round and have some fun, get through the weekend and make sure we’re there and hopefully we can walk away with the number one plate.

In regards to bike settings, you touched on the subject that you had a few front-end issues. What sort of things will you actually make adjustments to?

I say we will just go and paly with a bit of valving and maybe some spring rates and stuff like that. We will also try a couple of different compounds of tyres. The bike was good, but if you made a little mistake it did cost me a fair bit. So I just made sure I hit my lines right. The bike was definitely rideable, but I could still feel I wasn’t hitting things the way I wanted to. But it was good enough to get through the day and cross that finish line in P1. We’ll just go and try a few different things and see how we go.

Well, I’m sure you have a lot of fans out there that are right behind you hoping you do get the job done. Good luck next weekend in WA and at the A4DE.

Thanks heaps, looking forward to it!