South Australian native Kirk Gibbs has continued his impressive run of form in 2014 with another MX1 round win of the 2014 Monster Energy MX Nationals at Conondale on the weekend. In dry, dusty conditions the 25-year-old KTM racer stormed to 2-2-1 results to claw back one championship point from series front-runner and defending champ Matt Moss. MotoOnline.com.au spoke with Gibbsy to get his thoughts on the day’s racing and what it’s going to take to overtake his rival for the championship lead. 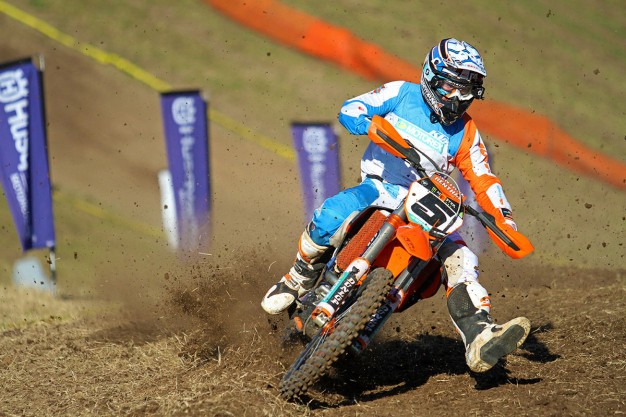 Gibbsy, great win on what turned out to a tough track. Again, your consistency this year has paid off.

Yeah, that’s the main thing I wanted to work on this year, to be consistent. In my MX2 days I put myself into title contention, but inconsistent results let me down. If I’d be more consistent I would’ve already had a senior national title, I think. It’s something I worked on last year, and even though I did get on the box and felt good, I still had up and down results. This year I wanted to be inside the top five in every race, and I’ve done that so far, bar one. I’m really happy with that and I want to keep that going for the rest of the championship.

Take us through your day. How did it all pan out for you?

It started awesome and I put in the fastest time in qualifying, but during the Super Pole lap I made a couple of mistakes and that cost me the top spot and those five points. Second was still pretty good though, especially as I didn’t make Super Pole at Swan Hill. Going into the first race, I felt confident, but I got jammed in the first right-hander at the top of the hill and that put me back to 10th or something. I plugged away and picked a few people off and ended up second. I was happy with that, especially as the track was quite hard to pass on. In the second race I got a better start and I kept the pressure on. I got past Matt and got within 0.1 seconds of Billy as we crossed the finish line, so I got real close to winning that one. Going into the last moto I knew it was tight between all of us and I thought if I could get some clean air I’d be able to break away. I got behind Mossy and found a few better lines than he was hitting. I was able to make the pass happen and then focused on riding smooth to the end.

You’re starting to put your hand up as one of the biggest threats to Mossy’s campaign. Was it part of the plan this year to start solidly, then start to ramp things up as the season progressed?

Back in the NZ nationals I didn’t know where I stood and I didn’t do so great racing there, but I had a good race at the final in Taupo and that gave me some confidence coming into the MX Nationals. But then I damaged my hand coming into the first round, so I was nervous with that and chose to play it smart. From there, my hand has healed now, so I can push as hard as I can. At the same time Mossy got the scores on the board early and now I’m playing catch-up. So yeah, it wasn’t really the game plan. I would’ve preferred to be in Matt’s position, but I’m focusing on myself and I’m not worried about anyone else or what they do. The Conondale track was weird and didn’t develop any ruts at all on Sunday. Did the conditions surprise you?

Yeah, it did. During our track-walk on Saturday I thought it’d form some good ruts as the club had ripped the track a bit. The new tight back section was weird and one-lined, which was a bit disappointing – I liked the old track that had more flow out the back. But overall, I think the conditions played into my hands. I tend to ride well when there’s no ruts and nothing to turn off. It got really dusty in the final moto though, and you couldn’t see hardly anything going past the mechanic’s area. I was up front most of the day too, so to have been back in the pack would’ve been crazy-dusty.

The club made the big Dunk’s Hill jump a real standout feature on the track this year. Could you hear the crowd when you hit it?

Oh definitely. I think Australian motocross tracks are missing that X factor that attracts the crowds. A lot of people were there enjoying it and there were a few guys styling it up. I don’t have much style when it comes to racing; I’m just focusing on winning. Still, it was a cool feeling to hit that jump every lap and get some mad hang-time. Australian motocross misses that sort of thing.

Legend, thanks heaps mate. See you at Raymond Terrace.

No worries. See you there.