Refinement is the key word when talking about the changes Kawasaki made to the 2015 KX250F. I don’t mean just bold new graphics and a different seat color and ship them out of Japan. No, this bike was scrutinised by Kawasaki engineers much more than that.

Despite being one of the best all-around packages in the 250 division, Kawasaki went to work trying to make a great bike even better. They started by changing to a bridged box piston, increasing compression and performance. They changed the magneto rotor and offer several optional weight to suit your preference.

The 2015 KX250F has an all new downstream fuel injector that delivers fuel in a more refined spray for increased performance. The changes to the injector, ECU and magneto all work together to deliver more horsepower than ever before. 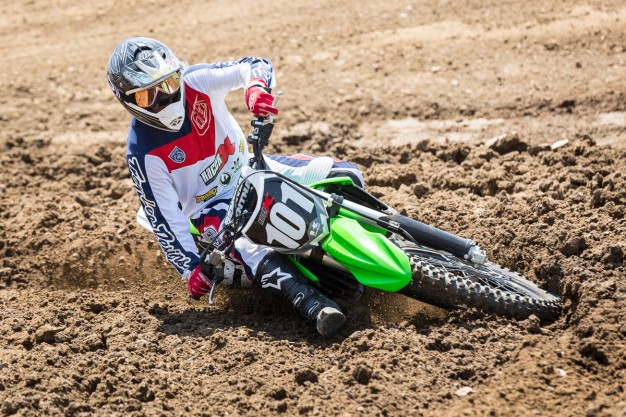 The chassis also got some tweaks this year. The Showa SFF (Separate Function Forks) receives a revised setting, as does the rear shock. The footpegs have two positions, high and low (5mm difference), which are fantastic for fitting the bike to taller and shorter riders. The handlebars are also adjustable and have four positions to fit any rider.

The sub-frame has been lightened and the rotors have been changed to a Braking model. The front rotor size has increased to 270mm for increased stopping power. On top of all that the forks have a cool, machined silver finish that looks just like the works Showa forks and the engine plugs and finishing pieces on the bike are green this year.

The refinements are significant and the new bike looks amazing sitting on the stand. How does it work?

After a quick sag check to get me to 103mm I was off and running. Or, riding, as it were. I’m always impressed by the Kawasaki engine. In the past I wasn’t sure if it was really fast or if it only sounded fast because the stock muffler was so loud. But there is no denying that this bike hauls ass. The power picks up quickly, runs through the RPM without falling off and finishes strong as it bumps into the limiter. There was a triple out of a turn that I wasn’t sure if I could get over on a 250. After a few runs at it to size it up and figure out which gear I needed to be in I left it in second gear and twisted the throttle… No problem getting over it.

Once I was more comfortable I also tried shifting to third right before the face of the jump and it picked that up without issue as well. I really can’t find any fault in this motor. It pulls strong in second in any tight turn or slow section and it revs way out if need to just leave it in a gear a little longer.

The stock setting for the ‘pegs and the ‘bars was ideal for me, but I’m a shorter guy and I don’t need the extra 5mm under my feet or the extension from the ‘bars. A taller rider would absolutely love this feature and make him comfortable where he would otherwise feel cramped. The suspension worked excellent after a quick adjustment to the pre-load. I went in two clicks on the pre-load to get the fork to ride a little higher in the stroke. The action was fine I just wanted it to sit a little higher to balance out the chassis.

If you haven’t played with that adjustment to balance the bike out you have to do it. This is one of the most important changes you can make when setting up your bike. After that the suspension was perfect. The track didn’t get brutally rough but I felt like I could sign up and race the bike that way and not have any major issues.

I noticed the increased front brake rotor size immediately. Any intermediate or expert level rider will typically want to do something to the front brake to increase power; going to a steel braided brake line or a larger diameter rotor, or both, are typically the answer. The power of the Kawasaki KX250F front brake seemed like it was sufficient for any rider.

I was very impressed with how this bike worked. It is quick, well-handling an nimble; all characteristics you look for in a 250 motocross bike. It is also very polished with the finer details making for a great overall package. 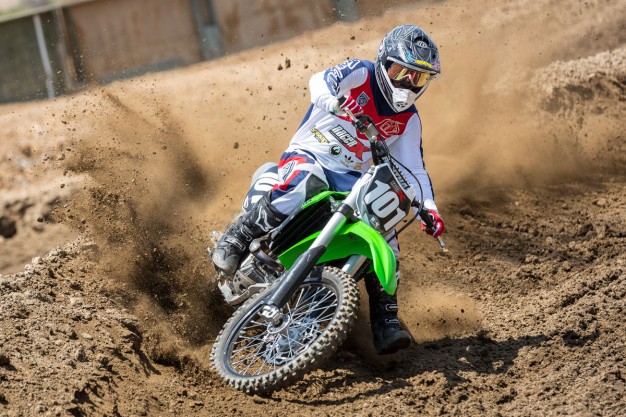 There are different plug-in couplers you can use for different map settings, mud guards on the footpads, a baffle in the expansion chamber (much like an aftermarket unit), black anodised triple clamps with adjustable ‘bar mounts, black titanium coated fork sliders, black anodised shock and trick green anodized engine plugs and caps.

The designers also did a great job of making this bike look great once they were finished making it work great. The new Kawasaki is a potent race machine that has been proven with race wins and championships – I don’t think those wins are going to stop this year either.

The updated KX250F’s RRP is now reduced to $9999, available in Australian dealerships.