With four rounds left of the 2014 Monster Energy MX Nationals, less than 20 points separates the red plate holders from second in MX1, MX2, and MXD seeing the 2014 championships coming down to the wire.

In many years, spectators have seen championships wrapped up well before the end of the series. Take Luke Styke for example. In 2013, the Serco Yamaha rider managed to lock down the MX2 championship at Toowoomba, meaning that the following rounds were a mere bit of fun for champ.

This year though, it seems that the dominance we saw from many top riders earlier in the year has slowly dropped off, and middle pack racers have found some momentum, and are putting championships under some serious pressure.

This year the MXD class has been nothing short of thrilling. Packed gates, and young guns with some serious talent under their belts. A single point separates red plate holder Egan Mastin from Jack Simpson – and only seven points lay between second to fourth.

With the MXD class having been absent from Swan Hill, round seven of the MX Nationals at Conondale this weekend is certain to deliver some seriously close racing. One mistake at this stage could throw the whole MXD championship in another direction.

In MX2 this year, most would agree that Serco Yamaha’s Luke Clout has been a force to be reckoned with. However the two stroke, four stroke debate has again reared its head, with seven of the top ten in the MX2 class racing two strokes, Clout is feeling the pressure.

Although Clout retains the championship lead heading into this weekend, questions have been raised on whether it is just a matter of time before the red plate is handed over to someone else.

Teen star Nathan Crawford having snatched the overall at Swan Hill, and KTM’s Hamish Harwood only trailing Serco Yamaha’s Clout by a tiny 12 points, less than one moto determines the 2014 MX2 Championship and at this stage it’s Clouts to lose.

Motul Pirelli Suzuki’s Matt Moss. Had you been asked to bet money on who would take out the MX1 championship at the beginning of the year, most would have bet their life savings on this guy.

Having dominated the first half of the season comfortably, Moss has since come under pressure from his brother, NPS Monster Energy Kawasaki’s Jake Moss, and of course KTM Racing’s Kirk Gibbs.

Having been criticized during the break for losing his ‘mojo’, Moss came out firing at Swan Hill with a point to prove, however his form again supported the rumors, taking third place on the podium at the conclusion of round six, and dropping his championship lead to only 19 points.

Whether it’s snatching championship points in Super Pole, or finishing number one in every race, there is no doubt that the 2014 Motocross championships are coming down to the wire.

With round seven of the MX Nationals at Conondale just around the corner, and less than 20 championship points determining each class, every moto this weekend is going to count. 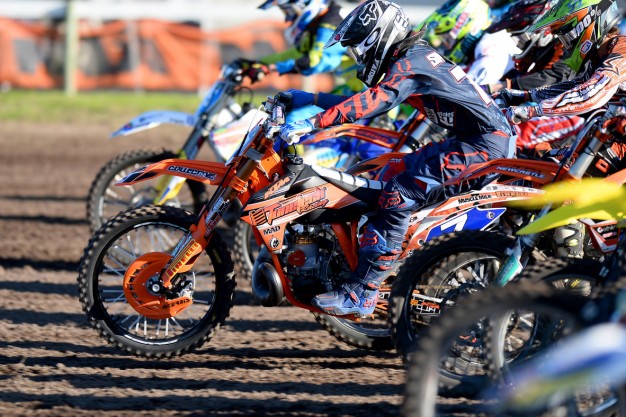