Teenage Husqvarna Australia racer Nathan Crawford sent the MX2 class into a spin at the Swan Hill round of the Monster Energy MX Nationals when the MXD contender claimed his first senior overall round win. MotoOnline.com.au caught up with Nato to find out how he did it and gauge his expectations are for the remainder of the MXD championship. 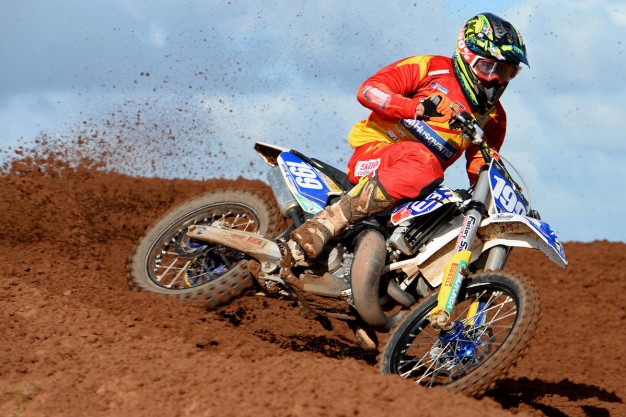 Nathan, that was an awesome win you grabbed on Sunday. Did you exceed your expectations in what was only your second-ever MX2 outing?

I guess so. I qualified in fourth place, but I was happy with the fact we were all within a second of each other and I wasn’t competitive with the top guys. In the first moto I got a decent start and battled my way through the pack to second place and was closing in on Luke Arbon by the end of the race. I didn’t expect that, but it gave me a good idea of how I stacked up to everyone else and I knew that if I got a decent start I’d be able to do something with it. It all worked out too – I got the holeshot in the second race and led for the full 30 minutes to take the moto win and the overall on the day.

What happened at the start of the first MX2 race? There are photos circulating of a tonne of riders looking like they cut the track going into the first turn.

I don’t really know what started it. We all went into that slight left-hander and Luke [Arbon] got pushed into Egan [Masten], who then pushed me off the track. I don’t know how the riders behind us got pushed off though. In the inside of the next right-hander there was a tyre wall and I managed to get back on the track before it and go around the outside of the tyres, probably in about 10th place. I saw a small gap in the traffic and rode straight onto it. After that corner there’s a double and there were riders pulling back on there who fully missed that right-hand sweeper altogether. I almost got cleaned out by people pulling onto the track in front of me. It was surprising no-one got penalised over it, really.

Word is you were tossing up whether you were even going to go down and ride Swan Hill, or stay up in Queensland and train for the MXD title fight next weekend. What made you decide to take the plunge?

Yeah we were undecided about going down, but I was talking to Jason Daniel from LKI and he pretty much put the hard word on me to make the effort, as it was worth getting my name out there in the Lites class. Me and dad entered and drove down at the last minute and I’m definitely glad we did now! You’ve taken a lot of people by surprise with your last two MX2 performances at Wanneroo and Swan Hill. How do you think this little stint in MX2 has benefited you?

It’s definitely helped me confidence-wise and I’ve learnt a lot about bringing more intensity to the track, especially in the first half of the race. I think the MX2 riders are a lot smarter and mature in their riding too. In the MXD class we tend to go flat-out, but that can also have consequences. The MX2 racers have learnt where they can and can’t push themselves on the track and that means they make less mistakes and are a lot quicker in the long-run.

You’re back to business in the MXD class for the rest of 2014. With three of the last four rounds in Queensland, you must like your chances of tracking down Jed Beaton for the title.

Yeah Jed’s only eight points ahead of me, so there’s not much in it at all, but any of the top four guys can win at any time, so consistency is going to be key. I want to be consistent and gain points every race. Conondale and Coolum are two of my favourite tracks and I think them being local rounds for me will be an advantage. I haven’t ridden Gladstone in a long time and Raymond Terrace is going to be a neutral ground, so it’s all about being up near the front for every race from here on out.

Thanks for that, buddy. Catch you next weekend.