After some horrible luck over the last couple of years, Victorian DPH Motorsport Yamaha racer Kade Mosig broke through for his maiden MX1 round victory at an icy Swan Hill round of the 2014 MX Nationals on Sunday. MotoOnline.com.au caught up with the likeable 24-year-old to find out if the smile had left his face yet. 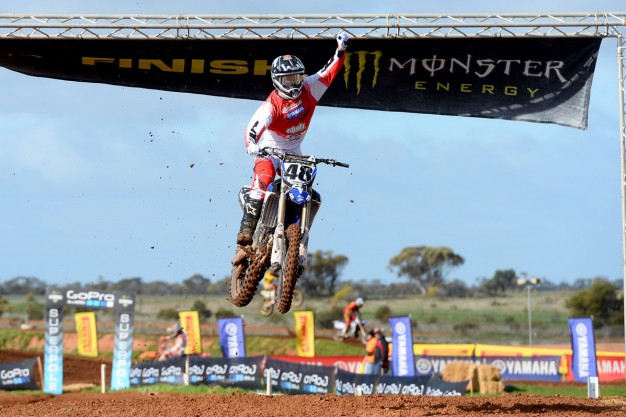 Mozzi, congrats on an awesome win at Swan Hill, man. How are you feeling?

I’m a little bit sore and tender, but nothing more than usual. On race day I always go all-out and don’t leave anything in the tank, so I always pull up a bit sore the next few days. I’m really pumped on the weekend and it was good to get that winning feeling again. It makes you want to get more, so I’m going to put in some hard work between now and Conondale to see if I can do it again.

Take us through your race day. Right from the get-go you looked on-point and you were unlucky to not make Super Pole.

Yeah it was a pretty solid start with a sixth place in qualifying. Although I didn’t make Super Pole it was my best qualifying result this year and it meant I could pick a good gate. My starts this year have been lacking so I worked hard on them over the break. In the first moto I pulled the holey and thought ‘we’re on now. I can’t back down from here.’ I pulled a comfortable seven-second gap on Billy Mackenzie and Matt Moss, but they I thought ‘shit I’m actually leading’ and pumped up a bit and made a couple of small mistakes that allowed Billy to get onto the back of me agai. I know how aggressive he is, so I knuckled down and by 25 minutes I’d established a good gap again and I rode the race out and claimed it. That feeling, mate, it’s been a long time – since 2011 actually – that I’ve felt it, so to get one back was unreal. It’s been a long road.

In the second moto you got another good start and managed to pass Mossy for third and take the overall from Kirk Gibbs by one point. At what stage did you realise you had the round win sewn up?

Not until I was back in the pits, actually! I ran fifth for the first 10 minutes then got into fourth over Billy. I saw Mossy ahead and he made a mistake that allowed me to get passed. I thought then that I’d be pumped for the first podium for the year. I crossed the line in third, with Gibbsy not far ahead, but I didn’t understand the points or do the maths on it all. Then Dale [Hocking, DPH owner] came up to me and said ‘mate, you won the overall’! There’s a photo going around of me looking pumped and it was taken at the moment I was told that I’d won. I was excited and emotional at the same time.

The past couple of years you’ve battled through some tough times with injuries, teams folding and the like. This must make all those tough times worth it.

That’s it. I think when you look back at the rough patch you go through – and everyone has them at some point – they only make you stronger to get to this point. Getting my first MX1 win makes you forget about the bad times and makes everything well and truly worth it… ohhhhh no.

My dog’s just chewed all my surfboard wax. Damn. 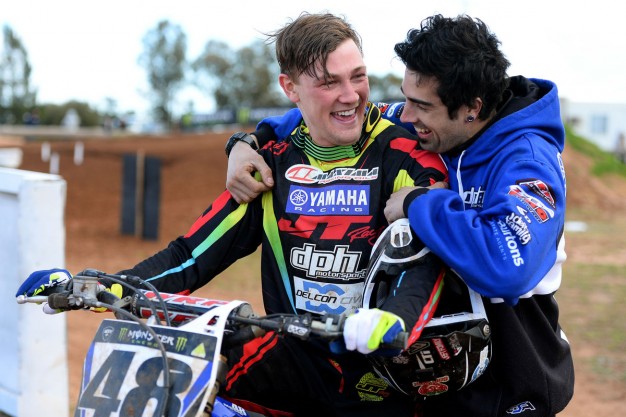 Lucky it was just the block of wax and not your board.

Oh, he chewed up a $400 pair of cycling shoes a while back, the little bugger. I wasn’t impressed with that.

Unlucky [laughs]! So how does your weekend win affect our race plans for the remainder of the series, and how are you going to approach Conondale?

I had a personal goal that by the mid-part of the series I want to start posting some decent results and pictured myself up there. I’ve been racing these guys for a few years and I grew up racing Gibbsy and the Moss twins, and I believe I should be up there with them. I look around at them and know I can do it and I want to get the gall rolling now. The bike and team set-up is awesome and we’re pumped on the progress we’ve made from the start of the season. I’m excited for the next few rounds. I’ve got a number three plate in my room from when I finished on the podium there in 2008, and I like Gladstone and Coolum. I’ve done well at Raymond Terrace in the past, so I’m really looking forward to the second half of the season.

As am I, mate! Thanks for the chat and I’ll catch up with you at Conondale.

Sounds good. See you there.