Five weeks has passed since we last saw the Monster Energy MX Nationals gates drop at Wanneroo. So where has everyone been? And what can we expect when round six of the championship kicks off again this weekend in Swan Hill? We took a quick look at a handful of riders from both the MX1 and MX2 classes, to see how they spent their mid-season break. Ford Dale
Seems like this guy just can’t catch a break, spending more time injured than racing over the last couple of years. Swan Hill will mark the return of Ford Dale to the MX Nationals, and we’re tipping he’s going to be one to watch. Dale, who has been back on the bike for around a month, was booked in to race Manjimup in WA over the break, however the team and rider decided against racing, wanting to save his return for round six of the MX Nationals. However Dale has been busy on and off the bike. The new dad is also the joint founder of Racing 4 Disabled, alongside good friend Harley Quinlan. The foundation aimed at assisting fallen riders who suffer spinal injuries launched their new website and held their first fundraiser in the break. Ford has been a busy boy!

Kirk Gibbs
Currently sitting only 22 points behind series leader Matt Moss, the KTM 450 rider will be looking to make a late charge on Moss over the next five rounds if he wants to take this championship. Gibbs was lucky enough to take the win at the Manjimup 15,000 during the five-week break and will be coming into the second half of the MX season carrying some serious momentum from that win. It will also be encouraging having the Motorex KTM Factory Team back to full form with the return of teammate Ford Dale this weekend.

Matt Moss
The current series leader. This time last year Moss managed to take championship away from Todd Waters and the second half of the year was where we really saw Matt Moss shine. During the break, Moss doesn’t look to have changed up his routine too much at all, which could definitely work in his favor (find what works and stick with it). We do know however that this kid thrives on pressure, so it will be interesting to see how close he lets Gibbsy get to him in this second half of the season, before putting his foot on the accelerator and trying to lock down the 2014 MX1 Championship.

Luke Clout
It was well known that Luke Clout had planned to use the mid-season break to head over to the US and try to secure a deal for 2015. After leaving the country pretty much straight after round five at Wanneroo, Clout spent a few weeks in the US (word is not riding) and has since been back on the bike in NSW preparing for round six. No word on whether he secured a ride in America for 2015, but watch this space.

Kale Makeham
Being the local talent at the Swan Hill round, Makeham has rode the track several times, and also did some laps for a media day with the local newspaper a week ago. Makeham is yet to peak in the 2014 MX season, however from all accounts the second half of the season should be good to him, with tracks that he is both familiar with and has had success on in the past. Eye’s will be on him this weekend at his home track.

Kayne Lamont
Lamont put a fair amount of pressure on series leader Clout prior to the five-week break, however a freak injury while in bed stopped him in his tracks. Lamont suffered an injury to his peck/shoulder, and tore some tendons and ligaments off his collarbone, so headed back to his home in New Zealand to heal up before round six. The young two-stroke pilot has had intense physio treatment to assist with his injury and we’re hoping to see him fit and healthy this weekend after some time off the bike.

Brenden Harrison
Currently sitting in third position in the MX2 championship. This guy has been plugging away, and has flown under the radar a little so far this year. During the mid season break, Harrison too headed over to America, however it was to spend time with long time girlfriend, rather than secure deals like opposition Luke Clout. Now back in Aus, and only 30 points behind series leader, could we see Harrison take top spot in the second half of the year after some time to refresh and refocus?

Daniel McCoy
Many would have noted his switch to Berry Sweet Husqvarna earlier this week after his short time with TM. McCoy, who is notorious for jumping ship, injured his back pretty badly at the start of the year, so round six at Swan Hill will mark his return to racing with his new team behind him. Having only tested the bike this week for the first time, it will be interesting to see where McCoy finishes on Sunday, and if his switch to Husqvarna sticks. 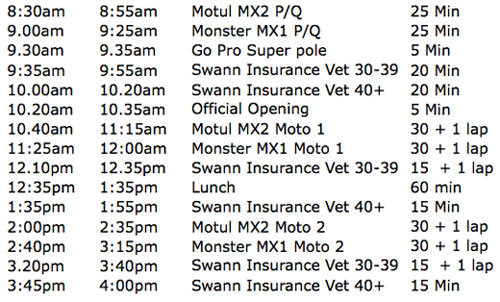