Caleb Ward shocked everyone at the Wanneroo round of the Monster Energy MX Nationals by essentially dominating the MX2 ranks, winning the first two motos before cruising to third in moto three and clinching the round. At 17, the KTM privateer could be battling amongst the MXD racers, but instead he’s stepped up early to take on the best 250 class contenders in the land. MotoOnline.com.au spoke to Ward to get his take on winning in the West. 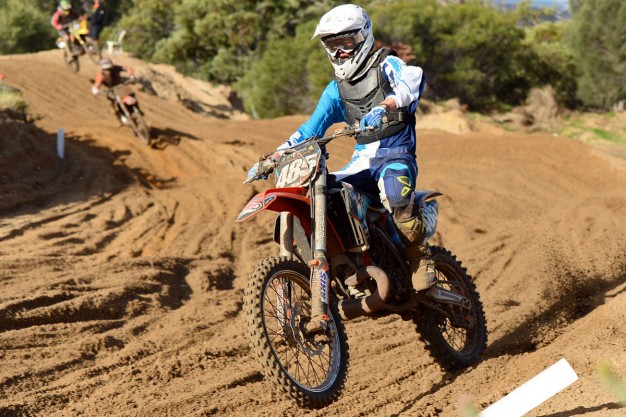 Congratulations on the result. It was a bit of a surprising result, but did it surprise you to come out and get that first win so soon?

I was a little bit surprised that I won both motos, but I’m pretty good in the sand because I do a fair bit of training in sand. I didn’t expect it so much being two moto wins, so I was pretty happy with it.

I’ve noticed you in different rounds here and there, but you really caught my attention at Murry Bridge. That was a good platform to boost you into Wanneroo wasn’t it?

Yeah, I set myself up pretty well there. I learnt a lot at Murry Bridge by getting that second place in the second moto. I figured out how to put it all together a lot more, ran with the front guys and after that I sort of knew I had the speed, so I just had to get a good start then I knew I should be able to hold it.

Have you ridden much at Wanneroo before?

Nah, this was my first time in WA. It was pretty deep and quite a bit different to other sand I have ridden back towards home, but still similar sort of thing, just a bit softer.

What were you thinking while you were out in front controlling the races? You looked pretty comfortable a week earlier in South Australia when you were running up the front, but what was it like actually leading the way in WA?

I was thinking about it quite a bit while I was out on the track. In the first race I had Clouty behind me and he was putting the pressure on me a fair bit, I think towards the middle of the race. I wasn’t really too nervous, I was just focusing on my own thing and riding my own race and just riding as smooth as I could and I figured if he passed me and he was faster, well I would just take it. I just stayed just riding my own pace, not pushing too much, and I wanted to stay on two wheels. I just basically focused on myself while I was out there.

You went 1-1 in the first two motos, then clinched the overall with a third in moto three. Was that the plan to try and seal the deal in that third moto? There must have been some pressure at that point.

Yeah, for sure. I could have gone quite a bit faster I think, but I was pretty nervous and just tried to focus doing my own thing and just finish off with another good result for the day and try and get the overall. That was my focus. I guess one thing a lot of people say is getting that first win is difficult, but then once you get that first one you’re sort of expected to be able to do it some more and carry that form on. So is that something your confident in; that you can win on tracks other than sand?

I think so. I think I’ll just head back home and do some more hard pack riding and that kind of thing – I think I can run the pace now. I think the main thing you need in the class is good starts and just try and ride smooth and consistent, that is the main thing you have to focus on. There are a lot of guys who get a good start in one moto and run up the front, then in the next moto if you start back in about 15th or something it’s so hard to work back through the field. You need consistently-good starts. I got three great starts in Wanneroo, so that was amazing and the two-stroke helps a lot as a privateer in that situation. If I had been on a four-stroke… yeah. It would be really expensive to run with the guys on teams.

So, yeah, you’re a full on privateer going up against the factories. Who’s behind you?

Axis Motorsports have helped me out majorly this year. They have been one of my main sponsors and they have stuck behind me for a few years. They are helping me out with my suspension and engine, plus KTM obviously have stepped it up quite a bit now. I have also got Spent Clothing helping me out with all my casual wear, Fly, M2R, Kidner Contracting, Fly underwear, Replay XD and Wayne Leonard Motorcycles. But most of all my family, they go around with me everywhere, driving me to all the races and making a lot of sacrifices for me. I really appreciate everyone who helps out.

Well congratulations again, great result. I’m sure you have put yourself on the radar, not only for the rest of this year, but next year as well.

Yep, no worries. Thanks heaps for that!