South Australian reflects on his success at Murray Bridge.

KTM Motocross Racing Team pilot Kirk Gibbs broke through for a pivotal maiden win in the MX1 class at Murray Bridge, SA, on Sunday. On a day that saw all sorts of action, the 25-year-old maintained his string of incredibly consistent results and made up some crucial ground on series front-runner Matt Moss. MotoOnline.com.au caught up with the man of the moment to find out what went down at Gibbsy’s home round. It feels really good. Getting wins this year was one of my goals; last year I sorta came good towards the end of the season, but struggled to be consistent, so for 2014 I put a big focus on being consistent and pushing for podiums. I came pretty close to winning at the last round at Wonthaggi (all three podium placers there tied on 60 points), so it was good to get that first win.

What happened in moto one? Reports say you took a rock to the eye.

Yeah I was a bit disappointed after the first race. I got a bad start and I didn’t have enough tear-offs, so after 10 minutes I’d used them all up and had to get rid of my goggles. I was behind Billy Mackenzie and got a little too close and a small rock flung up and hit me in the eye. I could barely see out of it, but I kept plugging away and still managed to pass Mossy on the last lap for fourth. I had a bit of a shiner after the race, though.

Did you ice it up or anything before the second moto?

Yeah straight afterwards I went to the Suzuki RACESAFE truck and they washed out the sand, then I pretty much had an icepack on it right up until the start of the second moto. That definitely helped keep the swelling down. Surprisingly my eye wasn’t too bad going into the second race, so I concentrated on getting a better start, made some early passes and rode my own race. Once I was out there I didn’t feel the eye too much. I just got on with the job and managed to build a gap, then relaxed a bit and rode smart for the last couple of laps to take it home. I didn’t even know I’d won the overall until I pulled up and Rob T told me. I was stoked.

You’ve closed the gap down on Matt Moss to 13 points. Have you found his weak spot or did Matt just have a bad round?

I don’t really know what went on with him, but he didn’t have the best round. He’s a fierce competitor and I know he’s going to bounce back. He’s not going to roll over easily, but at the same time everyone is riding really well at the moment. It’s not going to get any easier from here on, so I’ve got to keep doing what I do and keep trying to get on the box every weekend. I think I’m the only guy who’s been on the podium at every round so far, so I’m happy with that. 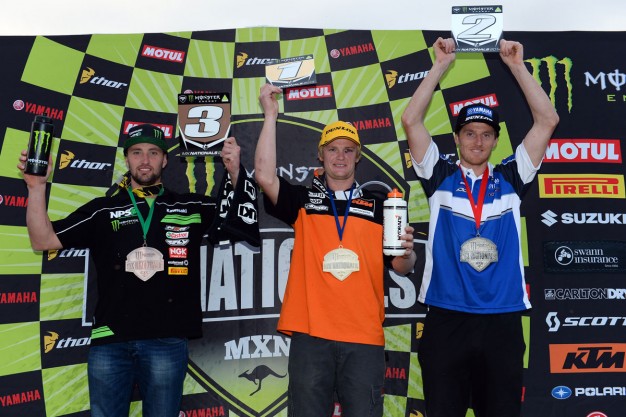 South Australian riders killed it on the weekend, with your good mate Luke Arbon taking his first MX2 overall. You must be pretty pumped on that.

I’m so stoked for him. Luke’s struggled for the past couple of years. He went through a bad patch and it’s hard to find backers and people to support you in those times, but it’s awesome to see him turn it around. He’s in a great frame of mind at the moment. He only got his bike two days before the first round and has really stepped it up this year. I’m really impressed with him and I hope he can continue chalking up wins now that he’s got a taste for it.

You’ve got a short turnaround before this weekend’s race at Wanneroo. Are you training at all this week, or will you take it easy?

Off-bike training, there won’t be much. I head to Perth tomorrow morning and will ride there tomorrow and Thursday and get used to the Perth sand. I’ll ride a practice track or two, and because KTM is based over there, they’ll have the know-how to get everything dialed in. Afterwards I’ll stay over there for an extra week and do the Manjimup 15,000. We did the race last year and it was awesome, so I’m really looking forward to getting back there.

How did you fare the last time the MX Nationals visited Wanneroo in 2012?

Not so good, actually. I was riding for Serco Yamaha and was coming back from a broken scaphoid. I hadn’t had enough bike-time and was under prepared, so my results weren’t great. But I grew up riding in deep sand here in Mount Gambier, riding all the beaches and tracks around where Josh Cachia lives, so I’ve got a bit of experience. Sunday’s racing is going to be tight and I’m not going in thinking it’ll be easy, but I’m hoping my deep sand-riding experience will pay off.

We’ll find out soon enough, I guess! Thanks for the chat, buddy, and good luck this weekend.