The contenders speak at the halfway point of the off-road season.

The Corner Inlet rounds of the 2014 Yamaha Australian Off-Road Championship (AORC) marked the halfway point of the 12-round season, featuring a Cross Country event on Saturday and a Sprint event on Sunday. Here are insights from the leading contenders. 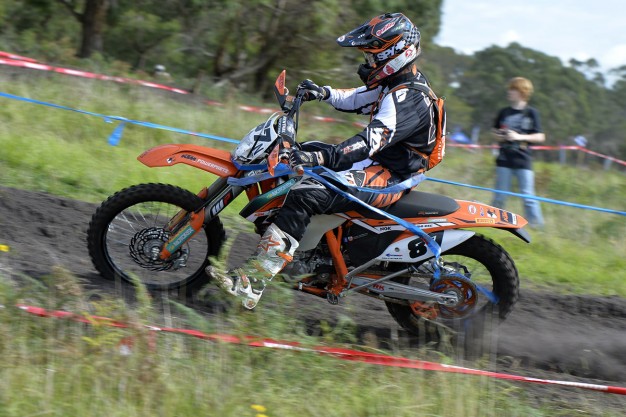 Toby Price – 1-1 Outright; 1-1 E2 (KTM Enduro Racing Team):
It all went really well for us this weekend with two wins that have got us into the lead in the championship, so now we’ll just try to stay smooth and consistent and we’ll be good to go. The racetrack yesterday and today was gnarly and it didn’t form up the way we thought it would. It was just soft, powdery, sand that actually felt like aquaplaning on water half the time! Plus there were hidden tree roots to deal with so there were a few unexpected split decisions to try to keep the bike on the ground. I’m pretty stoked to get this double.

Peter Boyle – DNF-9 Outright; DNF-1 E1 (KTM Enduro Racing Team):
We had a DNF yesterday when we were going really well and challenging for a second outright, but the 250s got left behind a little bit today. Class-wise though, I was in front the whole day just trying to keep it upright and it worked. I’m just feeling a bit more comfortable on the bike and feel like it’s really sorted for me. I’ve got a bit more work to do to really go after that class win, but we’re only halfway through so there’s plenty of time to catch up now that I’ve got the bike sorted and I’m really looking forward to that second half.

Glenn Kearney – 3-3 Outright; 1-1 E3 (Husqvarna Enduro Racing Team):
Well I said this one was going to be hard, and it was worse than expected. We all thought it would be wet but it could have done with a lot more moisture as the berms were a bit powdery and had no base, which made life difficult. To come away with two podiums in conditions I couldn’t get comfortable with is a good outcome for me. Today I pushed harder but made a costly mistake in a heat and crashed twice. The boys did a great job again, as did the mechanics, who were all over the fuel stops. Lachy rode great and got his best XC result ever, and Scotty Keegan was real strong after a big crash on the sighting lap today but he soldiered on and jagged a podium. Damo was a little off today, but when your worst result of the year is a second you can’t really complain.

Lachlan Stanford – 7-7 Outright; 4-4 E2 (Husqvarna Enduro Racing Team):
I’ve never really done so well in the XC, but after being pushed wide in Turn Two I charged through and got a good pace going. I wasn’t making many mistakes and finished seventh overall. The track was really rough, with sharp bumps and sand whoops so it was tough going. Today I had real sore hands so it was hard to hold on until I got warmed up. I was riding tight at first, but I got a couple of good laps in, although there was a little bit of a focus on coming out uninjured as the track got pretty scary. The bike was working really well in the conditions and I’m happy with how I’m going, I’m feeling a little bit faster every race and the stuff I’m working on, is working.

Scott Keegan – 10-14 Outright; 2-3 E1 (Husqvarna Enduro Racing Team):
Yesterday I felt like I could have won, I had the lead for the majority of it but started cramping up real bad in my forearms and legs so I backed down a little but got caught by Tom and didn’t have anything for him because I was struggling physically. Today I had an awkward fall on the sighting lap and knocked my head and got pretty beaten up. I was dizzy at first and a bit dazed all day, so I was pretty much in survival mode. The 250 was spot-on and the team ran perfectly, but I had a few little falls and dropped it in four of the six races so I was very happy to still get third. 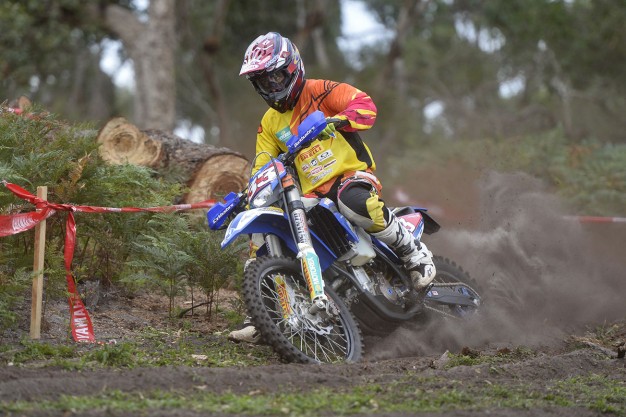 Damien Smith – 1-2 Vets (Husqvarna Enduro Racing Team):
Yesterday was good for me in the XC, I went real well but had to push a bit hard to get in front, so was a bit sore today. It was a tough track, but full credit to Kirk Hutton, he rode really well and I was just feeling a bit under the weather so I couldn’t do much about that. Now we’ve got a break, and I’ve got a few niggling little injuries so a couple of weeks off will be great. But I couldn’t be more happy with how it’s all gone so far.

Geoff Braico – DNF-12 Outright; DNF-6 E2 (Husaberg Enduro Racing Team):
This weekend was a bit of soul searcher for me, I came in with such high expectations but it didn’t go the way I wanted it to. Oh well, you can’t always have good days and I’d like to say a big thanks to my mechanic Drew who never stopped all weekend. I had a freak electrical problem only 20 minutes into yesterday’s XC which put me out, but today I just struggled. The track was pretty brutal and the conditions were way drier than we expected. It was powdery, very sketchy and quite scary in places and I never felt settled so it was a matter of going into survival mode. It’s good to get through that without getting hurt and now we’ll go on to South Australia and better results.

Jarrod Bewley – DNF-6 Outright; DNF-2 E3 (Husaberg Enduro Racing Team):
Bit of a tough one this weekend, I had a miscommunication with my pit and ran out of fuel yesterday, so recorded a DNF. Today we were second in class and sixth overall which was pretty good considering the conditions. Last year was completely different here, the sand had a lot more body to it and would hold you up where today it was just dry and powdery and there were sink holes so it was tricky riding. I played with my setup a little as we went and posted the fourth fastest overall on the last go so that’s pretty good. Overall I stayed consistent with my riding and felt like I was riding pretty well, but Glenn is riding really well so it’s going to be a tough series and I just want to start getting some race wins under my belt.

Josh Green – 2-2 Outright; 2-2 E2 (Active8 Yamaha):
Saturday was good, although I made myself work for it. I came from a long way back but I knew if I kept focussed, I would get back up near the front. In fact, I would have loved for it to keep going, I was feeling that good. Sunday was good and no real issues. I feel like my riding is getting back to where it needs to be and we have only just hit half way in the championship.

Tom McCormack – 9-11 Outright; 1-2 E1 (Active8 Yamaha):
I had some issues on Saturday with my brake that made my come in and get it looked at after the first lap but we got it fixed and I was able to fight my way back to the front of the class from there, so it was a good result. Sunday was good without being great but second is good and it’s important that I keep consistent at each and every round.

Chris Hollis – 4-5 Outright; 3-3 E2 (CDR Yamaha):
It was a bit of a struggle all weekend for me. I felt I rode alright on Saturday but with so many riders in front of me at the start, it was hard to make up all the time. I did as well as I could and was satisfied with the result. On Sunday I just took too long to find my flow. It wasn’t until I relaxed and found some rhythm that I was able to put together some good times and I was the fastest in the last sprint of the day. It’s half way and with six rounds to go I need make sure I finish the second half of the year strongly. The CDR Yamaha team has been great and I’m sure we can continue to improve.