Victoria’s MXD points leader, Tunetech Racing KTM’s Jack Simpson, has won two of the first three rounds of the 2014 MX Nationals, claiming a hard-fought win at his local track at Wonthaggi. MotoOnline.com.au sat down with the 18-year-old KTM 250 SX racer and fired him a few questions about last weekend’s victory and his season so far. 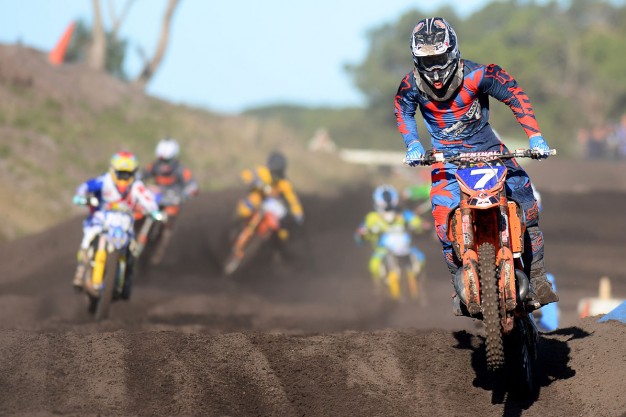 Jack, nice win on the weekend, mate. How does it feel to get two on the trot and take over the points lead?

It feels good to get the season going, for sure. This year I want to stay consistent like Hamish Harwood did last year. I want to keep doing what I do and take the wins as they come. The first round of the championship at Broadford was a bit daunting. A couple of years ago I injured my knee there, then last year I knocked myself out and broke my hand. Basically I just wanted to get through that round in one piece, then we made some changes to the controls and suspension that worked in my favour for the second and third rounds.

You’re from Southern Victoria and have put in a fair few laps around Wonthaggi. Would you say you had homeground advantage at all on the weekend?

I guess I had a bit of an advantage as it is my backyard national track. I knew where to place the bike when the track got rough, but at the same time the track was totally different to any other race I’ve had there. It wasn’t ripped deep enough and was under-watered, which made it quite hard-based and develop a lot of square-edged bumps. On top of that, Jed Beaton used to live town there too, so I knew he’d be fast on the weekend.

What are your thoughts on the weekend and the new track layout?

Usually the track is boggy for practice and then preps up really well for the rest of the day, but this year it was fairly dry to start off with. The top sandy loam all blew off in qualifying and we were left with a hard base for the rest of the day. The big jump and the tightened up s-bends after the first turn were pretty intense and one-lined and the new rollers got squared-edged and cups in the face of them. It was pretty gnarly. Heaps of Lites guys were crashing on one of the tabletops, too. It had a massive kicker in the middle of the up-ramp that caused all sorts of carnage. I knew where to hit it from, so I didn’t have any issues, but yeah, it took down a tonne of riders. You were one of the hot favourites coming into the season. Has the pace of the new kids Jed Beaton, Egan Mastin and Nathan Crawford surprised you at all?

Not at all. There are always young guys coming through who are looking to knock you off. I go by the theory that I respect all but fear none. If I look after myself, let the racing come to me, get good starts and be consistent, I think the results will come. The biggest change for me from last year is learning to be consistent and mature in my racing. Last year I got a bit too hyped up on race day and tried to win everything, and it let me down in the long run.

It seems hard to believe, but there’s only one round left before the MXD class hits its mid-season break. How are you going to approach round four at Murray Bridge?

I want to go in with a clear vision and just focus on getting on the podium and grab two solid starts and races. If I can do that and retain the red plate I’ll be happy and I’ll build my points buffer on Jed. I only pulled a three-point gap on him at Wonthaggi, because Wayde Carter was penalised three places for using a hot-line in the last race and that meant Jed and Egan both made the podium.

It’s definitely a tight race between you three so far and we’re looking forward to seeing what goes down at Murray Bridge. Thanks for the chat, mate.

No worries. Speak to you soon.