In one of the tightest round finishes Australia has ever witnessed, NPS Monster Energy Kawasaki’s Adam Monea broke through for his maiden MX1 win at the Wonthaggi round of the Monster Energy MX Nationals on Sunday.

MotoOnline.com.au caught up with the 25-year-old Victorian to get the story behind the three-way tie between him, Matt Moss and Kirk Gibbs and to find out what the round victory it means to him personally. 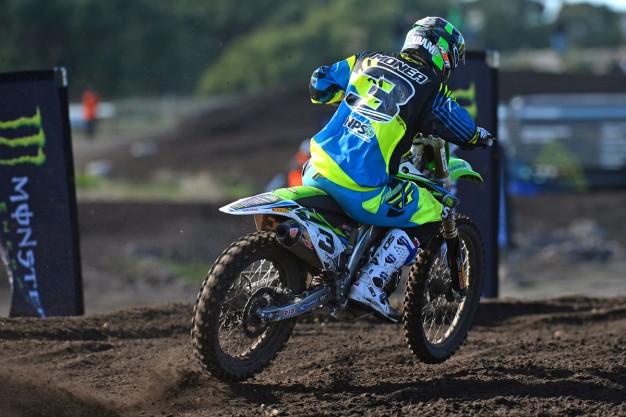 Monz, congratulations on your first overall victory, mate. Was this your first-ever pro overall win?

It was my first MX1 overall win, but I did win the Murray Bridge round of the MX2 class back in 2008. So yeah, it’s been a long time, but it’s all good and I’m so pumped. You know how hard we work for this and it’s massive to do it in front of my friends and family.

I scored a podium finish here last year, but on Sunday it was weird because we didn’t have any idea who’d won the overall, seeing as myself, Kirk and Mossy all finished on 60 points after the second moto.

Yeah, how crazy was that? You, Gibbsy and Moss were all locked up on 60 points at the end of the day. That proves just how tight the MX1 field is this year.

Definitely. Matt went 2-4, I went 3-3 and Kirk went 1-6, so it was the consistency that really helped me win. If Super Pole counted towards round points like it did in 2013 I wouldn’t be speaking to you right now, so I’m pretty glad the rules changed!

And like you said, y’know, it proves just how close the fast guys are. The contenders every weekend are myself, Matt, Jake [Moss], Kirk, Billy [Mackenzie] and now Cody [Cooper] is back as well. The racing between us front-runners is tight and you can’t slouch.

Is it frustrating winning the overall, but still having Mossy extend his points lead in the championship with his Super Pole win?

Oh, yeah. I’m not going to lie; I’m gutted he pulled three points on me even though I won the overall, but that’s the way it is. My aim now is to beat him fair and square and pull some of those points back before the gap gets any wider. 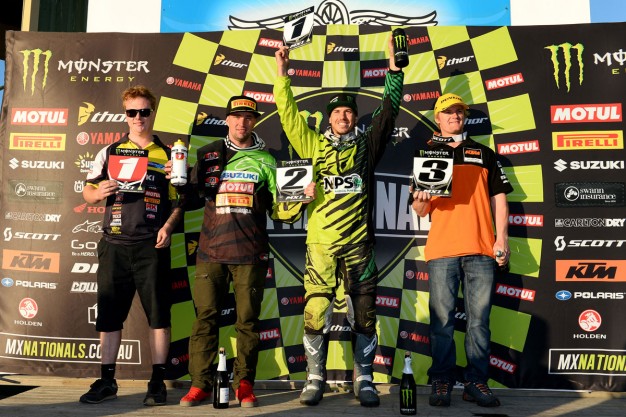 With you and MXD rider Jack Simpson both winning your classes, it seems local knowledge plays a big part to conquering Wonthaggi. What did you think of the track and the new layout?

We grew up racing there, but the track we rode on the weekend was completely different to what we normally ride. It wasn’t ripped anywhere near deep enough and it didn’t have that real sandy loam we were expecting. It was hard, kinda skatey and some of the bumps felt like they were there from last year.

The new big step-up was good though. There were a few people freaking out as they hadn’t hit a big jump like that in a while at the nationals, but personally I think every nationals track needs at least one big jump, if not five. We’re Australia’s best racers, and the tracks need to start reflecting that. Three-foot-high singles ain’t cool.

As for having a local advantage, I think it’s more about having your friends and family there supporting you. You can talk shit with your mates and relax a bit more instead of sitting by yourself in the truck waiting for the next race.

The Kawasaki team seems to have a completely different feel to it this year from last year. Why do you think that is and what’s changed?

I guess we’ve worked really hard on the new bikes and left no stone unturned, so our machines are a lot better. Having Jake on board now as some fresh blood has also helped. He’s so fast and I’m really competitive; if I’m not beating anyone else I definitely always want to beat my teammate.

But it’s been a healthy rivalry and we’re having a lot of fun as well. We’re racing dirt bikes at the end of the day, and they’re designed to have fun on. That’s the whole reason we got into riding in the first place.

Good stuff, buddy. Enjoy the win and we’ll catch you at Murray Bridge in a couple weeks time.

Will do. Thanks, mate.