The vitals from round three of the Australian Motocross Championship.

With Wonthaggi’s third round of the Monster Energy MX Nationals, Australian Motocross Championship, in the books, MotoOnline.com.au dissects the information that counted come Sunday afternoon. Rider comments:
Adam Monea (NPS Monster Energy Kawasaki)
I’ve been waiting and I’ve been working hard for the overall for a while and I know I’ve been ready for it so to get it here at my home race and share it with family and friends is awesome. It’s really special! I am a little bit disappointed that I didn’t take advantage of the opportunity I had when I got in the race lead in the first race. That would’ve helped the round win come a lot easier but at the end of the day I’m on the top step and that’s all that matters!

Matt Moss (Team Motul Suzuki)
To finish tied on points for the day is good, definitely not a bad result. We weren’t able to win any motos today and I hadn’t ridden in almost two weeks coming into this round, so it’s a bonus to increase my championship lead. Like always Team Motul Suzuki was great and the RM-Z450 for me is the bike to be on. We will keep getting stronger from here and I’m enjoying the challenge so far in 2014.

Kirk Gibbs (KTM Motocross Racing Team)
The win was good but I’m pretty disappointed about the second moto. I just didn’t ride very well – didn’t have the good lines and struggled a bit. In that first race I rode smart, and it pretty much came to me as I made my way through, but in the second one it took me 15 minutes to get going and by that time there was too big a gap to catch Cody and get the overall. But I’ve got to take the positives; to get a moto win is great and my speed is good, over the last few years I’ve been a little inconsistent, so to be sitting with three podiums from three rounds is a good thing.

Jake Moss (NPS Monster Energy Kawasaki)
I’m a bit disappointed. It was crunch time and I felt I had to win but I struggled a bit from having not ridden for two weeks because of a sore tail bone and things didn’t really go to plan. Second in the last race was a good rebound though. I’ll have a week off now and really heal up properly before I start training again for Murray Bridge. That’s a track that I love so hopefully I’ll get it onto the top step there.

Rhys Carter (Team Motul Suzuki)
I’ve been really consistent, which is positive, but in the first race I should have made the pass and been fifth. In the second moto I got a good start finally, but made a few mistakes and tightened up. I couldn’t put a charge on, kind of went backwards so that was disappointing. In saying that, I know where I can and should be, so it’s a matter of working on my intencity and moving forward from here.

Brock Winston (Husqvarna Motocross Racing Team)
I cracked my ribs in that second last race at Coolum last weekend, and on the start line for race one I told my mechanic that I didn’t think I’d be able to finish. But I put everything into it and was actually fifth for most of the race before running off the track and ending up seventh. Without being able to use those muscles in your torso I really couldn’t hold myself forward or breathe properly and the harder I’d get on the gas the worse it would be. I could only manage 13th in the second Moto, and I have to be happy with that for today.

Note: Riders/teams are welcome to submit quotes for publishing to [email protected] 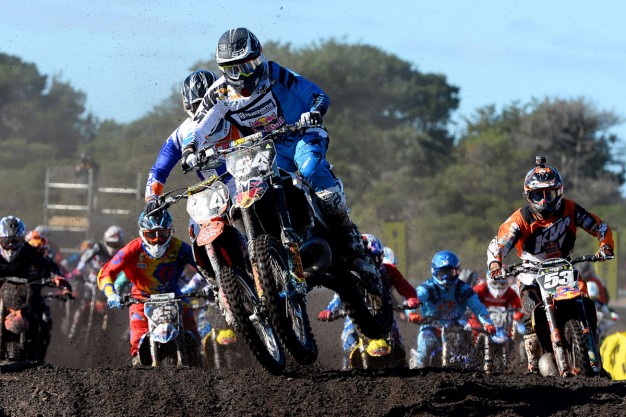 Rider comments:
Kayne Lamont (Red Bull WIL Sport Husqvarna)
I qualified fourth which I was reasonably happy with, and after starting about eighth in the first moto I struggled in the early laps, before battling with Clout for most of the moto. The race leader crashed on the last lap which put me up to second in the two corners to go and I nearly got through. In the second I was into the lead by the second turn, but they put so much water on the track it was like ice, so I had to struggle to stay upright. I had to be calm and make my lines, and I managed to do that and run away with the win. I loved the track, the jumps remind me of home. I’m feeling pretty much back to normal now so hopefully next round will be a good one as well.

Luke Clout (Serco Yamaha)
Qualifying and moto one went well. I was able to generate good speed and make the passes when I needed to. I just had it in my mind to pass whoever was in front of me without thinking about my position in the race and I managed to pull off the win. Race two and I just couldn’t get the same flow going. I was getting frustrated and think I was almost trying too hard and as a result not flowing and making mistakes. But second for the day is good and I keep the red plate. I want to work on making my second motos better, so that’s my goal for round for is to put two motos together of fast and consistent racing.

Hamish Harwood (CMR Red Bull KTM)
I’ve been working really hard on the starts and I got two good ones today – it’s amazing what that does for you! I loved the track; it got rough and gnarly today and it quite suited me. I’m just really trying to make every round count and not have a bad one so I can keep working forwards. Now I’m just looking forward to the rest of the sand tracks and working hard on my fitness. The main thing is to stay consistent and up front in every round. I’m rapt at how I’m going this year, I was hoping to be top five by this stage and work forward so to have two podiums already is fantastic.

Jay Wilson (Serco Yamaha)
I felt like I was riding pretty well and there were a heap of riders that were pretty evenly matched so making passes and charging forward was hard work. I mistimed my start in race two and was way back and as they had watered the track during the break, it was more difficult to get by the other guys.

Geran Stapleton (Raceline Pirelli Suzuki)
Today wasn’t too bad; I feel like in that first moto I threw it away a bit, with only a lap and a half to go. All in all it was a good day considering I haven’t ridden but I’m just a bit disappointed to throw away a win in that first moto. In the second race I guess I just had nothing left after going all out in the first one. I kind of surprised myself this weekend, I hadn’t ridden at all since Broadford so I’m feeling pretty sore right now. I thought I was a little healthier than I was so I’ll take this week off and then it will be five weeks since breaking my back and sternum. Hopefully by the next round things will have settled down a bit more and I will be right for Murray Bridge.

Jake Emanuelli (Wilson MX Honda)
In the first race I got a really bad start, so I had to push really hard in the first 20 minutes of that moto to get up with the top guys, so I was pretty worn out by the time I got there and finished that race in 12th. In the second one I got a much better start and I just charged up, and got into sixth and started catching fourth and fifth. I tired out though and got passed by a couple of riders, but I finished in eighth so it’s a big step forward from the last round. I’m very happy with my result today. The first round at Broadford I was a few seconds off the pace, but I have been training really hard and my lap times are up with the top guys, so if I can get a good start I think I will be all good.

Nick Sutherland (Husqvarna Motocross Racing Team)
I as up in eigth with the lead pack but there was this jump that was just destroyed and had a big kicker that caught a heap of people. I had a massive one and hurt shoulder pretty bad. I’ve been to the doctor this morning, and there’s a few things it could be – I’ll have a scan tomorrow to find out the extent of it, but there’s very little movement. I rode the second race and was up front for half half of it but just couldn’t keep it happening and faded back.

Ryan Marmont (Raceline Pirelli Suzuki)
In the first one I just had a silly crash, and really I was lucky to walk away from it uninjured actually, it was quite nasty. I just had to regroup after that and try my best to turn my bad day around and still salvage some points. It’s definitely not the way I want to approach the weekend, but we’re safe and I’ll be ready to go racing next round. It was hard going into the second moto having not seen much of the race track all day and just heading out there and going for it in the last one. But that’s racing and you just got to do what you can and move forward to the next round.

Dylan Long (BBF Motorsports KTM)
I felt really good coming into Wonthaggi, we have been making small changes to the bike to make me feel more comfortable. Due to tendon damage in my wrist, I have been unable to do a lot of training on my bike which frustrates me. I remain positive that everything will change for the better soon, and I would like to thank all my sponsors for their continued support.

Note: Riders/teams are welcome to submit quotes for publishing to [email protected]