The Team Motul Suzuki rider has taken another step forward in 2014 coming off the back of his first MX1 title last year, which will take a special performance to halt over the course of the season.

MotoOnline.com.au spoke to Moss directly following the podium celebrations on Sunday to get his take on the weekend and his early-season form. 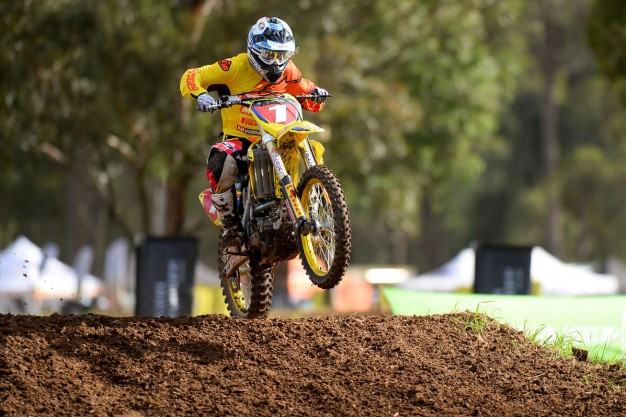 To get two wins from two rounds is great, you know? We’ll keep building, but I’m sure there will be challenges; Jake is riding really good and Kirk Gibbs is riding good as well. We’ll just keep going the way that we are and not get ahead of ourselves or anything like that and it should be good.

As far as laps led today, you were right up there obviously. You were in control of both motos, but Jake was there shadowing you in both of them as well. Is that something you enjoyed? It seemed like you had a lot of fun out there today.

Yeah, I did. I actually prefer to be in second [laughs]. I tend to ride a little bit tight when I’m in front. It’s good having your twin brother to race with, you know he is not going to take you out or do anything stupid. The pressure was there a little bit and he rode really good.

I’m pumped for my brother to be honest because he was in my shadow a bit, but I’m sure he is getting out of it now. I would be happy for Jake to beat me and I’m looking forward to the challenge. I’m more happy for my brother at the moment. I lead every lap pretty much this weekend, so I’m happy with that. I spoke to Jay Foreman after moto two and he said compared to Coolum last year he feels like you’re even stronger than then. You worked hard during the off-season and you went to America as well, so there wasn’t much time for rest. Do you feel like you’re stronger now?

I think I am. I don’t think the best of my riding has quite come out yet; I’ve been riding a little bit tight. I’m a bit defensive trying to maintain that red plate. As the rounds roll in, I’ll loosen up a fair bit and try and go a bit faster. I know I can go a lot faster than what I have been, so I’ll just keep going the way that I’m going.

What about the track today, there was a lot of rain leading into this event, but it ended up dry. How was it out there?

Appin always do a great job! We ride here every Tuesday and most weekends. They tend to try and make the other track for the non-pro riders and it’s the one that we usually practice on, so we don’t get much time here, but every time we get onto this track it is a good race track. It sorts the men out from the boys. It’s credit to them, each year they deliver the goods, so I’m happy.