2013 Australian Motocross and Supercross Champion Matt Moss came into the opening round of the 2014 Monster Energy MX Nationals as a virtually unanimous favourite to claim back-to-back championships.

While he came away from the opening clash at Broadford with the points lead, he certainly didn’t have it all his own way, winning only one of the three 20-minute motos, but was consistently in the top three in every race.

With the sweat still running from his face, MotoOnline.com.au caught up with Mossy to get his take on what was an eventful series opener. Matt, congrats on claiming the overall, but it looked tough out there. How would you rate your performance today on a scale of one to 10?

Probably about a 6.5. I didn’t quite get the ball rolling early and I didn’t feel good. The track is normally my favourite of the series but it didn’t suit me today. I wasn’t too impressed with my day, but it’s one of those bad days where you still come away with the win.

I think one of the big things today was catching a glimpse of who are going to be threatening me this year – definitely my brother, Jake, Adam Monea and Kirk Gibbs. Us young guys are definitely on a charge. If Jake rides like he did in that last race he’ll be hard to stop.

You sorta touched on it just then, but there are a lot of young guys up the front this year. Do you think there’s been a bit of a changing of the guard over the past 12 months?

Oh definitely. Racing has changed and the intensity is a lot different now. It’s so fast now and we push ourselves from start to finish, where back in the day you’d go fast for a little bit, then settle in and ride at your own pace, then come home strong. It’s not about that any more – we have to start fast and hold that same intensity all race.

What did you think of the track today compared to last year? 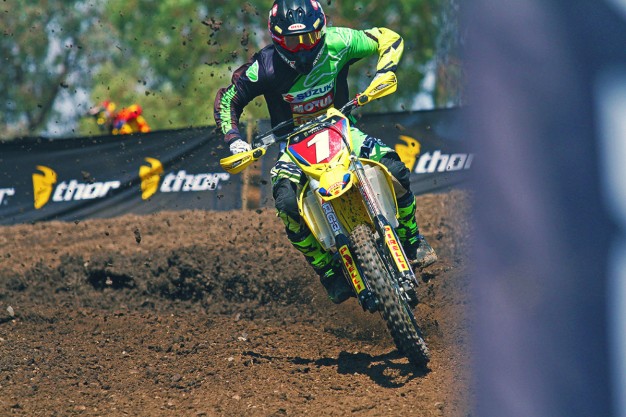 You’re in a different position now compared to this time last year. Now you’re the full favourite to take the 2014 championship. Do you feel like there’s more pressure on you now?

Not really. I think I’ve put myself in a better position. I wouldn’t say it’s pressure, but I’m giving myself the best shot at winning the championship again.

It was a tough one last year against Todd Waters, and you know, I went 5-5 at the first two rounds last year. I’m looking to change that to a 1-1 and I got half of that job done today and have the red plate going into the second round.

Appin is probably your home round of the championship and you’ve had pretty good results there in the past. You must be looking forward to the series heading there in two weeks’ time.

Yeah it’s one of my favourite tracks and I’m pretty excited about it. I’ve got my brother coming down to ride with me the next couple of weeks so that’ll be good. I’ve been struggling to ride with people who push me and have the same speed that I have.

With Jake and I, either one of us is fast or the other one is, so it’s going to be great for both of us to get back together, put some solid riding in and chase each other.

Jake was a bit unlucky today when he fell in front of me while leading the first moto, but I’ve got a feeling we’re going to be closely racing each other all year.

Nothing like a bit of sibling rivalry to keep you motivated! Great work today, mate. Catch you at Appin.