The vitals from round one of the Australian Motocross Championship.

A new feature for 2014 is Breakdown on MotoOnline.com.au – an informative collection of details where you can see the standout performances of the round in the pro categories of the Monster Energy MX Nationals. Moto one podium: 1. Adam Monea (NPS Monster Energy Kawasaki) 2. Matt Moss (Team Motul Suzuki) 3. Kirk Gibbs (KTM Motocross Racing Team)
Margin of victory: 5.423s
Fastest lap: Matt Moss 1m53.235s
Talking points:
– Cody Cooper (Penrite Honda) a notable non-starter after injuring his cheekbone and eye socket in practice.
– Moss brothers tangled on the top section of the track after Jake went down first; Matt remounted for second while Jake DNFs.
– Monea assumed the lead after the Moss clash, controlling the race from there to a “dream” victory.
– Kade Mosig (DPH Motorsport Yamaha) was up front in second early for a solid 450 debut.
– Brad Groombridge (Byrners Suzuki) dropped out of the top 10 late in the moto after a positive start.
– Hayden Mellross (Raceline Suzuki) got progressively stronger in a promising performance.
– Mackenzie and Rhys Carter (Team Motul Suzuki) both worked their way up the order throughout the moto.
– Gibbs braved the pain of a broken knuckle for a top three straight up.

Moto two podium: 1. Matt Moss 2. Jake Moss (NPS Monster Energy Kawasaki) 3. Gibbs
Margin of victory: 4.388s
Fastest lap: Jake Moss 1m52.438s
Talking points:
– Sam Martin (DPH Motorsport Yamaha) involved in an early incident, putting him at the rear of the pack, climbing to 16th.
– Mackenzie went down hard on lap two, unable to start his YZ450F for a long time before returning to the mix and salvaging 12th.
– Mellross again shines, comfortably inside the top 10 amongst the established stars, as is Jacob Wright (Tattoo Racing Suzuki).
– Gibbs/Monea battle one of the most exciting on track throughout the moto.
– Privateer standout Groombridge impressive, challenging the factory riders after a top NZ season.
– Teenager Jesse Dobson stands out in 11th, behind four-time champ Jay Marmont (CDR Yamaha).

Moto three podium: 1. Jake Moss 2. Monea 3. Matt Moss
Margin of victory: 6.443s
Fastest lap: Jake Moss 1m51.252s
Talking points:
– Jake Moss led early and controlled the race, from Monea and Matt Moss.
– The victory for Jake Moss came despite a broken seat he had to race with during the moto.
– Gibbs and Mosig did battle throughout the moto – another entertaining emerging rivalry.
– Wright was in the mix again, pushing inside the top five until a late problem saw him drop to 18th.
– Brock Winston improved aboard the Husqvarna, breaking into the top 10 for the first time as an MX1 rookie
– 14th secured Lewis Woods (Suzuki) the honours of registered ‘South’ privateer series round one winner in MX1. 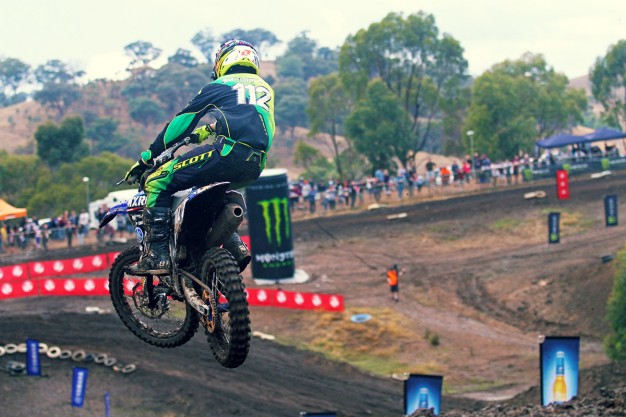 Moto one podium: 1.Kayne Lamont (Red Bull Husqvarna) 2. Clout 3. Errol Willis (Yamaha)
Margin of victory: N/A
Fastest lap: Clout 1m56.541s
Talking points:
– Clout set the pace from the outset, until a gearbox malfunction set in late and dropped him to second.
– Lamont was smooth and controlled, taking advantage of Clout’s troubles in a breakthrough victory on the Husqvarna two-stroke.
– Willis, Daniel McCoy (TM Racing), Wade Hunter (KTM) and Kale Makeham (Tunetech Racing KTM) circulated in that order throughout much of the race in positions 3-6.
– Jay Wilson was one of many casualties during the moto after crashing hard and being credited 34th.
– MXD champion Hamish Harwood shines on debut in eighth – his day would only get better from here.
– Brenden Harrison (Instant Security KTM) made his return after two seasons out for a top 10. His day too would also rise.
– Meg Rutledge (Kawasaki) scores points with a 27th place finish.
– Six two-strokes in the top 10, four four-strokes.

Moto two podium: 1. Harrison 2. Lamont 3. Makeham
Margin of victory: 5.847s
Fastest lap: Lamont 1m54.610s
Talking points:
– Nick Sutherland (Husqvarna Motocross Racing Team) went down in the first turn on lap one.
– Harrison led from lap one, controlling the race in commanding fashion for an emotion-charged victory.
– McCoy and Willis were outside the top 10 early, but worked their way forward in formation.
– Serco Yamaha teammates stuck in the mid-pack throughout the moto, eventually climbing to 12th and 13th.
– Privateer standout Caleb Ward (KTM) a superb sixth.
– Hunter again in the spotlight as top finishing four-stroke in P4 while two-strokes sweep the podium.

Moto three podium: 1. Lamont 2. Hamish Harwood (CMR Red Bull KTM) 3. Clout
Margin of victory: 4.823s
Fastest lap: Lamont 1m55.512s
Talking points:
– Carter, Makeham and Geran Stapleton (Raceline Pirelli Suzuki) down in turn one – the latter two slow to get up and return to the track. Stapleton out.
– Harrison outside the top 10 on lap one, crossed the line in 11th, but fought back into the top five.
– Clout benefited from a better start in this moto, inside the top three and he would stay there.
– McCoy ruled out with a heavy crash while running sixth, ending his day early.
– Soon after, Willis suffered a technical issue to DNF out of fourth.
– Kiwi duo Lamont and Harwood led from start to finish in 1-2 – the result securing Lamont the overall.
– A charging fourth for Nick Scott (Yamaha) netted him fifth overall for the round. A privateer on a four-stroke!
– Daniel Banks (KTM) sneaks inside the top 10 for ninth, another emerging privateer talent.
– Luke Arbon made his best performance of the round, claiming seventh in the end after just two days on the Husqvarna.