Well things certainly went a bit wacky in Toronto, no? A lot of people have awarded Adam Cianciarulo of the Monster Energy Pro Circuit team and Monster Energy Kawasaki’s Ryan Villopoto their respective titles. Villopoto has over a race lead and Cianciarulo had almost a race lead. And both riders looked pretty dominant in getting those leads.

But then we went to Toronto for round 12 of the Monster Energy AMA Supercross series and all hell broke loose. Let’s take a look back at the crazy Canadian round and focus on the news going forward from here.

With Villopoto awaking with a serious stomach aliment that forced him to the hospital and to miss all three practices- the race was thrown into chaos. Eventually he raced and finished a very credible sixth but with Yoshimura Suzuki’s James Stewart running away with the race (a truly amazing ride from around 18th to first in just 14 laps) and collecting his fourth win of the year (tops in the series) and Villopoto’s points lead was cut to 39 in front of Stewart and 25 in front of Red Bull KTM’s Ryan Dungey.

There’s still good money being put on Villopoto to win his fourth supercross championship in a row but what if he has another bout of this illness or crashes out of a race? Stewart looked so good in Toronto and I don’t have faith that Dungey can beat Villopoto head-to-head, but what if Stewart starts getting into the mix? With five rounds left, could Villopoto lose this thing? I doubt it but it just got a whole lot more interesting after Toronto. 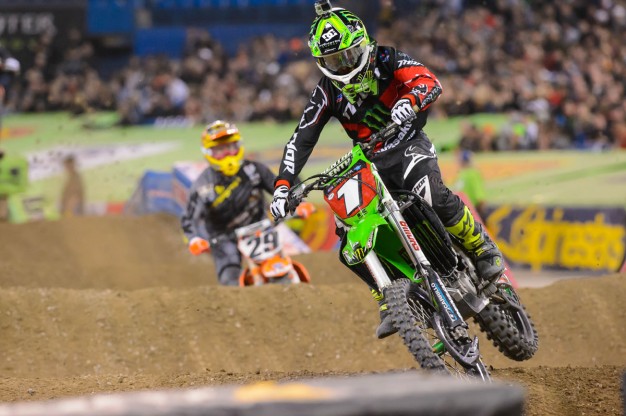 There really isn’t anyone in the know that thinks Justin Barcia is going to stay with Honda next year. He looks to be heading to the JGR Yamaha crew but his miserable 2014 season got a little better after Toronto. Looking good right from the first time he took the track, Barcia led laps and got his best finish of the season in securing the runner up spot from Stewart.

Yeah sure, no one had anything for James Stewart on this day-he was on another level, but Barcia rode great. He looked happy out on the track- you know what I mean? Maybe not but trust me, he was very good. Let’s hope this can get him back to that level he was on last year.

Adam Cianciarulo had a rough Toronto. And me being Canadian, he’s already blamed this all on me. The rookie showed up with a nice lead and a whole bunch of wins but early on in practice he went down in the whoops and knocked himself a bit koo-koo.

Once he recovered from that he tried to put some fast laps in but in the tough whoop section his shoulder dislocated. Adam got it put back into place by the medics and taped it up to try and ride the main event but it popped out again and just like that- poof, Cianciarulo’s season is done.

Turns out it’s the same shoulder that he had trouble with as an amateur and the doctors actually found something wrong with it when they looked at it. So three to four months for recovery is the prognosis and I doubt we’ll see him until 2015. Oh my how things change in this sport.

So just like that we have two riders left in contention for the now-vacated points leader Cianciarulo. Unless you want to count in Adam’s teammate Blake Baggett who is almost a race back. Because I don’t. 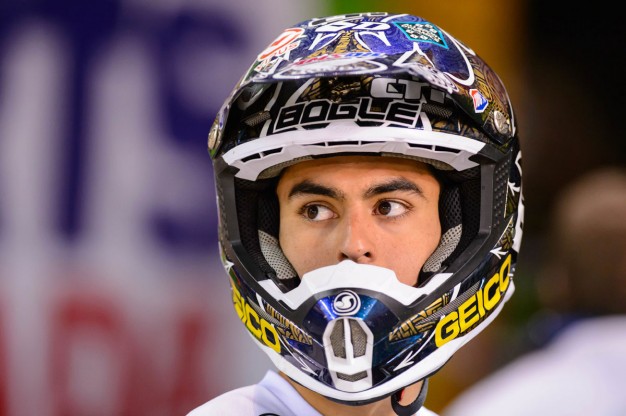 The two riders are Martin Davalos (the third Monster Pro Circuit rider) and GEICO Honda’s Justin Bogle. Both riders are pretty fortunate to be in this position. Bogle broke his back among other things before January and wasn’t even supposed to race supercross and Davalos, well he’s been in the class for nine years and hasn’t even sniffed a title fight in any of those years. But here they sit, both getting first career wins this season and Davalos holding onto a 5-point lead with three rounds left.

Bogle’s got the momentum (a second and a first in the last two races) but Davalos has the lead and the speed (see what I did there?). Martin crashes too much for my liking but Bogle has never been in this situation before-where everyone is looking at him.

At least Davalos has had the pressure before because he’s been the fastest guy on the track, won heat races and has been the pick to win a title for a long time. He’s just never come close to doing it. This should be a fascinating look at how two riders that have never won anything as pros (until this year) handle some real serious championship pressure.

They were both thrown into this and so let’s see who does what with the chance. My money’s on Bogle but either way, this is pretty great for us fans.