2012 MX Nationals Under 19s champion Kayne Lamont has started 2014 with an almighty bang by dominating the 2014 New Zealand MX2 Championship.

The 20-year-old Kiwi proved he’s tougher than an old gumboot by pushing through the pain of an urgent appendicitis surgery to clinch the title with a race to spare at Taupo over the weekend.

MotoOnline.com.au caught up with the Red Bull Husqvarna racer to find out what went down, and his plans to race the MX Nationals this weekend. 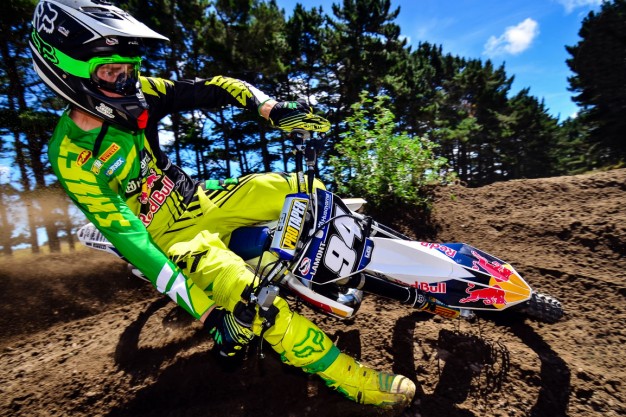 Congrats on winning your first senior NZ championship. From all accounts it sounds like you dominated the NZ MX Nationals this year.

Yeah it went pretty good. I won all three races at round three at Pukekohe a couple of weeks ago, and finished either first or second at each of the other rounds. We’ve put in a lot of testing and changed up my gym program and diet, and I think it’s paid off for sure.

I’ve gone back to racing a two-stroke again this year, on the Husqvarna TC 250, so we’ve been paying a fair bit of attention to building my strength so I can hold onto the thing.

Looking at the results, you finished well down the field at Taupo. You even had a DNS next to your name for that final moto after you’d wrapped up the title. What happened?

On Thursday afternoon I played golf with Brad Groombridge and I’d felt crook all day. 10 minutes into my drive home I had to pull over and vomited my guts up for 15 minutes on the side of the road.

I managed to get back in the car and drive 30 minutes to home, then we went straight to the doctors. They diagnosed me with appendicitis, so we then drove to Rotorua hospital, and I was on the surgery table four hours later.

So you had your appendix removed just two days before the final round?

Yeah, it was keyhole surgery. I told them I needed to race on the weekend, so they took their time and did a great job. The surgeons said I’d be okay to race, although there was a slight change of causing a hernia.

I strapped it pretty heavily on Saturday. In qualifying I managed to pull the second-fastest time, so I was really happy with that. In the first moto I was second for most of the race, but had a spill. I was in a bit of pain, but I picked the bike up in fourth and managed to hold it.

We did the math before the second race and realised I needed to finish third or better to win the championship. I definitely didn’t want to go out for a third race, so I gave it everything. I got my worst start of the whole series and was in fourth place all moto, but slowly reeled in Jay Wilson and pass him on the last lap to take third place and claim the title.

My legs were gone and I had a huge stomach cramp, but I was so relieved to cross the line. There was no need for me to go out in the third race, so I sat it out. I didn’t need to push myself and want my body to be as ready as possible for round 1 of the MX Nationals this weekend. 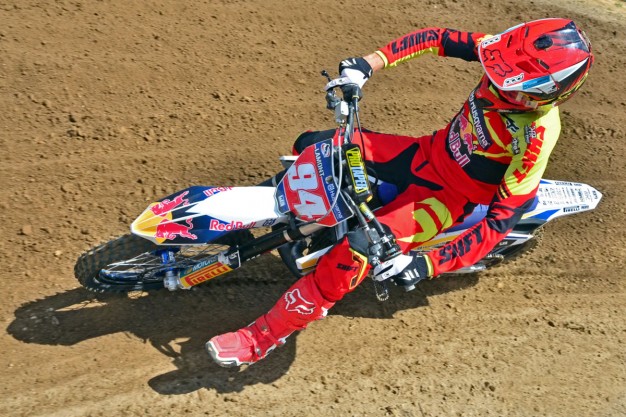 Far out that’s a solid effort. As you mentioned, you’ve changed from a four-stroke KTM to a two-stroke Husky for 2014. How has that change been?

The biggest thing is the power difference. The two-stroke is a lot quicker and we’ve had to do a lot of work to make that power tractable and not quite so ferocious. We’ve done a lot of suspension testing to find the perfect setting to gain traction without spinning the wheels.

Apart from that though, the bike feels pretty much identical to the KTM. There were a few little set-up changes, but the parts actually come in KTM boxes, which is pretty funny.

Now, you mentioned just before that you’re coming over for the MX Nationals. What’s the go?

Well after Woodville, Jeff [Leisk] started talking to us to try and get me across for it, and from then on my results have got better and better. Husky Australia is giving us a bike and I’ll be riding in Shift gear through Monza Imports.

We’re talking to a few people to try and find ways to cart the bikes around, which will be huge for us. We’re doing it all as privateers again this year, so we’ll have to pay for all flights, accommodation and stuff like that. Hopefully we’ll surprise a few people and make a good run for that MX2 title.

You’ll definitely be coming in as a dark horse. Very few people I’ve talked to tip you as a contender, mainly because they didn’t know your plans to return.

Yeah I like it that way [laughs]. If I can stay consistent like I have been so far I know the results will come. Racing the MX Nationals and the des Nations last year has made my racing mature quite fast. I’ve got a whole new perspective on motocross and racing now.

Also, last year I broke my collarbone in February, so I was a long way off the pace at the start of the MX Nationals season. This year my confidence is a lot higher and I’ll be out to take the top step of the podium for sure.

Looking forward to seeing how you go this weekend, bud. Rest up and we’ll see you at Broadford.