Yeah sure, lots of people know all about what happened at Daytona, who won and what the superstars of the sport like Villopoto, Roczen and Stewart did. That’s old news bro.

I’m here this week to tell you about some riders that are having pretty good seasons that really not many people will talk about. There are a segment of riders that make up the bottom of the 450SX main event that are incredible riders. They’re just not as incredible as Villopoto, Roczen, Stewart, etc, and often finish a lap down to the big dogs.

But make no mistake about it, if any of the below guys showed up at your local track, you would be blown away by how good they really are. It’s unfortunate that our sport is such that we don’t get these guys enough press. And seeing as how I’m in the press, I blame me.

I’m here to right the wrong! And with that, here are four riders that are having good seasons that you haven’t read much about…

Down in 17th in the points is the oldest guy in the class, Nick Wey of the Mafia Moto Team. Wey, in his 17th year of racing professionally missed the main at the first race of the year but hasn’t missed out since. He’s got a season high of 13th three times and as any solid vet out there, he’s got a good fan base around his truck at every race. 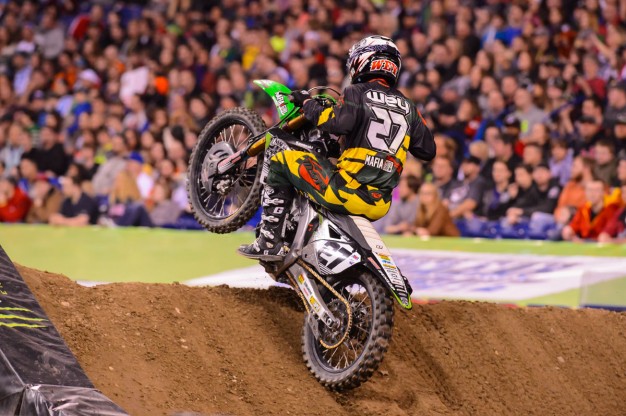 Wey owns and operates his own team and his personality and love for the sport is an asset out there. Wey suffered a bad back injury at Millville in 2012 that knocked him out for the 2013 supercross season. He came back for the motocross nationals last summer and struggled to regain his usual form.

And when he missed the first race this year there were definitely some doubts that the crash knocked some wind out of his sails for good. But he had rebounded nicely since Anaheim 1 and is a fixture in the main events now. The sport is better when Nick Wey is in it, it’s that simple.

24th in the points is long-time privateer Chris Blose who is without a doubt doing the most with the least. Blose does not have a ride with any team at all. He is a complete privateer in the truest sense of the word. The Factory Metal Works team takes his bike around during the week but on the west coast he was out of his pick-up truck.

At one time one of the top privateer riders in supercross and a member of Troy Lee Designs and Hart and Huntington, Blose is on the backside of his career but he still has some skills. He’s missed two out of ten mains this year with his best finish coming at Indianapolis with a 14th.

A rider can make about $2200 a weekend if he makes the main and after entry, travel costs and all that Blose probably leaves with a profit of $1000 each weekend. So it’s not a bad living but it requires living on the edge. Chris Blose is a working man’s supercrosser. One point behind Blose is ‘Top Jimmy’ Albertson who’s also made eight out of ten main events this year and like Wey, has a whole team based around him. Albertson is a solid rider indoors and probably a bit better outdoors to be honest but he makes it work.

Having the new Motosport Crossland Racing team built around you is probably some pressure but Albertson is having a decent season. And in the pits people, like Wey, seem to want to gravitate to this privateer to talk to him. Albertson and wife Georgia have a web video series that chronicles their team at the races every week, which is a cool way to give back to the fans of the sport.

Nick Schmidt is quite a bit younger than the above riders we just talked about and is in a little different position than those other guys. Nick’s trying to make a name for himself at this game called supercross and doing a pretty good job at it.

Schmidt’s part of the Teddy Parks Privateer Journey where a guy named Teddy Parks (duh) charges a flat fee and takes a whole bunch of riders bikes to the races. Schmidt’s in that group of guys who are on the bubble of each main event.

This year he’s made six out of 10 mains and sits 27th in the points right now. Schmidt’s a good guy, he’s got good skills and seems to be a good starter. He’s got a bright future ahead of him and like the other guys I have listed, he’s a great rider.