Australian racer reflects on Arenacross experience in the UK.

Dan McCoy has returned to Australia after a successful campaign in the 2014 Garmin Arenacross UK Championship, where he took home second overall aboard the factory Yamaha team.

MotoOnline.com.au caught up with DMC to find out what he thought of the UK experience, how it all came about, and how his preparations are going for the 2014 MX Nationals. 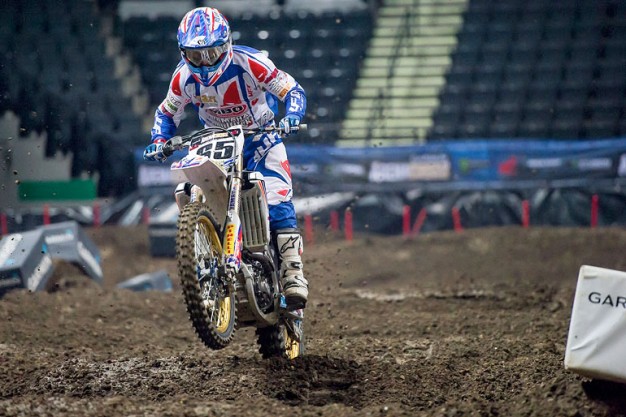 Dan, congratulations on scoring a podium finish in the UK Arenacross, mate. How did the opportunity to race over there come about?

Thanks, yeah the promoter contacted me as the Australian Supercross Championship was starting here and asked if I was interested. We went back and forth for a while, then I didn’t hear anything else.

Then between Christmas and New Years he hit me up and said I had a ride with MBO Sports Yamaha, which is the factory team over here. I’d just done a magazine test on the YZ450F and liked it, so I said ‘yeah righto’.

I forwarded the team some factory suspension settings then flew over. I only managed to ride the bike for 20 minutes at an indoor track to get a feel for it before we flew to Ireland for the first two rounds.

Wow, that’s hardly ideal preparation. What were your best results through the series?

I won a few of the one-on-one shootouts and heat races, and picked up two second places then a third at the last round. At one round I landed on a guy, which tore something in my lower stomach and I was pissing blood.

I went to the hospital later on and nothing was torn, but the impact from landing on the bike bars had caused the bleeding. I still made it into the main and just rode around in heaps of pain. I finished eighth, which kinda screwed up my championship hopes.

So what was the series like and how big is the Arenacross scene over there?

It’s really similar to the old Supercross Masters that Phil Christensen used to run here. The tracks were held on ice hockey rinks, so they were really right and had mid-20-second lap times. The problem with the series was it rained every day, so the dirt they brought in for the tracks rutted out like crazy and was actually pretty dangerous to race on.

The crowds were unreal and all seven rounds had riders from about six different countries, including Italy, France, South Africa and Australia.

The MBO Sports Yamaha team must’ve been pretty pumped on your results, especially given the short notice you had to come over.

Yeah the team was pumped. They have Kristian Whatley on the team, who’s the current motocross champion, and they expected big things from him, but they had no idea about me. Every team wants to win, but they were pretty happy considering.

Things are done a bit differently there. The promoters have a lot to do with the teams; in fact, the teams get paid to do the series and there are no entry fees for riders. But the catch is each team has to have two riders at each round. If a rider gets hurt the team has to find someone else for the next round or not turn up at all.

Next year the promoter is already talking about expanding the series into France, Italy and Spain, which is pretty mad. I’d definitely do it again if I was given the opportunity. 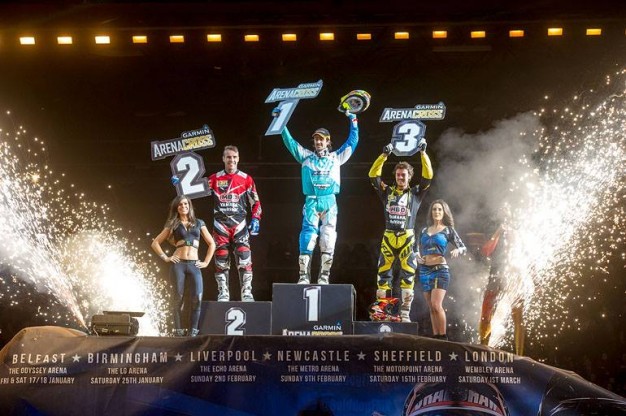 What was the coolest experience you had over there?

The weather was pretty cool – it was always about five degrees and raining! It actually made it difficult as I couldn’t practice at all during the week, I just had to turn up to the venue and race each weekend.

But the coolest experience was probably a trip to Warwick Castle, which is a huge medieval castle in England. We went down in the dungeons where they used to torture prisoners and that sort of thing. Seeing and experiencing different cultures like that is always awesome.

We also went to Lanzarote Island, which is off the coast of Spain and is basically covered in volcanic lava from five volcanoes. There were some sick beaches there.

Sounds like good times. Well you’re back in Australia now getting ready for the MX Nationals. How’s everything working out with TM Racing Australia?

It’s going really good. We found a good base for testing just before I left for the UK and are now finalising everything and making minor adjustments. We’re still lacking sponsors but have got the normal stuff covered with gear, chains and tyres. We just need some financial support to help with entry fees, fuel, and to make some money as well.

At the moment I’m lacking a bit of bike time, but my off-bike fitness is right up there. Every day in the UK I did two-hour gym workouts, so I’m physically really strong, but I need to go out and hit some more 30-minute motos.

The MX Nationals is a long series, so I’m aiming to get a good result at Broadford, then momentum for the rest of the championship.

Awesome. Thanks for that, mate. Catch up with you in a few weeks time.