Okay, we’re just about halfway in this 2014 Monster Energy Supercross series and with it comes a look back at where we’ve been and where we’re going.

There are many thoughts about the series itself and I thought that because I have a column on MotoOnline.com.au and you don’t, sharing my opinions with you would be fun. Yay!

Here are some statements by myself that I believe are going to come true when this thing is all said and done. Please don’t go back at the end of the series and see what I was actually right and wrong about because my ego can’t handle that. 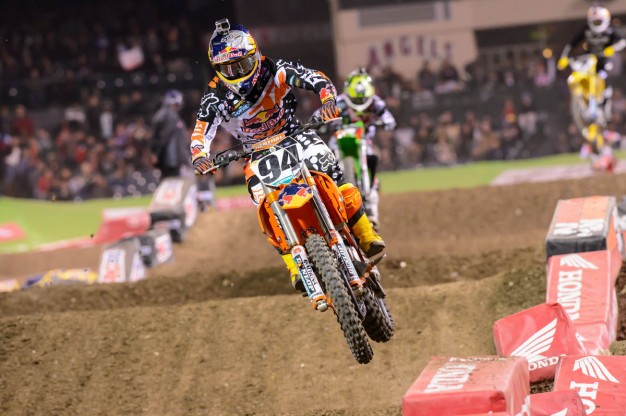 Fact: One of Ryan Villopoto, Kenny Roczen and James Stewart will win the 2014 Monster Energy Supercross series
I know I’m not going out on a limb with this prediction but hey, former SX champion Ryan Dungey is only four points behind Stewart. I just think that seeing as how we’re eight rounds deep and Dungey doesn’t have a win yet while the other three have two, I’m writing him off from this thing.

Heck even Stewart’s got an uphill climb being down 26 points (it’s 25 points for a race win by the way) but he’s shown that he’s got the speed. Villopoto’s managing this thing fine but have you noticed it’s been a month since his last win? Roczen’s nine points back and as a complete rookie in the class has been the most impressive out of anyone this year. His bad races really aren’t really hurting him too much and that’s a sign of a contender. I still like RV to bring this thing home but he’s got to get going real soon.

Fact: Justin Barcia has had a terrible season so far
But you say wait, he’s got a podium and until he missed this past weekend’s race after his practice crash he was seventh in the series points. Not so bad Matthes! Well, in a word, no. Barcia was expected to do much better than he’s been doing but he can’t get a start when he needs it and when he has gotten it, he’s crashed his way to the back.

Lots of pressure on the 51 to make something happen this year, his contract is up and he’s supposed to be the next one. After all, last year in his rookie year he got two wins. This year, he’s far off that. Want a prediction I think you can lock in? Barcia won’t be on a Honda next year.

Fact: Dean Wilson won’t be able to top his injured boss in podiums
The decision by Mitch Payton to let Dean Wilson fill-in for Chad Reed over at Team TwoTwo starting this weekend in Indianapolis is a curious one but one I’m thankful he did. Wilson wants to go to a 450 badly and show what he can do and let’s face it, his 250SX west series couldn’t have gone any worse. But I think Wilson will struggle to back up Reed’s finishes and I don’t even mean the wins.

Wilson definitely won’t get any wins but I think it’s not going to go as well as many in camp Wilson thinks it will. I like Dean, I think he’s a great rider but it’s tough to jump in headfirst into the 450SX class like he’s doing. I have him in the sixth to 12th range battling with guys like Broc Tickle, Andrew Short and Josh Grant. Nothing wrong with that but tough for me to see him do any better than that. Fact: Andrew Short and Nick Wey are having great seasons, but you never noticed
Both veterans of the series now, Short’s 30 years old and Wey’s 33, but they’ve been having some good seasons. Short’s one of only four riders (Villopoto, Roczen and Brayton) to place inside the top 10 at each race this season. That’s tough to do. Also Short had a turbulent season last season as his team folded and he was picked up by the BTOSports KTM guys.

It took him a while to get used to the only steel-framed bike out there as well as the Pirelli tires but he’s up to speed this year. Taking more chances than usual, being in good shape and knowing how to race supercross puts Short into the top 10 in points. Yeah there are riders that are more talented (Josh Grant), on better bikes (Jake Weimer) or have more hype (Eli Tomac) than Shorty but he’s showing that he’s got a lot left in the tank.

Wey suffered a bad injury in the 2012 outdoor season that left him out of the 2013 supercross season. Never being as good of an outdoor guy as indoor guy, Wey hit the nationals last season in a comeback of sense and wasn’t very good. It took the number 27 a long time to get back going last summer and even when he did, he was far off the pace. But never giving up and working hard are two things that Wey’s good at and although he missed the main the first week he’s been in every one since and sits 17th in the points.

To put this in perspective I was offered a bet by an industry person before the season that would Wey make six mains? This person figured that would be a tough call to make. Well, he’s made seven out of eight already and doing pretty well in my opinion. It’s been a long road back for the self-financed rider and he should be proud of where he is now.