New Zealand MX1 Champion reflects on his second round sweep.

Kiwi charger Cody Cooper has wasted no time in establishing himself as the firm favourite to retain the MX1 crown at the New Zealand Motocross Championship.

At the second round of the championship at Tokoroa on Sunday, Coops stormed to three wins from three starts and extended his points lead to 21 points over Billy Mackenzie and Ford Dale.

MotoOnline.com.au caught up with Cooper during some mid-week testing to find out how it all unfolded. Good, solid win on Sunday again. How did you rate the weekend?

To be honest it was pretty dangerous. Usually Tokoroa gets some sweet ruts and and acceleration bumps, but the track was strange. Hardly any ruts formed and there heaps of square edges hidden by the dust and dirt.

After the first race I thought I needed to take it easy and rode at about 90 percent for the rest of the day to be safe. I managed to pull leads and then hold the gap, but by the end I wasn’t even jumping some of the jumps.

Ben [Townley] helped a lot with setting the bike up and finding the right lines, but it was a strange day. I think the rest of the riders kind of played it pretty easy too, but it was a positive to know I could’ve pushed harder if the other boys had stepped up their pace.

This was the first time the New Zealand nationals had visited Tokoroa in ages. Had the track changed much since you last raced there?

Yeah I’ve practiced there a bit, but the track and the way it changed during the day was totally different to what I normally find there.

As far as the layout goes, there were a few different sections and a couple of two-lane options, and the laps were really long. During the races we were doing about two minutes 15 seconds a lap.

Personally I think they could’ve made it shorter so there wasn’t as much area to water.

You’ve won all but one race so far this year. Are you happy with your form at the moment?

I’m definitely happy with where I’m at currently, but there’s still room to improve with speed and other bits and pieces. We’ve worked hard on my starts this year and it’s great to have them consistent now.

On Sunday I got two out of three holeshots and I should’ve had the third as well, but I braked too early into the first corner and lost it.

But yeah, I’m stoked with how everything is working out with the new bike and team this year. I’m in a good place and now it’s a matter of carrying that form into the Aussie nationals. 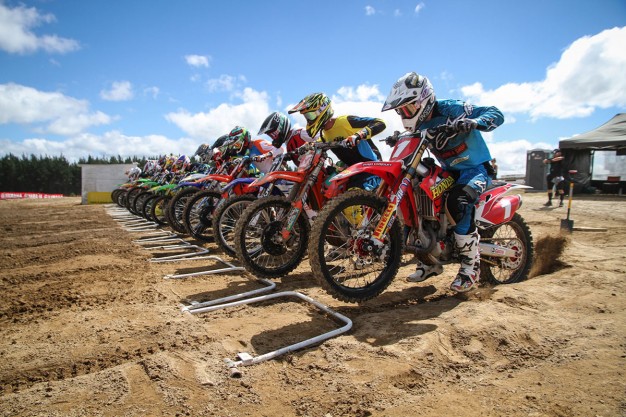 Yeah, tell us a bit about that. Last year you had a similar form streak during the NZ MX Nationals but couldn’t carry that across to Australia. What have you done to address that this year?

I guess I’m just surrounding myself with good people who motivate me and who want to help me out, I’ve got a great bike and I’m feeling confident.

Last year I thought I started the Australian championship with plenty of motivation, but I lost it around the middle and I couldn’t pull myself out of the hole.

It all went downhill from there. This year I need to make it happen and I’m really looking forward to it.

You’ve now had three good hit-outs against Billy, Ford and Kirk Gibbs. What do you think of their pace so far?

The boys are always tough to beat and they’re always fast. Ford’s won a championship, Billy got third last year and Gibbsy will be up there for sure, especially as the season wears on.

I think as long as my starts remain good and consistent I definitely have a good chance of winning the MX Nationals title this year.

Awesome, thanks for that bro. See you over here in a few weeks.