It’s been a tough season for Honda Muscle Milk’s Justin Barcia. Picked by many to be a multi-race winner this season and a real threat for the title, it just hasn’t happened for the guy they call ‘Bam-Bam’.

Barcia started off the year looking great but it’s been some mistakes, some crashes and a lot of bad starts for the number51. But things may be turning around for him, now heading to the east coast where he’s happier and this past weekend in Dallas he got his first podium of the year.

But as usual with Bam-Bam, there was some controversy in the form of a whip thrown into Kenny Roczen’s grill after a pass. I caught up with Justin after the race to get his take on things and as you can read below, he’s a frustrated guy. 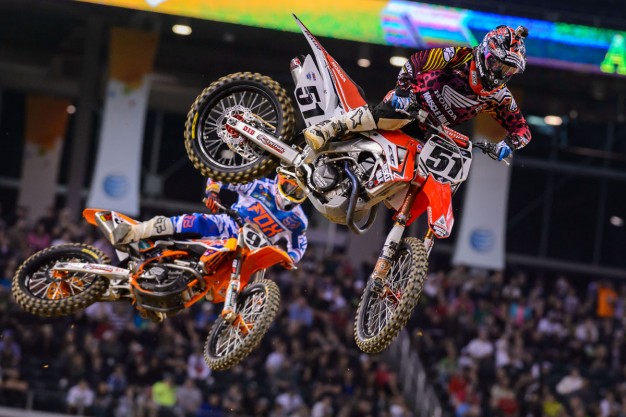 I imagine a guy like you, this is a relief more than excitement. Like you’re relieved that ‘hey, I’m on the right track’.

It’s exciting but the relief is way bigger than the excitement just because I’ve known I can be in this position and be running up front but things have gotten in the way and it’s unfortunate, but definitely something to take the steps in the right direction, so that feels good.

As much as you can, what’s been going on? I know I talked to Jeff Stanton a little bit and you had a good week with Jeremy McGrath working on starts and he really thought that was going to be…

I thought that was going to help me a lot, but for me this is the strongest I’ve ever been, the best shape I’ve ever been in. I feel like I’m the best rider I’ve ever been. Before the season I got my bike really good and I felt comfortable on it at home.

You know how you feel at home, it’s like this is going really good. You’re not riding with really anyone. Got to the race and it was a struggle. I feel like a few of the guys had their stuff dialed a little better for starts and stuff and my bike was a little off on the starts.

Yeah, very good starter on 250s and since I got on the 450 they just haven’t been the greatest. One here, one there, but it’s too inconsistent. So we’ve been working on it, trying to get it better. We’re definitely taking steps in the right direction and trying to make it better.

We’re all working on it and it’s not like they’re giving up and definitely for me I’m not giving up because I want to be up there winning races. So everyone’s working hard.

Crazy night for you in the sense you’re third, you’re sixth or fifth and then you’re back to third. It’s a ‘nutso’ race a little bit.

It was a crazy race. The competition’s so fast. Everyone’s so close. I was in third and then [Justin] Brayton got around me, passed Brayton. Roczen kind of passed me, I passed him back. And the track was one-lined and it was really slick. I liked the track a lot, don’t get me wrong, but it was a tough track to race on.

I don’t know if you heard but Roczen wasn’t pumped on you throwing it at him.

But like I told everyone I didn’t know he was next to me and I scrubbed that triple the same exact way every lap. I heard he cried about it, and what’s new, whatever I do with him he cries about it. This is racing. It is what it is.

But on my side, I scrubbed like that every lap. So it looks way worse because I looked over, but the only reason I looked over was because I heard him rev, and I didn’t know he was there. So all in all, sorry his feelings are hurt, but it’s racing.

I think you’ll be better at Atlanta, your area, Daytona, a good track for you. East coast, right?

You are two-time 250 East Coast champion!