Braidwood’s Lawson Bopping has been living the privateer life in the US for the past eight weeks, contesting the opening rounds of the Monster Energy Supercross Championship.

MotoOnline.com.au caught up with the 24-year-old to find out how he’s found it, and what’s on the cards for the rest of 2014.

Hey mate! How’s the US treating you and want have you been up to over there?

I flew over to the US in mid-December with my buddy Joel, bought a bike, van, parts, suspension to have a go at the first six rounds of the AMA Supercross. We’re renting a house in Riverside that’s only five minutes from Milestone, so it’s a pretty perfect setup.

Then just after Christmas when I’d set myself up I tore the labrum in my shoulder while practicing for Anaheim 1. That screwed me up and I missed the opening round, but I went to Phoenix and chicken-winged it around there. I got one good start and let a lap, which was cool, but I still had no strength in my shoulder and I faded, then hit a tuff-block and came off. 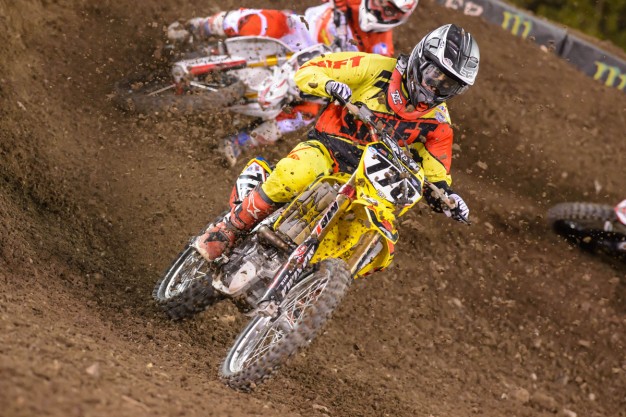 Man, it seems every time you’re on TV it’s footage of you hitting the deck. Are you just getting caught in shitty situations or what?

[Laughs] yeah I’ve been getting my fair share of TV time. It’s not always good, but I’ll take it! I’ve been getting bumped around a bit, for sure. The shoulder injury before A1 meant I was pretty rusty. It’s getting better now, though. I rode without it taped up for the first time at Anaheim 3, but I still had a dodgy weekend.

I had a clutch problem in first practice and missed most of it, then in my heat I got an average start and finished 12th. In the semi my old mate Matt Moss swapped out after the first turn and ran into the side of me, and I went down.

My ‘bars were twisted and the bike was bent, so I pulled out to fix that. Then in the LCQ I came over a jump and hit a tuff block and smashed my chest on the bars. I couldn’t get back up and running fast enough, so that was my weekend done.

That’s pretty much how it’s been for me every race so far. I haven’t managed to qualify for a Main yet, but I’m hoping to turn that around this weekend at San Diego.

So was that your aim coming into these opening rounds? To qualify for mains?

Yeah I would’ve been happy to make the Mains, but man, everyone is so fast here. Their bikes are all decked out, and TV doesn’t do justice to just how gnarly the tracks are. The jumps and whoops are twice as steep and tall than what they look on screen.

For the support I’ve had, carrying the shoulder injury and a knee injury from when Chris Blose hit me at Anaheim 2 and for how stock and slow my bike is compared to everyone else, I think I’ve done okay. 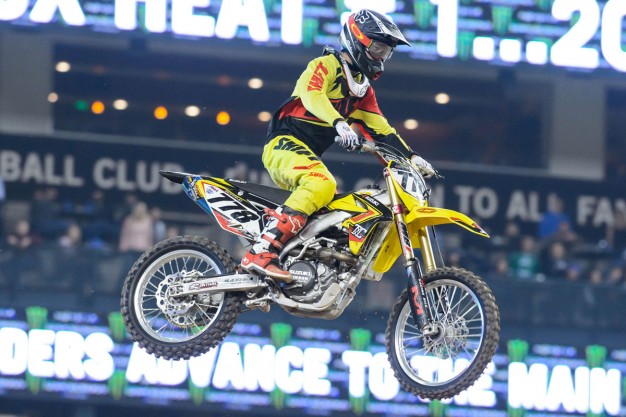 Have you received any help from anyone or has it all been off your own back?

I’ve received a little bit of support from Renthal, FMF and Maxima, and DCR Cams from Temecula gave me a good deal on cams and bought me some VP Racing Fuel. Tee N Cee Graphics looked after my graphics for me and the Dunlop guys are always good at the track too, but yeah, for the most part, I’ve paid for everything off my own back.

I’d love to stay here, but I’ve spent $30,000 of my own money already, and travelling to the East Coast as a privateer to race the rest of the championship is too hard and expensive. I don’t want to go home, but I’m running out of money and don’t really have too many options. I’ll fly back next week after the San Diego round.

Have you got anything on the cards for the MX Nationals?

Nothing. I don’t know what I’ll be doing yet or if I’ll even be at the races. I had a little bit of interest, but it was nothing that I really wanted to jump at. Let’s just say I’m open for offers!

And for me to be a privateer, well, I’d rather be a privateer here in the US than in Australia. It’d coat a similar amount, but at least you can ride good tracks and be in the heart of the scene. It’s almost as if you’re seeing racing for the first time again, as everything is so different from what we have back home.

Well I’m sure something will crop up, mate. It’d be criminal to not have you at the races. All the best for this weekend and we’ll catch up with you soon.