Australian talks about his first five supercross appearances in the US.

Supercross so far, we’re five rounds deep. There’s been some good from you, some probably that you wish you had back, but it’s a learning curve. What do you think of your season so far?

The hardest part has been my health. I’ve been pretty much sick for a whole month, so that’s been a real bummer. Sometimes I’ve been feeling okay at the race but during the week most of time it’s been hard. I want to get home and work on the things I need to. Like today I’m just lying in bed because I’ve got no energy. That’s been the hardest part of the season.

But as for the racing, I’m not going as fast as I’d like, maybe for that reason, I’m not sure. I’ve been basically just spacing out and riding by myself it’s not what I want to do but at the same time I’m stuck between a rock and a hard place.

I’ve never been average at anything in my life. It’s kind of hard to swallow and I’m not here for just three or four seasons or whatever, I do expect myself to do better. I’m kind of bummed out when I don’t do that well. You had a pretty late signing because of your deals that you had going on in Europe. Is that a part of what you are coming up with, just not enough time on supercross tracks?

No, I’m not bummed about that. I’m stoked on the ride. Obviously more time’s always going to make it better. The team gave me the option to do East Coast, but I figured let’s just go ahead and do the West Coast, it’s more convenient for me. If I had more time I might have tested a few more things but we’re testing still through the week when I can.

As far as your sickness, blood tests and all that, obviously you’re trying hard to figure out what is going on here?

Yeah, today I’ve got a scheduled appointment with the doctor. He’ll probably get a blood test and find out what’s wrong. I’m not someone who gets sick – I’m really healthy and I eat awesome. It’s definitely not from over-training because when I first felt sick it was after my rest week. I felt sick and then it feels like I got well. Then I did a couple days out on the bike and a couple days at the gym and then I was sick again.

Having said all that and being sick and learning the testing curve and everything, is it fun, is it cool that here you are in America racing supercross again? Nothing against the GPs, but this is probably where you always wanted to be. Are you taking a time or some moments to soak this in?

It’s pretty cool racing every weekend and stuff. I’m never star-struck by anyone really. But it’s cool and I’m stoked to be here. I watched my first Anaheim 1 and 2 five years ago and then I wished I was on the gate and here I am doing it. I’m holding my own and making it in the mains or whatever.

It’s cool that I’m here and even cooler that I’ve walked straight into a factory rig, which is definitely a big advantage. Every other continent I’ve had to do it really hard to make it to a team where I could do well on. So I’m hoping I can do great things and I’ve got the support I need.

What’s been the biggest surprise for you in supercross so far? The intensity, the quality of riders, the testing on your bike, the whoops…

The whoops are probably a lot bigger than I imagined. And I think it’s just the tight tracks. I haven’t done too much supercross and getting in and out of those turns fast is a challenge for me. I’m obviously pretty established at motocross where you have to go so fast through the turn and bumps and ruts to hold you up and stuff.

All these turns are so hard-packed and slick and getting in and out of them is probably a bigger challenge to me. Especially those top guys, they go so fast. And I’ve just got to learn how to get on top of that.

At the Motocross des Nations, you had a deal to stay with Steve Dixon and his GP team, but now you’re here. Can you take us through the timeline of signing with Steve and then Roger De Coster coming to you and all what sort of happened as much as you can?

I expressed some interest to you at Motocross des Nations that I wanted to come to America one day. I had been in touch with Roger here and there. I’d been a little bit, maybe naive, but I just didn’t know how deep I was locked in with what I wanted to do when I signed that letter with Yamaha. Long story short, it wasn’t like that.

I ended up talking it out with Steve. I had the option to pay it out and I paid to get out. KTM had actually pulled back a bit because they didn’t want to rustle any feathers with Yamaha, which is fair enough.

It’s a small little industry you know? I talked to Steve and worked it out and I paid them back and it gave me options. I paid them back, this is what I want to do. And KTM jumped back in and said if everything’s clean then okay. And I got on the deal with KTM. 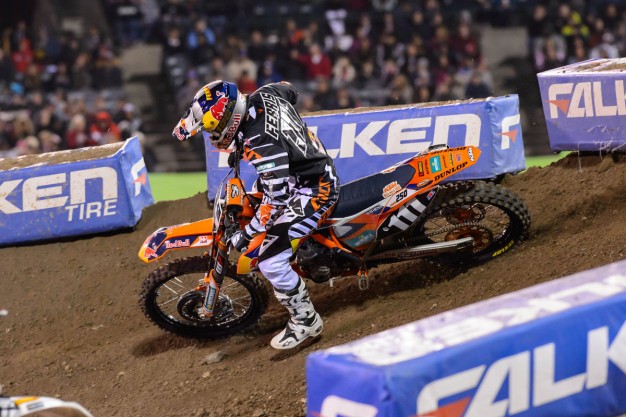 You’re going to be a really good outdoor guy this summer. We’ve had a lot of guys from Europe, not so much Australia, but guys from Europe come over, and they get hurt at supercross and they never get a shot at outdoors. Did Roger tell you, hey, kid, remember to stay healthy? Is that in your mind at all?

It’s in my mind. I remind myself every race I go to, and that’s what Roger told me in our first meeting, to get through supercross. That was his first words he said to me, the very first sentence he said, and I said okay. That’s what I’m doing. I want to do better indoors no doubt about it, but I want to stay safe so that I can shine outdoors.

In the back of your mind you’re like, I can go balls out and pass this guy for eighth or…

Yeah, exactly. I’m watching [Dean] Wilson, Kenny [Roczen] and Chad [Reed] and stuff go though the whoops and they’re just wide open. I’m like, that’s what I got to do, but then I’m like, well, you know what, I’ll probably just take what I can get right now.

Who is the next Australian that us American fans should keep an eye open for? Is there somebody down under that you think’s got the potential to come over and do something?

I honestly haven’t been in Australia for years. I haven’t really paid close attention. But I do on the internet and on the films I see, I’m not sure there’s a special talent out there right now. Maybe there is in juniors that I haven’t seen. I don’t follow junior racing or amateurs as you call it here.

It kind of seems to go every 10 years there’s a bit of talent then there’s like a low for 10 years. There are a couple other good riders from Europe, that’s where the little bit of talent is. As far as I can see back in Australia, I haven’t seen anything real special come out.

What kind of advice would you give fellow countryman Todd Waters about the GPs and being over there?

There’s a lot that I learned from the two years over there. It’s just probably making a little network of people that you trust and you get close to them with and stick with them. That’s what I did in Europe. I found a guy that I trained with and really trusted. He was my best mate when I was there. I hung out with him every day and it kept it real.

Especially Toddy, he’s a family guy so he’s always got that family.You need fun, someone you can hang out with. The guy’s got ability on the bike. I don’t have to tell anyone that. He just needs to make it fun while he’s over there.