The first of three KTM Enduro-X Nationals has been run and won, which saw CDR Yamaha’s new signing Chris Hollis take out the round at Brisbane’s Archerfield Speedway last Saturday. MotoOnline.com.au sat down with the 29-year-old to get his thoughts on round one. Well done Chris, you have come out on top in the first of three Enduro-X Nationals. Can you sum up your day for the MotoOnline.com.au readers?

Thanks very much. It didn’t start off as the best day, but it all comes down to these mains. I wasn’t the fastest guy, I got third in the shootout, but consistency is what it’s all about. I didn’t get the best starts, I was never first. Luckily I got in front of Daniel Milner in that final moto and we won.

It’s so good to come out with a win back on a Yamaha, it’s a really good feeling! Craig Dack has put a lot of hard work into me and I can’t thank him and the whole of the CDR Yamaha crew enough.

They have been flying me down to Victoria to do all the testing in the off-season. They’re a really good team and they have got the bike set up just the way I like it and here we are now on the top step.

As I said, big thanks to CDR Yamaha and all of our sponsors, Fox, Vortex Ignitions, GYTR, Dunlop tyres, Yamalube, NGK and everyone else who supports us.

Something you did mention was about all the testing you have done over the off-season. How much testing have you done and what does it mean personally to come out and strike first blood in the first major event for 2014?

Doing all the off-season testing over Christmas and January was a massive head start. We had a few problems with the bike, a few dramas with the bottom-end, we fixed that, and kept testing suspension and tyres to try and find a happy medium to where we want the bike to handle everything okay.

You are never going to get the bike to handle 110 percent in an Enduro-X meeting because there are rocks, logs, water and all that type of stuff. So we came into this weekend feeling pretty confident, we knew that the new 2014 Yamaha YZ250F was good enough – it was just up to Daniel and myself to do the rest of the work.

What did you think of the track today?

The track was really good. It wasn’t full Enduro-X spec, they had a bit of trouble with a few mods and stuff, but that was really hard to race. They had heaps of rock sections, heaps of log sections. The layout, considering the time the guys had to put the track together, they did an awesome job.

The dirt was really hard and slippery, so it made it hard to pass. But luckily for me a lot of people crashed in the finals and I was just in there, riding around and brought it home. But the track was really good. 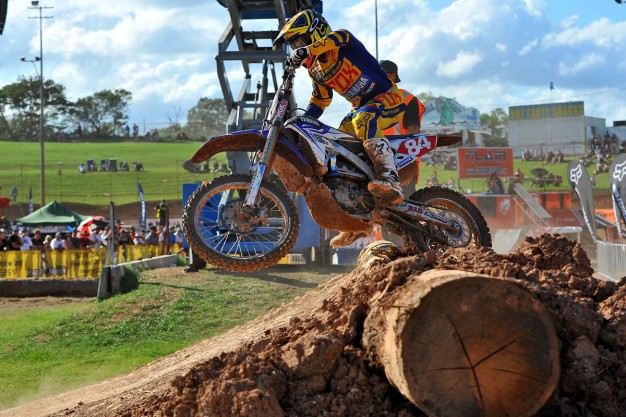 Fast forward a couple of weeks, next round we head to Sydney Speedway… Can you do it again?

I really hope so, but it’s Enduro-X, anything can happen. I can have a bad day, which could result in me back to third or even worse. It’s one of those things were you could get mixed up in pile ups. A lot of it is luck, but things are looking good so far.

The race intensity is there for me. I might not be the fastest but the intensity of the race with three back-to-back main motos, so I’m happy with that.

There pretty awesome to be honest. I have not rode a 250 for a few years now, probably about five years. They’re fast, they just handle so well and today out on the track they performed so well. I can’t fault a thing on the new 250F.

One final question. Your old teammate Toby Price, who has returned to racing from almost a year off due to injury in 2013, finished third. What were your thoughts on his comeback?

Toby did really good today. It’s his first race back after a pretty major injury and he had a lot of time off the bike, so he was really impressive. He won the shootout, so he still has the pace. He will be there every single weekend, in and out for sure.

He is a tough dude and big congratulations to him on getting third. After the injury he had, he has done a stellar performance today.