If you took a glance at the overall results from the Woodville Grand Prix in New Zealand over the weekend, it looks like defending New Zealand Motocross Champion Cody Cooper hosed the Australian-based riders Kirk Gibbs, Ford Dale and Billy Mackenzie.

But the results don’t tell the full story. 25-year-old Sunny Coaster Ford Dale was early on the fastest rider in the MX1 field, with a 1-1-2-DNF result. That DNF cost him dearly and made him slide to fifth overall, but his pre-season pace has come as a warning shot across the bow of the rest of the competition.

MotoOnline.com.au caught up with Ford as he flew back home late last night to find out what went down. 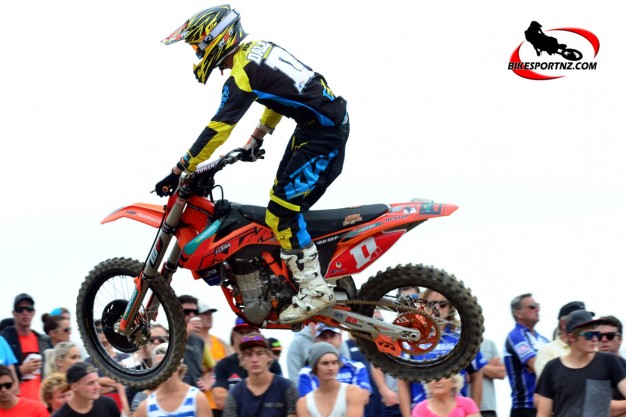 Ford, welcome home, mate. This was your first trip to Woodville and your first hit out on the KTM, what are your thoughts on the weekend?

I really enjoyed Woodville. It had a great atmosphere and racing in New Zealand is just different, everyone is more chilled and it feels more relaxed over there. It all worked out well for my first race meeting with KTM and we came away with a lot of positives from the event.

We did a bit of team bonding and it’s encouraging to see everyone getting along really well. Being a new team for me we’ve started building the team relationships early, so when we get to the MX Nationals we know how everyone thinks and operates and there aren’t any surprises.

You went 1-1 in your first two motos, but it seemed like you dropped off the pace a bit from there on. Take us through it all.

Yeah, I felt good all day. I qualified first by just over a second, and I had a lot of confidence in the bike and how hard I could push it. I haven’t raced since Murray Bridge last year, so it’s been about 10 months for me. I went to Woodville with the aim of getting some good starts and seeing where I’m at compared to the other boys.

In the first moto I got the holeshot and had Cody Cooper on my butt, but I built a bit of lead. Towards the end of the race I got a bit tired and Coop got back onto me again, but I managed to pull another small gap before the end of the race.

The second race was a sprint race. I was second into the first turn behind my teammate Gibbsy, but I got around him and put the hammer down with Coop behind me the whole time. I didn’t feel like I rode over my head or anything, but I still won that race.

I holeshot the third moto and had Coop on my butt again for half the race. I got bad arm-pump and let him past and concentrated on watching his lines and staying consistent for the rest of the moto. I finished that one in second place. So what happened in the final race? That DNF really hurt your overall points.

Yeah it did! It was weird because my hands cramped up on the ‘bars after the first lap, my throttle hand was locked wide open and I couldn’t feel the clutch lever with my left hand. That’s never happened to me before, but it was too dangerous to continue, so I called it quits.

The aim of the weekend was to find out where I was at and what I needed to work on. In that respect it was a successful weekend and there was no point in risking injury for a one-off race, especially as it was my first one back in so long. I was still gutted that it happened, especially as I felt good apart from the cramped hands.

Last year you were a real force early in the season before you were injured. How are you feeling now compared to this time last year?

A lot better. This time last year I wasn’t on the bike yet, so I feel like I have a lot more preparation time this year. In 2013 I didn’t ride until February, so I was under the pump and felt like I was playing catch-up the whole time, which led to more mistakes.

I don’t feel like I’m near 100 percent yet, but I’m happy with my performance considering I only got back on the bike six weeks ago after my ACL reconstruction. It was a long time off the bike and it gave me a lot of time to think about my goals for this year, what I want to achieve and what I need to work on.

Finally, you had your first child last month. How’s fatherhood treating you?

It’s so awesome. Hurley was born on December 6, so it was a busy time with me getting back on the bike the next week. It sucks having to go away to race, but you’ve gotta do what you’ve gotta do. I think the coolest thing is there’s no room for selfishness any more. You’re living for someone else other than yourself and that’s a big responsibility. I love it.

Awesome. Thanks for the chat, bro.