Australian champion Matt Moss had the goal of seeing where he stands in the fast-paced world of Monster Energy Supercross in 2014, scheduled to do the opening West Coast rounds in the premier 450SX class with support from Yoshimura Suzuki.

While he’s pitted alongside factory rider James Stewart, Moss is far from a full factory rider in the US, but has been doing more than enough to make some of the sport’s top names stand up and take notice.

Following a 13th and Anaheim 1 and 11th at Phoenix after holeshotting the main event, MotoOnline.com.au called Moss at his Californian base this week to speak about his experience so far. 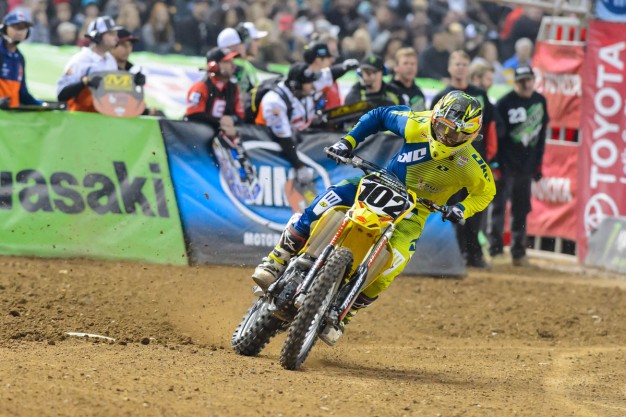 Nice ride last weekend mate, some really positive progress at Phoenix and plenty of TV time. Were you happy with the result?

I was, and obviously very happy with my starts. The main thing was that I took too long to do a rhythm section, the triple-triple-triple, which ended up in me qualifying 21st – way from where I should be. Come the main I just had to do it, and then being up front I rode a bit tight, but all in all from lap three to six it was really good and I was keeping there.

I just held my breath, but the best thing is when I got off the bike at the end of 20 laps, it wasn’t like ‘how did I lose so much? How did I drop off?’ or whatever. I knew the reasons and I knew that my bike wasn’t quite handling the best – I rode tight and I had arm-pump.

I know what I need to do for the next round, but to get holeshots, get some TV time and turn a few more eyes towards me was good. This week I’m getting some more help leading into A2 and it should be really good.

Your starts were a big improvement over A1. Was that something you specifically worked on, or just that your nerves were lower?

I worked on it a little bit, but at the first round I don’t think I was lining up looking to get the holeshot. I had [Justin] Barcia next to me [laughs], looking across to someone like him was a little bit surreal, so I just wasn’t concentrating on the start.

Going into Phoenix I knew to give myself a chance of a better position, I needed starts. I’d already raced these guys once, had to pull my finger out a little bit and worry about myself. I’ve always been good at starts, so as long as my head’s in it then we’ll be sweet.

I know you basically headed over there with a setting similar to your Australian bike, but it’s a little bit different over there and requires a different set-up. How’s the progress on that front?

Yeah, well the progress had been nothing up until this week. I bought last year’s factory suspension from Showa, which is a little hard at the moment, but we’ll do some testing and get it better. Hopefully we can go into A2 with a little more stability with the bike.

People don’t realise, you can make a mistake in Australia and still hold the lead. Make one here without the best stuff and you go from first to fifth in one lap. It’s just the way it is, so you need to be on the best equipment and I want to give myself the best shot. 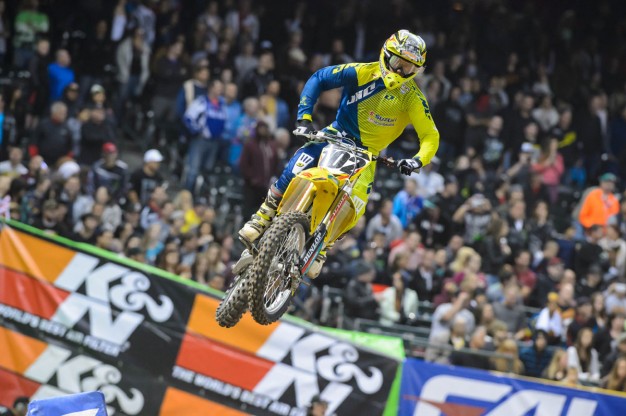 You’ve been riding at the Suzuki test track and on race weekends your speed has been quite strong overall, so is that something you’re able to gauge against James Stewart during the week?

Definitely. This past week going into Phoenix I wasn’t much off James doing a 20. I dropped my lap times a second and a half compared to the week before, it all just makes a big difference – tyre choice to a click here or there on the suspension.

In Australia it’s just make do with what you’ve got, do your best, but you can’t get away with that here. You have to think about the bike a lot more, try make it better, and I feel like we’ve done that.

Gauging yourself compared to the guy who’s arguably the fastest on a motorbike and to be within the same second as him builds the confidence. It definitely helps going into the next round.

And what’s the plan from here? How many rounds are you scheduled for?

The plan is to do six. I’m not sure, but Jay Foreman’s over here and he will ask the guys. I’m not racing the New Zealand titles anymore so we can stay and do the whole six – Jay said he’s pretty sure it won’t be a problem and I don’t think it will be with Suzuki.

Yeah, it is for sure. When I get home I think it will be five weeks until the gates drop at the first MX Nationals round, so I’ll probably have a week off and then get back in the swing of things. We’ll be hunting towards another championship in Australia.