What a race at Anaheim, Kenny Roczen took the prize with some great riding and some mistakes made by some of his fastest competition like James Stewart and Ryan Villopoto. One thing’s for sure, this opens up the 2014 season just the way we like it – lots of drama going on. We caught up to Chad Reed after his nice third place ride. Thanks. I don’t know what to say – I don’t really agree with you that it was a great ride. For me I’ve been around a long time and I had a lot of good opportunities tonight and I was way more prepared than that.

I just think that I was so excited and after such a tough year, I rode like a rookie and just let it kind of get to me a little bit, rode tight. Just couldn’t find my rhythm. So a little disappointed by that, but super satisfied for the podium. Obviously stoked on that. So we’ll kind of learn and try to chip away and do something a little better next week.

Dungey caught you at one point. You pulled back out. He got you in the end, so I thought that was a pretty good regroup. Your starts seemed good. I think your fitness seemed okay.

Yeah, like I said, I’m better than that. There were some really good opportunities and wasn’t able to capitalise on it. I think just tough year last year and the excitement and the preparation and the expectation that I put on myself kind of was a little too much maybe.

I don’t know where anyone behind me was on the starts, whether anybody really came through the field, but from what I’ve seen everybody was pretty much the same and there was no real separation.

You had a really good first lap, I think you were about fifth, and you got into third really fast.

I had a solid first lap, and that’s kind of why I was disappointed, I kind of was going and then I found a little bit of the rhythm and then it just kind of… I had a lap or two there where I was a little off.

And then I just kind of fought trying to get back on that, regrouped in the middle there and pulled it back out and was kind of holding my own with Stew and Dungey. I kept messing up the gator back, one of my favorite obstacles and I completely sucked at it, so a little disappointed about that.

But what do I say? I expected to be here, I’m here, and a lot of people say I can’t be. 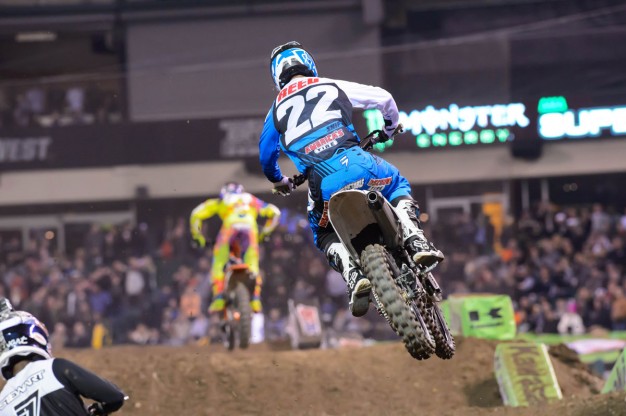 I’m no riding expert, you’re certainly better at this than I am, but I thought your sand turn wasn’t the greatest either. Going too high.

My sand turn was good when kind of like, I would get in there and stay in the bottom, it was solid. But like you said, I started getting in there, I was playing protective and kind of covering the inside and that kind of left me no option but to push up on the outside there, and that was terrible.

That’s where Stew got me. So live and learn. Bike was solid, I think we changed the clickers maybe once or twice and that was about it. For me it was a solid, solid night. I can’t say anything but just I’ve been here before.

I talked to the Kawi guys a little bit, they said you barely changed anything on the bike. You’re really happy and they’re pumped to have you. It’s been a great partnership, I guess we’re only one week in, but they’re pretty stoked.

And likewise. We’re real happy. During the off-season obviously they’re doing their own thing, we’re doing our own thing. You’ve got two race teams that are striving to be contenders week in and week out, so a lot of pressure on each team. I think they’re helping us more than maybe what people think.

For me, my biggest thing is there’s no over-promising – I feel like they’ve lived up to their end of the bargain. And for me and us as a race team we just want to build that. Obviously the last time I was here it didn’t end well or go well and we’d like to change that.

There’s some really solid people there, I love Yoko over there and a few of the guys there. We’d like to let this thing grow and try to not be only one Kawi on the podium. Hopefully we can get both of us up there.