The 2014 American Supercross season-opener again lived up to its hype.

There are four things certain in life: birth, death, taxes and that the first race of any national motocross or supercross championship will be crazier than your Aunt Betty off her meds.

The weekend’s season-opener of the 2014 Monster Energy Supercross at Anaheim certainly held true to form, and we’ve collated the top 10 talking points from one wild night in the west. 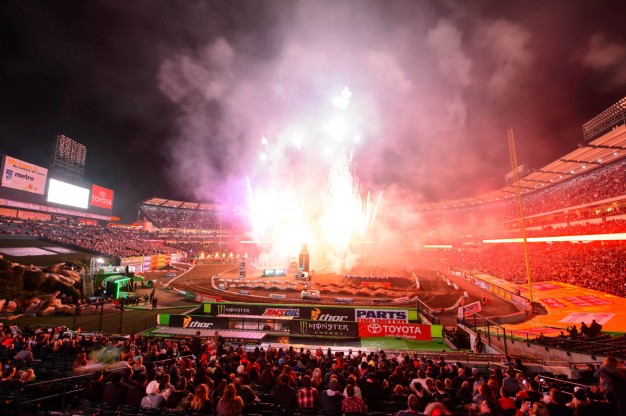 Stewart’s epic bail
Without a shadow of a doubt, James Stewart’s huge dirt nap in the whoops while challenging Red Bull KTM’s Ken Roczen for the win was the most shared, tweeted, liked and talked-about moment of the night. Midway through a slick set of whoops Stewart’s bike turned into a mechanical bull that bucked him off before nearly taking out a bunch of trackside photographers. With the ‘bars looking more like something you’d find on a Harley, there was no way he could continue and was forced to DNF.

Tears of joy…
Okay, so Mike Alessi has his fair share of haters, but the amount of traction his emotional breakdown received after winning his heat race was surprising to say the least. It was the first time he’d ever won a supercross heat race and it all got too much for the MotoConcepts rider, who broke down during his post-race interview. For someone who started his interview with “I can’t even talk right now”, he sure carried on a bit.

Solid Roc
Ken Roczen must have a smile as big as Julia Roberts at the moment. In his first year in the Opens he’s already stamped his authority all over the class with a gutsy main event win. Sure he got a little lucky with both Villopoto and Stewart crashing, but he showed a tonne of maturity in the way he held his nerve when everyone else pin-balled around the show. Afterwards he announced he’d had his arm in a cast just a couple weeks beforehand after a practice crash leading up to the series. Gutsy.

And here comes Reed!
While viewers have gotten used to commentator Ralph Sheheen blurting this phrase an average of 32 times every broadcast, it actually carried some weight on Saturday night. After a disastrous 2013, Chad Reed has emerged from the off-season looking fresher, faster, more determined and more relaxed than we saw him at any stage last year. After his son Tate was included in the opening ceremonies, a podium position aboard his new KX450F will have certainly seen rounds of high-fives inside the Discount Tire Racing semi afterward. Australia’s GOAT is still a long way from being done with racing!

Alessi’s starts
Talk about going from hero to zero. Mike Alessi’s holeshot in his heat race was one of the best you’ll ever see. He timed the gate so perfectly, he was already a bike-length in front when the pack was a bike-length out of the gate. While tongues were still wagging about that, Alessi over-anticipated the gate-jump in the Main and got stuck behind the steel while everyone else rode off into the sunset. To his credit, he recovered brilliantly to finish 12th. Déjà vu all over again
Ryan Villopoto must hate Anaheim 1. Last year he had his worst result of the year and was forced to play catch-up all season. 2014 started off in a similar fashion when he crashed while comfortably leading the main event from eventual winner Ken Roczen. RV remounted in fourth and obviously decided to cut his losses and rode a safe, steady race to the checkers. No-one ever won a championship on the first night.

Middleweight bouts
While the spotlight shone heavily on the uber-stacked 450 class, the 250 boys did their best to draw attention back to the West Coast series. Jason Anderson’s brazen last-lap pass on Cole Seeley for the win whipped the crowd and commentators into a frothing frenzy, and an epic battle between GEICO Honda’s Zach Osbourne and Monster Energy Pro Circuit Kawasaki’s Dean Wilson had everyone perched on the edge of their seats. The quarter-litres are going to put on just as good a show as the 450s this year.

Additional Aussies
Anaheim signaled a new chapter for new Red Bull KTM recruit Dean Ferris. For a guy who hasn’t raced supercross in years, ‘Ferriswheel’ rode damn well – he made the West Coast 250SX main event and was fifth out of the first turn, but gradually slid backwards to finish in 14th position. Meanwhile, Matt Moss set the Twittersphere alight with his blazing pace in practice and qualifying. He finished 13th in the main after hurting his wrist, but is already looking forward to Phoenix this weekend.

Reformat
For the first time in years the AMA Supercross received some race reformatting, and even though the changes were minimal the anti-change traditionalists were ready with pitchforks and nooses if there were any hiccups. There weren’t. Essentially the changes saw the start gate expand from 20 to 22 riders and the usual two qualifying heats and an LCQ change to two shorter heats (where four riders transferred), two semis (where five riders transferred) and an LCQ (where the remaining four riders progressed). It meant more races, shorter, more intense motos and more excitement. What’s not to like?

Tomac’s troubles
Surely GEICO Honda racer Eli Tomac’s full time debut in the 450SX class was one of the shortest on record. After qualifying ninth, Tomac tangled with Weston Peick and Jake Weimer just two corners into his heat race and he was forced out of the rest of the night’s proceedings with muscle spasms in his shoulder. He’ll be ready in time for Phoenix and eager to make up some of the points ground he lost.