A reflection with a different angle of the year that was.

2013 was nothing, if not eventful. It seemed barely a couple weeks would go by without something catching us off-guard, or shocking and surprising us. With that in mind, MotoOnline.com.au has dug back into the annals of 2013 and compiled our list of the year’s biggest shocks, surprises and upsets (in no particular order). 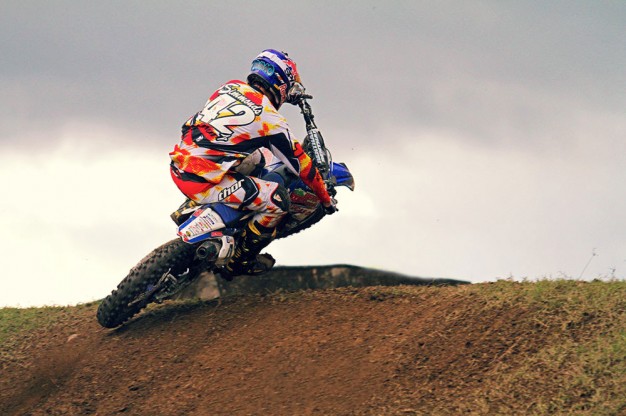 Tye Simmonds retires
On 22 July, Berry Sweet/Lucas Oil/Yamaha’s Tye Simmonds made an out-of-the-blue announcement that was retiring from racing. The then 21-year-old broke the news to his team manager Craig Anderson at the Appin round of the MX Nationals, quoting that he’d simply fallen out of love with the sport. However, all might not be lost – Tye hinted soon afterward that he’s not ruling out a return in the future. But for now he’s happy to go piggin’ in his home town of Bourke.

Australia’s ISDE effort
After years of being there or thereabouts, Australia came agonisingly close to closing out a podium result at the 2013 International Six Days Enduro at Sardinia, Italy. Spearheaded by Yamaha’s Daniel Milner, who won the E2 victory and finished second outright, the Aussies were sitting pretty for a podium until the halfway mark, when they slipped to fourth and managed to hold that position. Meanwhile, the Australian Women’s Trophy Team barrelled to their first-ever ISDE victory, almost 15 minutes ahead of second-placed Sweden. Australia has well and truly arrived on the World Enduro stage.

Tyrone Gilks passes away
Gold Coast-based FMX rider Tyrone Gilks was on a rapid rise to the top and it seemed nothing could stop him, climaxing with the world’s first dirt-to-dirt 360 at the 2013 Farm Jam, just a few months after learning the gnarly trick. It seemed everything the outgoing, zany kid touched turned to gold. However, while practising to break the long-distance jump world record on a 250cc two-stroke at Maitland Showgrounds on March 21, Tyrone came up short and suffered severe head and chest injuries. The 19-year-old passed away later that evening, sending shockwaves around the motorcycling and action sports communities. Rest in peace, buddy.

KTM buys and rejuvenates Husqvarna
Well, who saw that coming 12 months ago, eh? KTM’s purchase of Husqvarna this year raised more than a fair share of eyebrows, but it’s turning out to be a brilliant move. KTM now has a big fleet of competitive machines, more factory race teams – including the one our boy Todd Waters will race for in Europe next year – and established Husky as a viable option at a time when it seemed to have been losing its sheen a little. We’re excited to see just how competitive the Huskies are next year.

Team Zero Seven Motorsports folds
Seeing any team close shop is tough, but no-one anticipated that one of the slickest-looking operations in the motocross pits, Team Zero Seven Motorsports, would be sidelined for the final three rounds of the MX Nationals, leaving riders Cody Mackie and Kade Mosig without a ride and their mechanics without a job. The closure was due to team owner Mark Haughton’s company RPM Transport Group going into administration, and there is no word as to whether they will return for 2014. Plus, it looks like more are on the way out for next year. Ferris flogs ’em
How good was Dean Ferris’ year? In just his second season on the grand prix circuit, the Dixon Yamaha rider claimed podiums and a memorable 1-1 clean sweep at Bastogne, banged bars with Eli Tomac and Ken Roczen at the MX of Nations, then signed to ride for Red Bull KTM in the USA for 2014. If you’d told Deano at the beginning of the year that that’s how 2013 would pan out, he would’ve laughed and said you were trippin’ balls. Look who’s laughing now.

Kurt Caselli’s death
No-one could believe it when news broke that KTM’s cross-country champion and off-road legend Kurt Caselli had passed away while racing the Baja 1000 on 15 November. At 30 years old, Kurt was a three-time AMA National Hare and Hound Champion and was named AMA Sportsman of the Year in 2007. Due to the nature and location of Kurt’s tragic accident, early rumours ran rampant that he was the victim of a booby-trapped course, but it was later announced he had hit an animal on a sandy, high-speed section of the course. Our thoughts are with Kurt’s family and friends.

Ben Townley calls it quits
2013 was expected to be the year Ben Townley would smoke the entire MX1 field in Australia. But just two weeks before the start of the MX Nationals season, the former MX2 World Champion suddenly announced he was pulling the pin on his professional career. Citing the fact that injuries had taken its toll on both his body and spirit, BT101 closed the door on his dreams of claiming an AMA Motocross Championship. Still, BT has remained a strong figure in the sport – he’s now Cody Cooper’s race team manager and is trying to get his brainchild, Speedcross, off the ground.

Rise of the rookies
As a general rule of thumb, it takes an MXD rider the better part of a year to come to grips with the biff-and-barge of the senior classes, and that’s if they’re at the top of the MXD heap before they enter. If they’re a top five-or-six MXD rider? Well, there’s a good chance they won’t last a year and will have their spirit broken. Tell that to Kale Makeham and Luke Clout, who rattled more MX2 cages than an angry two-year-old at a chook farm this year. Makeham claimed second overall and stood on nine of the 10 podiums, while Clout stormed to his first overall victory at Murray Bridge and podiumed regularly before succumbing to a leg injury midway through the season.

Reedy’s shock slump
TwoTwo Motorsports’ Chad Reed had everyone scratching their heads at his obvious lack of form and pace in the USA this year. A horror supercross series thanks to a knee injury saw him finish an uncharacteristic fifth overall, before he picked up some weird virus infection before the outdoors began. From then on, Reed was a distant mid-packer in danger of getting lapped by a rampant Ryan Villopoto and Ryan Dungey. Reedy never revealed specifically what his problems were, but did say on several occasions it was health related and his fitness was genuinely lacking. Here’s hoping 2014 sees a rejuvenated Reed return to the pace, aggression and style that we know and love him for.