Pulpmx's Steve Matthes checks in direct from the US, presented by Fox Head Australia.

The start of the long grind begins in just a couple of weeks. The supercross season is kicking off the first week of January and it’s a 17-races-in-18-weekends rush to the checkers.

We say this every year, but the depth of the 450SX class is truly amazing in 2014. We have both 250SX champions moving up as well as the 250MX champion moving up. When’s the last time we’ve been able to say that?

I have a pretty cool job being able to go to the races and follow these great athletes and riders. Both the supercross and motocross series over here feature most of the best riders in the world and it’s a privilege to watch these guys do what they do week in and week out. As a former racer myself, I totally understand how hard it is to go as fast as they can go.

Guys like Jimmy Albertson or Weston Peick are so unbelievably fast and skilled that they would blow the doors off your local pro riders and yet they struggle to stay on the lead lap of a Villopoto, Stewart or Dungey. It’s truly amazing. So with that in mind, here’s a list of things that I’m looking forward to this 2014 supercross year…

I’m looking forward to seeing if James Stewart can indeed build off his Monster Cup win and challenge Ryan Villopoto. I was speaking to multi-time supercross winner and former Yamaha and Suzuki factory rider David Vuillemin and he really thinks that Stewart can be the guy to challenge Ryan. We’ll see because in 2013 – now, granted James was dealing with an injury – Stewart was about third or fourth on the list of guys who would worry RV.

Ryan Dungey, Justin Barcia, maybe Trey Canard all gave the Kawi kid a better race than Stewart did. For his part, James said he’s feeling as good as ever (but when did a rider ever say “I’m just not feeling that good going into A1”?) and that he’s as healthy as can be. Stewart was very good at the Cup race, can he break the odds and win another title four years after his last one? 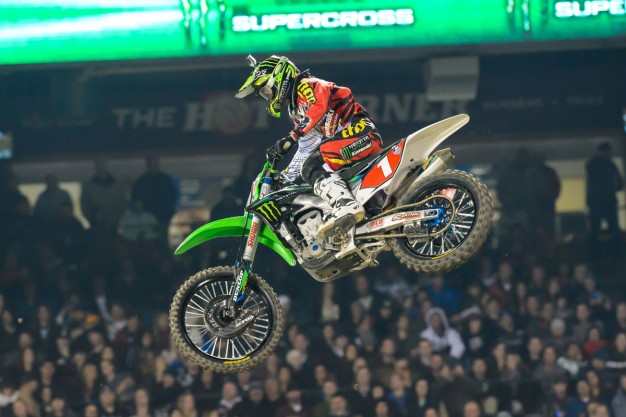 I’m also looking forward to seeing how the 250SX west series breaks down. As usual none of the teams are really talking about which of their riders are doing which coast, which is hugely idiotic and ridiculous.

Why try and do any interviews or talk about a team when us the media and fans don’t know who is racing which coast? Sometimes I just want to slam my face in with a frying pan when covering this sport.

We think GEICO Honda’s Zach Osborne, Star Yamaha’s Jeremy Martin and Rockstar Racing KTM’s Jason Anderson are doing west and we know that new Red Bull KTM rider Dean Ferris is as well because he Tweeted out a shot of his bike being built for supercross.

I’ve asked around on Ferris with his fellow countrymen and people who have seen him ride supercross and the opinions are all over on how he’s going to do. Some think he’ll be great, some aren’t as impressed with his indoor skills as with his outdoor skills.

I know this; he’s on a great team with a great bike so he should be pretty good right off the hop but we thought the same thing about Dan Reardon who came here and just never made it happen. Ferris is a wild card, no doubt about it.

Until further notice, Kawasaki’s Ryan Villopoto is the heavy favorite to win his fourth supercross title this year. If he stays healthy, he wins – it’s that simple. Villopoto is the ultimate rider in terms of being mentally strong. He’s not bothered by any of the hype, any of the talk and sure he’ll give you the same old clichéd answers about working hard and all that but you get him when the recorder is turned off and he’s a very confident guy.

His trainer Aldon Baker has a favorite saying and it’s “keep calm and carry on”, which RV practices to a T. Someone jump something in practice that he didn’t? No worries. Someone beat him in a heat race? Not fazed. What about crashing twice and getting 14th at the season opener? Nope, not going to rattle this guy. He’s got 20 fast laps in him each and every week and it’s that simple. Mental strength is one of Villopoto’s biggest strengths and it should propel him to yet another title.

I’m excited to see if Chad Reed can yet again complete his endless cycle of being written off and coming back. Reed had a so-so season last year (he actually got fifth in the points which truly isn’t that bad, but because of his poor motocross season we forget that in supercross he wasn’t that terrible) but he wasn’t happy. 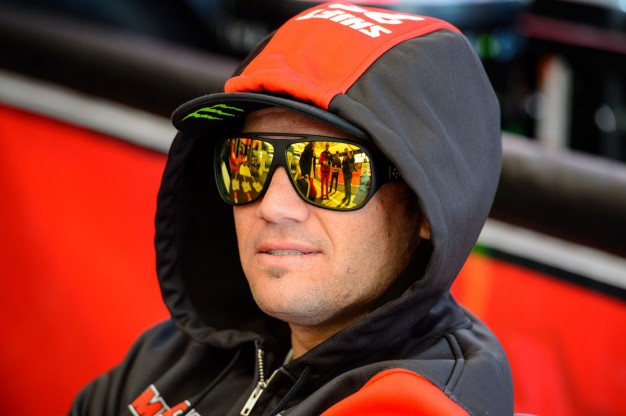 At this point Reed is the vet on the circuit, he’s replaced Kevin Windham (who replaced Timmy Ferry, who replaced Mike Larocco) as the old guy people cheer for and that’s amazing. I can still picture Reed on Team Yamaha with myself in 2003 as a rookie in the class. Where did the time ago?

Anyways, Reed’s back on green with access to whatever Villopoto’s got so he should be happy with his bike. Chad never really fit the all-new 2013 CRF450R and tested Kawasaki, Suzuki, Yamaha and KTM this off-season before settling on green.

Lots of people write Reed off and I don’t blame them. Here’s the thing though, Reed admitted to me (and others) that he wasn’t in the shape he needed to be going into 2013 (which the Honda guys were also whispering to anyone who wanted to listen) and that, combined with the bike issues made him unhappy.

Rare is the athlete in this sport that can look themselves in the mirror and admit their shortcomings. By Reed doing that, he’s one step up on a lot of other guys he’s racing. Can he win the title? I don’t think so, but I think he can rebound and get some podiums and be much more competitive than he was last year. He’s happy with his bike, he loves his team around him and by all accounts, he’s working hard off the bike. Don’t write the old guy off just yet.

The travel involved in the series is tough for the media, never mind the riders but it’s still fun to go to these cities and see the different obstacles each one presents. Some of the best times are hanging out in the pits and talking to the riders and team personal. We’re on all this great big traveling circus show and at the end of the day we’re all in this together.

Some big laughs go on behind the scenes, as well as some serious shaking of the head. This sport can’t even outdraw dog shows on sports networks, but yet some people think it’s NASA. Don’t get me wrong, I get that there’s a lot of money at stake here but again, we’re all in this because we loved riding dirt bikes at some point.

Why take it to a level where we’re actually not having fun at the races? I guess that’s easy for me to say because I don’t care who wins – I just want to see a good race and have fun at my job. Still, those that can laugh a little bit seem to live a bit longer… wise words indeed.

Happy holidays to all the people who read this site and column; Gobert’s really building something here. Now let’s get racing!