Queenslander shaping up for fulltime return in 2014.

After having an absolute nightmare two years with injuries, KTM Lites pilot Brenden Harrison is back and he’s hungrier than ever to make up for lost time.

MotoOnline.com.au caught up with Harry to find out what’s been happening and what next year holds. Brenden, it’s great to see you back racing again. What are your thoughts on your supercross comeback and your fifth place in the Lites championship?

It was good, considering it’d been so long since I’d raced. I was under-prepared going into the first round and battled arm-pump, which was to be expected, but still disappointing. My goal for the season was to progress each round and fight for race wins and podium positions by the end of the series, and I did that.

It didn’t come easy though – I was really crook leading up to the Phillip Island rounds and actually spewed in my helmet while racing during Sunday’s racing. It was pretty gross!

I was happy to end the season on a high note at Toowoomba, where I finished second and managed to catch Luke Styke towards the end of the race.

The Monday after Toowoomba I had an operation to remove a screw out of my knee. They had put the screw in during my 118th femur break [laughs], but its position was right where my knee brace rubbed.

The screw was kinda flicking a nerve and it drilled me through every set of whoops or if I tapped my knee against something.

Man, you’ve had a really rough time with injuries the past two years. How hard has that been for you to push through?

Oh dude, it’s been really tough. I’m 24 now and have basically missed two entire years of my career with massive injuries and big complications. Apart from one race at Horsham last year for the MX Nationals, Darwin was the first time I’d raced since 2011! Most people don’t see that or realise how much it affects you.

Lining up at Darwin was pretty nerve-racking and I was disappointed with how I tightened up, but racing the two-round Queensland Supercross Championship was the best thing I could’ve done. Every time I saw a gate drop I relaxed a bit more and got familiar with it all again.

You’ve just come back from a trip to the US. What did you get up to there?

My girlfriend lives in California now, so I went and hung out with her for two-and-a-half weeks. We went to Mexico for a few days, and while she was at work I just worked on my clothing brand, organised 2014 and worked on my training program.

I also tried to eat as much shit foot as I could, so I could get it out of my system. I was having chocolate croissants and cookies every day, burritos for breakfast, pizzas and icecream for dinner.

It worked, but by the end I was so over crap food and I’ve knuckled down and have been eating healthy since I got back. 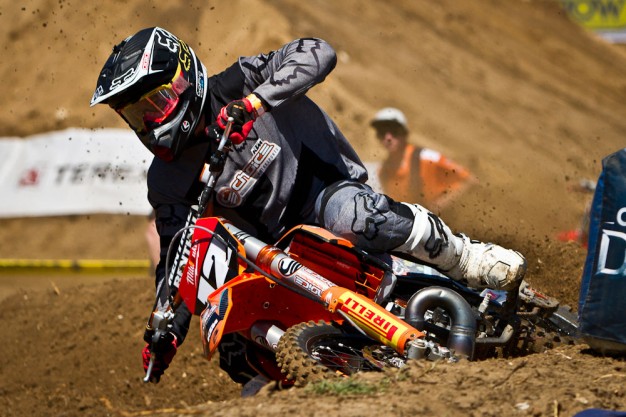 That’s gold [laughs]! You just touched on your clothing brand, Twe12e Clothing. What’s the deal with that?

It’s a bit of a project I’ve got going on at the moment that will hopefully set me up for something in the future once my racing career starts to wind down. It’s impossible for me to do an apprenticeship at the moment and still win races, so I’ve decided to go down the clothing path.

At the moment I don’t want it to be super busy; I’ve been approached by retailers to stock it, but for now I just want to keep it online and grow it slowly. It’s a big learning curve trying to get my head around mark-ups, stock and stuff, but I’m really enjoying it.

Good stuff. So what are your plans for next year? No doubt we’ll see you at the track?

Yeah, definitely. I’m running my own team, Twe12e Clothing KTM, and I’ll race a 250 SX in the MX2 class. I’m just confirming all my sponsors at the moment. Kenny Hamer has helped me out heaps and I’m looking forward to doing my own thing at the races and calling the shots.

It’ll be great racing the two-stroke too – it’s pretty much cheating against the 250 four-strokes, but anyway…

[Laughs] I guess it goes without saying your goals are to win the MX2 championship next year?

Yeah, both in motocross and supercross, then I want to move up to the Open class. I know 100 percent I can win next year. It’ll be my first season in a long time that I’m coming into fully prepared and ready to go.

No-one’s seen me like this before and I’m feeling really confident. I think the biggest competition will come from Josh Cachia, but I get on well with him and it’s going to be awesome to have us both out there battling injury-free. I can’t wait.

We can’t either, bud! All the best for the off-season and we’ll catch up in the new year.