Pulpmx's Steve Matthes checks in direct from the US, presented by Fox Head Australia.

The 2014 season is right around the corner (no really, take a look at the calendar, it really is) and already the pre-season testing, grinding and work are taking a toll on some riders.

Supercross is truly a mans sport and the margin of error is small. We see the riders getting hurt all the time and the ones that stay healthy year after year are truly the heroes.

Just think about the stars of the sport. Chad Reed out for the year in 2012 after a bad crash; James Stewart’s missed more races than almost anyone out there; Ryan Villopoto has missed three 450 series in his career; Trey Canard has had more injuries than you can count and even the venerable Ryan Dungey broke his collarbone in 2012 and missed some races.

It’s insane the amount of injuries we’ve seen in the last five to six years and to me it’s a combination of the bikes being faster and faster, the suspension guys figuring things out and the riders for pushing the limits.

When these guys hit the ground nowadays, they’re going a hell of a lot faster than they were when they were on 250 two-strokes.

So it’s with that knowledge that we look at the three most recent injuries in our sport. All significant blows to the riders and teams and all three guys are going to be out for a while. Rockstar Racing’s Davi Millsaps has had a rough half of a year. After a very impressive 2013 supercross season Millsaps has to miss the outdoors while he underwent a massive knee/leg procedure to fix some ligaments as well as help him walk straight.

It’s the years of prior injuries that caused these problems to arise. After a lengthy recovery, Millsaps got onto his new KTM (the team switched from Suzuki’s) and promptly broke his foot. That wasn’t too bad, but about three weeks after getting back on the bike from that, Davi’s done something to his other ‘good’ knee and will be out a while.

No one knows the extent he’ll be out, but it’s bad enough that the team already hired Ivan Tedesco as a fill-in rider for the number 18. It’s been a rough go for Millsaps lately no doubt about it.

The next rider to go down was GEICO Honda’s Justin Bogle, who threw a scrub down while practicing and dragged his footpeg up the face of the jump. Predictably this led to the bike stopping and Justin continuing to go forward into what observers say was an ugly crash.

And just like that Bogle broke his back and some other things and is hoping to be back for the east coast (he was scheduled to ride west) series but in talking to insiders, that’s going to be a stretch. That’s too bad also, Bogle missed supercross last year while recovering from an injury and was looking to have a big year. 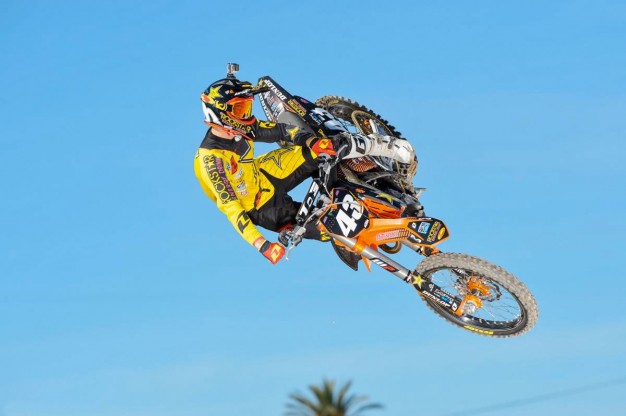 And to complete the injury trifecta, Millsaps’ KTM teammate Joey Savatgy went down hard just this week and at last report had a bruised lung among other injuries. This will certainly knock Savatgy, a young and promising rider, out of supercross on the west and maybe even the east series.

Savatgy has some serious healing time ahead of him and that’s too bad for a kid that just got a new ride on a KTM factory team.

It’s with all this news still rattling around your brain to make you think that maybe JGR Yamaha’s hiring of Phil Nicoletti was the start of a new trend.

You see, Nicoletti’s deal with JGR includes only selected races which at first blush seems odd with Phil’s super strong rides last year on the N-Fab Yamaha team. But what JGR is doing is covering themselves in the event that one of its two main riders hurt themselves.

Perhaps no team in the pits has been through more replacement riders in its time than the JGR squad and right now they employ of the riders who has been hurt more than most in Josh Grant. In fact, this Grant has not made it through an entire 450 season in his career. So the team is keeping Nicoletti on the sidelines in case the inevitable injuries strike.

It’s a different arrangement to be sure but who knows, maybe this is the start of something new in the sport. There are plenty of uncertainties in the sport of supercross but one thing that remains constant is injuries will strike. Millsaps, Bogle and Savtagy know this all too well.