The road to recovery with one of the sport's talented up and comers.

Nineteen-year-old Victorian Jake Emanuelli made a hell of a comeback to racing this year. After sitting out all of 2012 recovering from a broken back, the teenager from Bairnsdale returned to the MXD class to finish seventh at the MX Nationals, then a solid third place in the Under 19 class for the Australian Supercross Championships.

Jake grew up surrounded by bikes. His father owned a motorcycle shop and raced quads, with Jake and his older sister Carley following suit. After claiming four Australian titles, the siblings were given the option to either continue racing quads or jump onto two-wheelers. Both chose two wheels and Jake never looked back.

Still it took a couple of years under the guidance of Greg Moss to become competitive on motocross bikes at a national level, with his best result being a fourth in the 250F class in his final junior year, at Lake Macquarie in 2010.

However, it was when Jake jumped up to the Under 19s in 2011 that he really started to get noticed. A third at Murray Bridge and a second at Coolum saw him finish the season in fourth place and crowned Rookie of the Year.

But then, just when it seemed he was on a fast-track to the top, disaster struck at the Campbelltown round of the 2011 Super X Championship – just an hour after signing a deal to race for GYTR Yamaha for 2012. 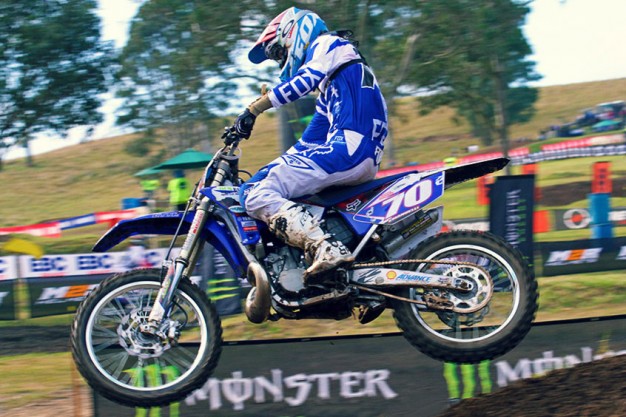 “I came over the finish line jump behind Meghan Rutledge. She was on the racing line and rolled the jump and I didn’t see her until I was in the air and it was too late to do anything,” Jake explains. “I landed on her and went over the bars and broke my back.”

Jake crushed his T4 and T6 vertebrae and was hospital-bound in Sydney for three months while they inserted two rods and 10 screws into his back, effectively fusing his back from his T2 to his T6.

Emanuelli was wheelchair-bound for three to four months and spent an entire year enduring rehab and physio classes.

“It was pretty hard,” he admits. “I definitely had second thoughts about whether I wanted to return to racing, but I guess I wanted to prove I could return to the level I was at again.”

13 months after his crash Jake contacted Yamaha and GYTR Yamaha team boss Scott Bishop and arranged a YZ250 two-stroke to race for 2013.

It was a brutal return, though. A seventh overall at the opening round at Raymond Terrace wasn’t the fairytale he was chasing, then after a couple of top five performances, Jake broke his wrist and was sidelined until round eight at Swan Hill.

He finished the season strong with a two sixth overalls, and gained the attention of Raceline Pirelli Suzuki, who signed him up for the supercross season. It was the first time Jake had ridden for a team and he lapped up the experience. He rewarded the team with multiple second-place finishes to champion Jay Wilson, but a 10th at one of the Phillip Island rounds saw him slip to third overall behind Wilson and Corey James.

“It was awesome riding for Raceline and I really appreciate the opportunity they gave me,” he says. “It’s the best thing that’s happened in my racing career and I was pumped to regularly be up the front of the pack.

“I really enjoyed this year’s series. The tracks were a bit smaller than usual, but I had a lot of fun.”

However, even after a strong supercross season, Jake hasn’t received any offers for next season yet.

“I’m really hoping something comes up for when I step up to MX2 next year,” he said. “If I don’t get a deal I don’t know if I’ll even race – it’s too hard on my parents and I’ll have to juggle a full-time job and my racing career.

“If I get a deal and can race the nationals I know I’ll do well,” he affirms. “I believe I have the speed to place top five by the end of the year, but my main goal will be to stay on the bike and remain consistent all season.”