MotoOnline.com.au tracks down the always-entertaining GYTR Yamaha racer and finds out what makes this 17-year-old Queenslander tick. It’d have to be when Jordan Smith came over from the US at the 2011 Aussie titles at Murray Bridge and I beat him. He was the gun from the States who everyone was talking about it and beating him was a big stepping stone in my career. Jordan rides for GEICO Honda now in the Amateurs.

I’d say this year’s MX Nationals at Swan Hill. I came in with injuries and had a first-turn crash, then felt like I was under pressure all day. It was one of those tough weekends that I just wanted to end.

I definitely want to pick up a good ride in the States. For now I want to win the Under 19s, then move to the Lites, then Opens and pick my way through until I’m at the top. Then I want to head to the US and try and make it over there. I feel like the next couple of years are the gateway to my career.

Gum Valley in Mackay for sure. I grew up racing there and know it like the back of my hand. I think it’s the best track in Australia and everyone who rides there loves it. It’s awesome to have such a good track in my back yard.

Probably a football player! I love rugby league, but I had to give it up for motocross. I’m just a kid who loves getting hurt and hurting people back. I love pain.

Nick Scott. No matter where we’re racing he’s always there and we always find each other on the track. He’s so consistent and is hard to pass. We’re best mates and rivals at the same time; it’s cool having mates on the track who try and take each other out and be fine with it afterward.

My old man for sure. Dad was a rider, a superhero and the toughest man to have ever lived. He passed away on 23 February 2011 from a massive heart attack and even then he was laughing. That was the biggest thing to watch that and I took that memory and ran with it.

While everyone else was down I used it as motivation. I see his face wherever I go and he has turned into a far better rider.

I don’t believe in putting a left boot on before my right one or anything, but I do point up to the sky to my old man and pay my respects behind every start-gate. If I don’t do it I don’t get a good start, so I guess that’s a superstition.

I just ride, run, and do a lot of gym work. I’ve been working a lot to make a living lately – I have to pay for my own food and stuff – so that’s made training hard, but it’s starting to get easier and I’m starting to pump up the training. When I train I have an old-school mentality where I believe you have to ride your bike a lot to get good at it.

Ultimately I want to win the MXD class, but my main aim is to have a strong, consistent year and no injuries. I kind of took the fun out of racing this year, but next year I want to have fun, and remain fit and healthy all year.

I can’t remember which year it was, but the Bar to Bar supercross season when Ricky Carmichael, Chad Reed and Bubba Stewart all raced on two-strokes is still one of the most amazing videos I’ve ever watched.

Footy, swimming and waterskiing with mates. Waterskiing is fun, good for your fitness, and you can’t really get injured from it.

I try to, but I do forget to a fair bit. If I know where I’m at and I’m confident I don’t, but if things are going badly, then yeah, I’ll read it then. 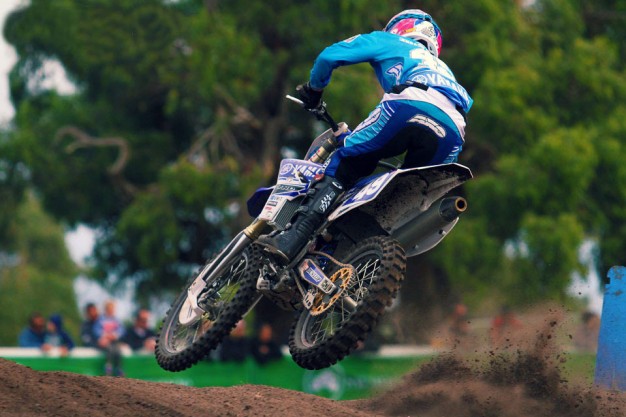 Dirt Action because my boss Scott Bishop writes for them and he’s funny as hell.

I love how it’s all planned out, it’s structured well, it always runs to time and the format is predictable and professional. One thing I love about Kev [Williams] is he doesn’t bend or break any of the rules he makes.

Who will win the 2014 AMA Supercross?

I hoping Bubba does, but I’m going to have a stab at it and say Ryan Dungey.

I always race with my mouth open and my tongue out.

I like mixed formats and seeing who’s the best all-rounder and most consistent rider. It’s more interesting to watch and I hope next year they change the formats up.

I haven’t touched a computer in four or five years! Mac I guess.

Umm… neither? I’ll go KFC because I don’t like Maccas at all.