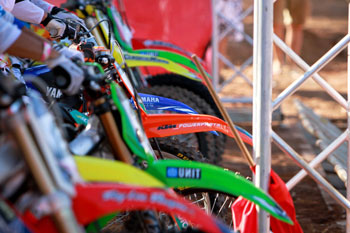 Will we see the second half of ASX 2013 on TV? Image: Grant Reynolds.

Now, further communication has been released by both parties. IEG released to following statement on Thursday, 28 November:

Further to IEG’s response on Friday, 22 November 2013, to the email communication distributed by individuals from AVE Pty Ltd and Terry O’Neill last Thursday, 21 November 2013, IEG wishes to make a further statement in respect of the issues raised by AVE.

For each round of each respective championship, AVE were contracted to produce and broadcast two shows for the local Australian market and one show for the international market. These shows were to be broadcast within seven days of each event.

In IEG’s opinion, AVE have breached the agreement by reason of it consistently failing to produce and broadcast shows within seven days of each event, despite receiving full prior payment for many of those events.

IEG’s lawyers have recently written to AVE alleging the breach of the agreement and that AVE’s email, which was distributed by individuals associated with AVE, was defamatory of IEG.

IEG has demanded that AVE comply with its contractual obligations and produce and air shows over the next few weeks, and to also provide a public apology and retraction of the email. As at the date of this release, no response has been received from AVE.

Should AVE not confirm it will air the required shows, IEG has demanded the footage be returned to enable IEG to produce the shows and get them broadcast. If that is necessary, it is anticipated that IEG will commence legal proceedings against AVE for breach of the agreement and to recover the losses IEG has incurred.

IEG understands the concerns and frustrations of the motorcycling community that the contracted shows have not aired and will take all reasonable steps to ensure that those shows are on air as soon as possible.

Following that announcement, on Friday AVE released its second statement on the situation that has halted television coverage of the 2013 season’s second half:

AVE Pty Ltd denies that is has breached any agreement with IEG as alleged in the media statement. IEG’s media statement has no basis in fact or law, is defamatory, false, misleading and deceptive.

IEG has not provided the commentators and/or other talent as it was required to do so in order to complete the production of the balance of the work to be performed by AVE.

AVE has acted in good faith and performed its obligations under its contracts in anticipation of IEG making payments pursuant to its contractual obligations. IEG has no right to any footage or other AVE material.
The motorcycle community should direct their concerns and frustrations to IEG.