There’s always much to get excited about each and every supercross season. For one, there’s nothing else going on motorcycle racing-wise as the grand prix, the Canadian MX Nationals and Aussie nationals haven’t started. Supercross has the world’s attention all to itself for a few months.

And let’s not forget, supercross is exciting! Supercross is new! Supercross is also dangerous as we’ve found out more than a few times. Very often it’s a survival of the fittest and the title winner is the warrior left standing at the end of 17 rounds.

So many questions with just over a month before the kick off in Anaheim, California and so little answers. Or is there? You’re all in luck because the answer man is in the house. Read it through and you can thank me later.

A. Well, kind of. The sport of supercross is so intense and so gnarly that confidence from a race win in October is hard to carry over to January. It’s really a week-to-week thing and a racing slump is only as long as seven days before you have a chance to change your luck.

Stewart’s entire 2013 supercross season was down the tubes before practice was over at the first round as he hurt his knee and limped through the rest of the season. Stewart certainly looked great as he battled with Ryan Villopoto to take the second main event but he’s James Stewart, he’s a bad man!

The bigger question I have is can he last 20 laps at the pace that he needs to be at? If you talk to his competition they don’t think Stewart can ride at the very highest levels for that long and the MEC being ten laps was perfect for him. 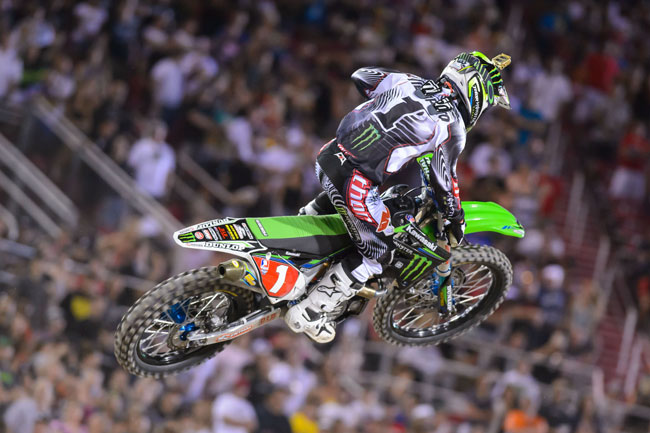 Q. But Matthes, can he beat the three-time champion Villopoto?

A. Fine! You want no waffling and an answer… I say no, he can’t. Supercross is a young man’s game and Stewart’s prime is probably past. Also, no rider in the 40 year history of supercross has ever gone more than one year without winning a title and Stewart’s now on year four without a title.

So no, I don’t think he can but he can win heat races, he can set the fastest time in practices and yes he can win races. But no, he can’t win a title. There I said, are you happy?

Q. What about the other old guy Chad Reed, is he going to find the magic on a Kawasaki?

A. The TwoTwo is off the Honda that he couldn’t get comfy on and back on green once again. But wait, he had his worst year as a pro – until last year that is – on a Kawasaki, why is this going to be any different dummy? Let me finish bro.

The Kawasaki that Reed rode in 2010 is vastly different from the one he’s on now. Plus as Reed said on the Pulpmx Show, he wasn’t in the shape he needed to be in to start 2013 and although he didn’t like the bike, he also admits it wasn’t all him.

There’s so much difference between the bike then and the bike now that I don’t want to get started pointing it all out to you. Reed’s already one step ahead of a lot of motocrossers out there by being able to look in the mirror and point the finger at himself (well okay, he also did indeed point it at Honda a few times but I digress).

Reed will be better in 2014 and you can stamp that. But alas, no he’s not going to win the title next year, but podiums and a return to at least being Chad ‘mother-fu**ing’ Reed? Sure, I can see that. Justin Barcia – More experienced, faster and confident on the eve of next season. Image: Simon Cudby.

A. Well Ryan Villopoto has won three supercross titles in a row so it’s a little, uh, tough to go against RV and say that anyone will beat him straight up. It might take an injury from the champ to make it happen as last year he spotted everyone a huge lead before clicking off win after win and clinching early.

He’s extremely fit, he’s aggressive as all hell and he’s got a great team and bike. I can’t say he’s anything but the heavy favorite going into 2014.

Q. Great, another year of runaways according to you. Thanks for this, jerk.

A. Wait, wait, hold on. Don’t go selling your supercross tickets just yet. Yes, RV’s the favorite but hopefully you’ve been following supercross enough to know that all things change, all things turn and you can’t stay on top forever.

It’s just the way the game is. So with that in mind, who’s got next? Ryan Dungey? Nope. Trey Canard. Maybe, but I don’t think so. Justin Barcia? Bingo! I really think 2014 is the year Barcia starts to ascend to the top.

He’s just got that ‘it’ to me. He hates losing, he’s working hard with Jeff Stanton, he’s going to have a better bike next year (one of the things that was kept pretty quiet all year was that Barcia wasn’t a fan of the new 2014 Honda) after testing and he’s already won a race.

You can’t win the title in your first year without winning a race first, that’s almost been 100 percent foolproof over the years. Barcia’s going to finish second in the points if RV doesn’t miss any races, but if something happens to the Kawi kid, Barcia can win this title. Yeah, I said it. You’ve all been warned.