Kiwi champion speaks about his NZ SX win and switch to Honda for 2014.

With the Australian race season wrapping up, a good number of Aussie riders hooked over to New Zealand to contest the recently reinstated New Zealand Supercross Championship, but it was newly-signed Honda rider Cody Cooper who stole the Pro Open party at the first round at Timaru.

MotoOnline.com.au caught up with the 2013 NZ MX champ to find out what went down, why he shifted to Honda after years on Suzuki, and if we can expect to see him under the factory Honda rig in Australia next year. 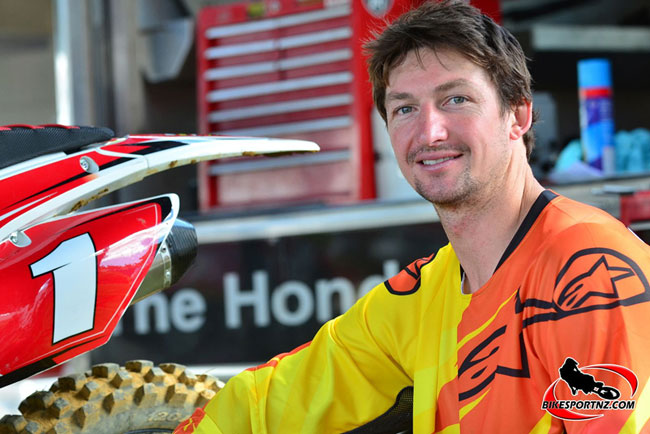 Cody Cooper will be Honda-mounted in 2014. Image: Andy McGechan / BikesportNZ.com.

Coop, good win on the weekend, bro. How did the Honda feel on its first national hit-out?

Yeah it was good as. I was a little bit nervous going into the weekend because everything is so new. Once I got off the start and into the first race I got into the groove, and it all just fell into place, really. The CRF450 is awesome. The engine has heaps of torque and bottom-end, but is still real smooth.

We basically just slapped some supercross suspension in and didn’t do much testing, and it felt great. Over the next couple of weeks we’ll do a lot of motocross testing, because the New Zealand summer races and nationals are our main goal.

So tell us about the NZ Supercross Championship. Not many people even knew it existed.

It used to be quite a decent four-round series a few years ago, but last year it didn’t go ahead because of a lack of entries. Brent Scammell organised a one-off race at the bottom of the South Island that everyone got into, but that was it.

This year they’ve brought the series back with two rounds in the South Island – Timaru on Saturday and Winton on this Thursday. It’s good to see the Aussies coming over to support it and help get the championship going again.

The track at Timaru was good, but there was only one fast line through the rhythm section and it was a hard track to pass on. The laps were about 54 seconds and the whoops were quite tricky – they were steep and pretty close together.

You’ve made a quick switch from Suzuki to Honda since we last saw you at the MX Nationals at Coolum. How did that come about?

I was at a wedding last year and the team owner, Phil Empson, ran the idea of establishing a team past me. I’m also good mates with Ben Townley and Ben mentioned it to me as well. From there it all slowly came together and now we’ve made The Honda Shop Racing Team. Ben is the team manager. I’m pumped on how it’s all turned out and I’m excited about this season too. 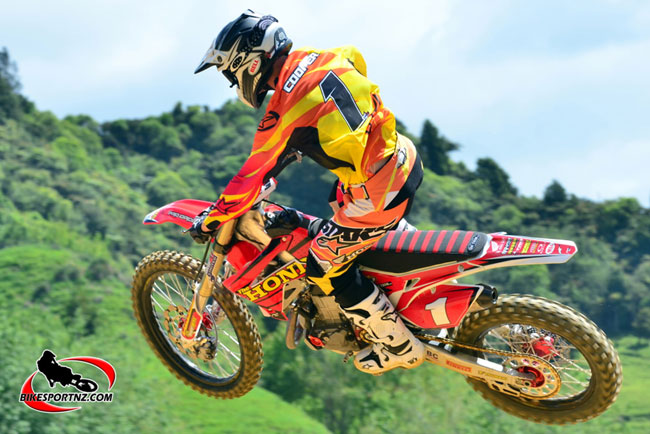 Does this mean we’ll see you race Honda in Australia next year? Is that part of the deal?

I don’t know yet. Nothing has been signed at this point, but it would be good for consistency to race for Honda over there. If I don’t get a deal I’ll come over for the first round at Broadford, because I’ll be straight off the NZ Nationals and will be ready for it.

I’ll focus on the New Zealand stuff for now and whatever happens, happens.

You mentioned before that you’re good mates with BT. Has that relationship changed since he’s now your boss and can order you around?

[Laughs] nah there have been no problems there. If you’re putting in the effort, it’s all smooth and gravy. We’re communicating well, finding things that aren’t working properly and making them work better, which is all part of the testing process.

I know I have an awesome bike for next year and I really have to make it happen. I know I’m on the right track and I’m pumped for the Kiwi summer races.

Sweet as. Thanks for the chat!

No worries. Thank you.