The Yamaha YZ250F absolutely dominated the MX2 field domestically during 2013. Serco Yamaha’s Luke Styke and Luke Clout swept each and every round of the Monster Energy MX Nationals, with Styke eventually taking home the title.

Styke also went on to clinch the Terex Australian Supercross Pro Lites Championship with Jay Wilson doing the same aboard his GYTR Yamaha in the Under 19s class. It was the perfect send off of an old favourite, you could say.

Because, for 2014 Yamaha have released the most advanced YZ250F since they kicked off the 250cc four-stroke revolution back in 2001. The all-new model has been completely rebuilt from the ground up, featuring a list of impressive upgrades and innovative ideas. You may ask, can the 2014 live up to its predecessor’s success? After spending a day on the bike alongside Serco Yamaha’s Luke Clout at Toowoomba’s Echo Valley this week, we both agreed that it should do exactly that – and more.

What do all these new features create? A seriously impressive motor package that offers great power throughout the rev range. The 2014 YZ250F is fast, and when I say fast, I mean really fast. What’s even more impressive is the fact that the motor has a great pull right from the low-end and upwards. Compared to the previous and quite dated engine design, the change is night and day.

Stepping off his Serco Yamaha prepped factory 2013 YZ250F, Clout is a rider with high standards and he was instantly impressed with the all-new motor package for 2014. Although he’s a factory Yamaha rider, his feedback details the minor improvements from a pro’s perspective. 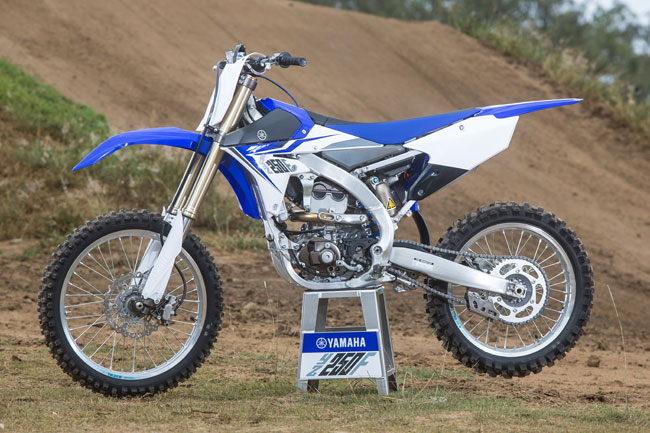 The 2014 YZ250F is new from the ground up – including the addition of fuel injection! Image: Four Oh Four.

“The 2014 YZ250F is definitely the best bike I’ve ever ridden out of the box – it’s an awesome bike,” said Clout. “I’ve spent a few hours on the bike so far and from ground up it’s amazing. I really like how the bike feels and the fuel injected motor is really strong and snappy.”

The 2014 model receives a newly designed aluminium Bilateral Beam frame with roughly the same overall dimensions as the previous 2013 model. The new frame design, paired with all-new styling and ergos, creates a very comfortable cockpit with plenty of room to move.

Much of that roomy feel has been created with the unique positioning of the fuel cap. The fuel cap now sits underneath the front of the seat, which is easily removed for quick refills. This hidden fuel cap design serves two purposes, the opportunity to move your weight even further to the front of the bike and it also allows the fuel tank to sit closer to the centre of the machine.

Yamaha’s main aim for 2014 was mass centralisation, and they have definitely succeeded. Weighing in at 105 kilograms wet (the fuel capacity has been increased to over 7.5 liters), the bike feels very balanced and light out on the track. That balanced and flickable feel is all thanks to Yamaha’s intelligent placement of each and every component on the bike. 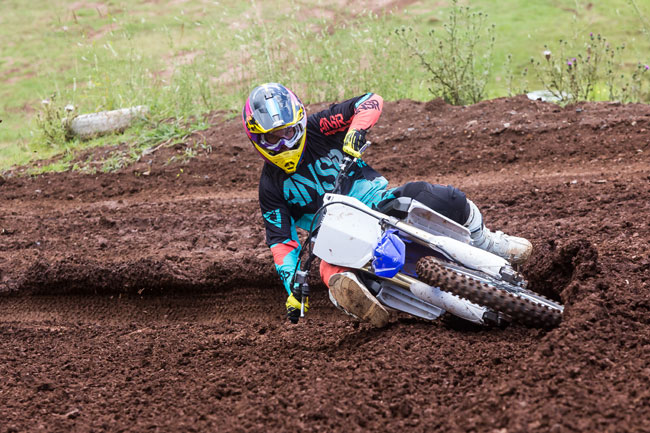 The proven KYB SSS fork has adopted a thicker inner and outer tube with updated spring rates. The rear shock received a new reservoir location and spring rate update to match the new chassis dimensions and front-end design. With the sag set at 105mm I was right at home hitting the array of obstacles Echo Valley has to offer.

The YZ250F felt stable at speeds without a hint of headshake at any point throughout the day. As the track began to slightly chop up, the suspension continued to track through acceleration bumps with ease and continued to deliver a confidence-inspiring feeling.

“The all-new chassis is really cool and it’s really comfortable – a lot slimmer than the 2013 YZ250F,” Clout commented. “The way they’ve centralised the weight has made the bike feel very balanced throughout the turns and very light in the air. You can really flick it around and throw scrubs or whips really easily.”

A new 22mm front axle has been added to the 2014 model matched with a newly designed top triple clamp to increase rigidity throughout the front-end. This update improves handling and front-end feel while the now rubber-mounted handlebar clamps create improved comfort and reduce any added handlebar vibration due to the increased rigidity. The 2014 YZ250F features the same airbox design as the YZ450F. Located up above the fuel tank and seat area, the air filter is hidden away from much of the dirt and debris – a handy feature for those that find changing air filters consistently quite a punishing task.

I can also say that the ‘induction noise’ some riders complained about from the earlier YZ450F models is now almost non-existent on the next generation reverse cylinder design.

Another great feature for 2014 is the addition of in-mold graphics. The sleek new body work now features graphics that will stand up to much more abuse than the previous traditional style stickers.

Overall the all-new 2014 YZ250F has definitely lived up to the hype. The bike has a seriously strong motor package, possibly my favourite 250 four-stroke motor to date with comfortable ergos, great handling characteristics and super-cool styling. 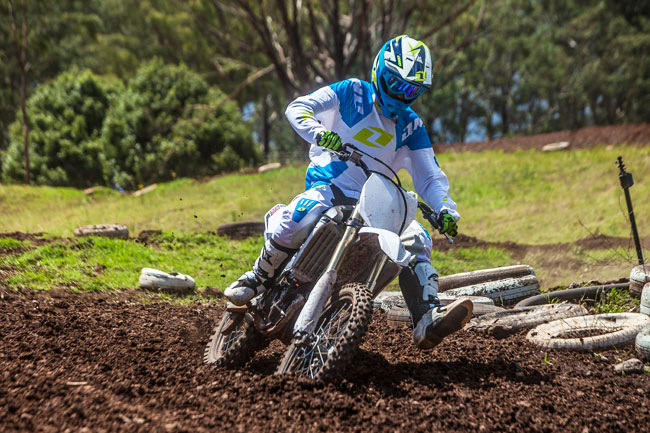 Both the engine power and handling characteristics impressed during the launch in Toowoomba. Image: Four Oh Four.

“The bike is going to be awesome when myself and Serco get to do some testing on it, just doing little changes for me to make me feel comfortable on the bike,” Clout added. “I’m definitely going to try to win these championships next year, and I think the 2014 YZ250F is really going to help me do that.”

Be sure to head to your local Yamaha dealer where the 2014 YZ250F will be on sale for $10,990 (Team Yamaha Blue/White) or $11,099 for the White/Red edition. Stay tuned to MotoOnline.com.au for a film and action-packed photo gallery from the day.