The Honda CRF450R has long been a favourite with riders looking for an open class motocross steed. Great handling, coupled with sleek looks and Honda’s reputation for quality proves a formula for a popular machine.

2013 saw a ground-up revamp of the bike, with an all-new frame design based around lowering the machine’s centre of gravity. Honda claims that the aim with the bike was to produce a total package that would be “eminently flickable, responsive and lightweight”.

Honda focused every element in the CRF450R chassis on attaining a low center of gravity along with class-leading mass centralisation.

This is the bike that just recently went 1-2 at the Paris Bercy Supercross at the hands of Justin Barcia and Trey Canard respectively, and if you want to talk ‘flickable’, watching either of these guys is pretty much the epitome of just that! 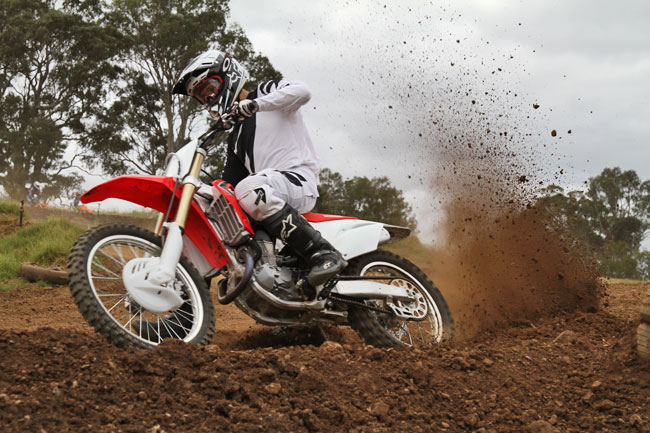 2014 sees these major changes remain, including noticeable features such as the dual-muffler exhaust, which is aimed at tucking in closer to aid in the mass-centralisation process.

The bike also keeps the KYB PSF (Pneumatic Spring Fork) Air Forks that were new for 2013, but with some revised internals aimed at improved damping response. It also retains the sharp new bodywork that debuted on the 2013 model.

One area that has seen some change for 2014 is the engine department. The new model has new new intake and exhaust ports, new dual-timing fuel injection and redesigned muffler internals, all aimed at boosting torque output and increase throttle response.

With all of this in mind, MotoOnline.com.au recently put the new model through its paces. Along with myself for the day was experienced national-level pro Cody Mackie. 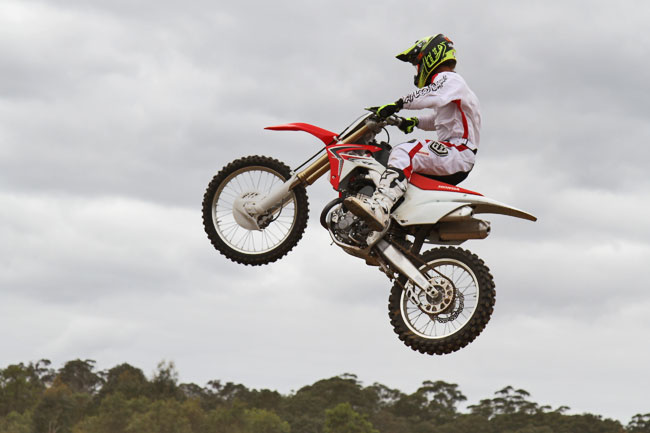 Once out on the track, the first overall impression is that it is a comfortable bike to ride. The ergonomics are super slim, probably more so than any other bike in the class. The seat is quite flat and allows you to easily get forward on the bike, and overall, it is just an easy bike to get to know.

Mackie tended to agree with these intital thoughts. “I have done a lot of laps around Appin in all conditions and I jumped straight on this bike and felt right at home,” he commented.

Moving past the ergos, the other area that attributes to this feeling is the mass centralisation that was mentioned earlier. This bike feels really light to ride, and doesn’t have that heavy feeling that one may associate with the 450s of the past.

When Honda said they wanted to build a bike that is flickable, they have met their mark here. Tipping into turns and riding through switchbacks is a breeze, with very little of that inertia and top-heavy feeling that often makes a 450 a lot less nimble than its younger 250cc counterparts. 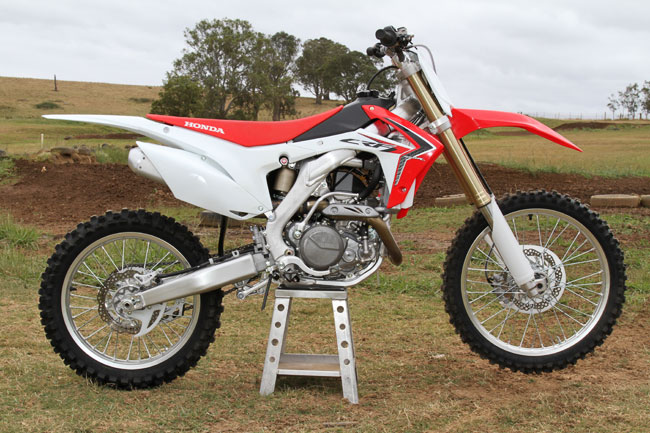 While the CRF450R has been a great bike in recent years, it has never been known as the king of outright power – much like the 250. After riding the bike with the changes listed above, Mackie could definitely see some improvement in this area.

“The biggest thing was the power, I didn’t think it would have that much. I have ridden past models that really felt like a farm bike, but this bike feels really strong,” Mackie stated.

The bike definitely does have a little more of a hit for 2014, however I think Honda have still found a good balance. All of the top modern day 450s have more than enough power for the average rider, and the trick is in making it useable. Honda has nailed it here.

It is a little deceiving, with the relatively quiet exhaust note emitted from the dual mufflers and the smoothness of the power delivery, it still doesn’t feel quite as fast as some of the class leaders in the power department. The 2014 CRF450R has increased power, but remains smooth as silk upon application. Image: Alex Gobert.

That smooth delivery however allows the rider to put that power to the ground very effectively, and it also doesn’t wear you out quite as quickly as others can. Don’t be fooled though as one thing is for sure, when you turn that throttle, it will still get moving very quickly!

As mentioned above, the KYB PSF Air Forks once again feature on the 2014 CRF450R. As before, the advantages to the KYB PSF include significantly lighter weight since it uses air in place of traditional steel springs, and the design also allows incorporation of a larger 32mm cartridge damper piston.

We rode the bike at standard specifications when we first hit the track, and one thing we both noticed as some slight harshness in the front end, especially under braking and the initial part of a turn.

During the test we had GASD (Glenn Allerton Suspension Developments) on hand to assist with the set-up process and work to adjust the bike to our exact likings. A few changes to the bike’s suspension settings immediately made it more comfortable in the turns. Image: Alex Gobert.

After receiving this feedback, Allerton lowered the air pressure in the forks by 1.5 PSI, and that made all of the difference. From there that harshness all but disappeared, while still not blowing through the stroke on any of the bigger hits.

“Once we softened it up and dropped some psi in the front it was good,” Mackie explained. “I have ridden on the air fork for the last 12 months so it wasn’t something new to me, and it felt great.”

In terms of overall handling, the bike was great. Once we made that one adjustment to the forks, they felt far improved. As mentioned earlier, the bike is super nimble, but also tracks straight both under acceleration and braking. Overall it is a great handling package.

For 2014, the Honda CRF450R presents a great option for those in the market for a 450cc motocross ride. They have taken a good 2013 package and made some tweaks to create a very well rounded bike. 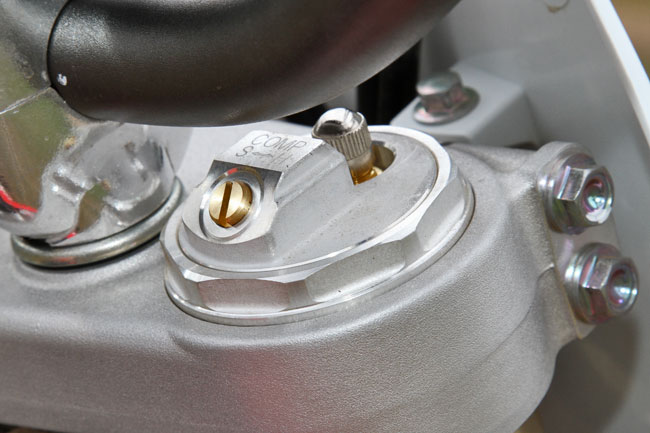 Honda has opted to retain the KYB PSF fork, which both Mackie and Spence were happy with after minor adjustments. Image: Alex Gobert.

The ultra-nimble feel and great handling will be loved by all, and the engine package is ideal for 95 percent of riders. Those riders in the upper echelon looking for a little more hit again will only have to look at an aftermarket exhaust system to satisfy their needs.