There are a million stories about a million things that go on at the annual Bercy Supercross. Add up the lights of Paris, some of the very best American dirt bike racer, some French heroes, a tight track and you’ll find yourself with a lot to talk about.

Everyone should put the Bercy Supercross on their bucket list of things to see before they go six feet under, it’s an incredible race that the promoters work very hard on to make sure the customer is satisfied.

Unlike many races, the top 450 riders are out there in front of the crowd for a Super Pole contest, their normal heat and main races and then a three-race three-lap elimination race that determines gate pick.

The 2013 edition of Bercy featured, in this scribe’s opinion, the best track in years but one of the casualties of adding a Joker Lane (they’re all the rage!) was a short start straight that went into a hairpin left hander which caused gate pick to be crucial.

So it was with that in mind that Sunday’s main event was very exciting indeed when the top two riders over the course of two days, Honda Muscle Milk’s Justin Barcia and Trey Canard, didn’t make the final elimination race due to Barcia losing his front-end and Canard plowing into him.

This left the two riders that hadn’t started outside of gate one or two left with gates four and five-and in Bercy math (gates) four and five equal excitement. Justin Barcia was crowned the King of Bercy for 2013. Image: Nuno Laranjeira.

Trey made a somewhat strange decision that rather than take the fourth gate pick, he went with inside gate second row while Barcia took his gate. And it looked like it backfired early on.

Predictably Andrew Short (gate one) and Gauthier Paulin (gate two) jetted out front in the final main event and the Honda riders were buried. Barcia entered the tunnels in front of Canard and all he had to do was stay there to wrap up his second King of Bercy title but something happened back in those infamous tunnels and Canard came out two spots ahead.

And that was enough for Canard to win the King title. Barcia had two wins going into Sunday but Canard had a couple of second places. So there was help needed for Canard to bring it home and early on in Sunday’s main, he had just that.

But if not for a controversial move by Barcia in Saturday nights main event, Canard wouldn’t have needed the help. Let’s smash-cut back to the previous night. With three laps to go in the main event Canard had really started nailing his corners in the tunnels and had caught Barcia.

So much so that he was able to pull alongside Barcia in the whoops and make the pass in the, hey when in Europe use their terms, the stutter-bumps. By the way, I’ve been to a ton of European supercrosses and it’s never any doubt that due to bike set-up and the fact they practice them so much, it seems that the slowest American is still faster than the fastest European in whoop-de-doos. Just an observation, that’s all.

Okay, back to the action. Barcia was now in second but Barcia being Barcia, he smartly checked up and dove to the inside of his teammate with, predictably, a collision ensuing. It’s something that Justin’s done more than a few times in his career and teammate or no teammate, Barcia just doesn’t like being behind anyone.

It was a hard hit no doubt about it and it was all Barcia needed to win the second nights main and keep his perfect score intact.

“The tension is high in this pit right now,” said Barcia after the main and his move did indeed get a talking to by Honda team manager Dan Betley but if you know Justin, you know that Dan’s talk wasn’t going to matter to the rider they called Bam-Bam.

With this as the backdrop, the next night Canard ripped through the pack in an effort to get to the front and hope for the best in terms of someone, anyone, getting in-between him and Barcia. 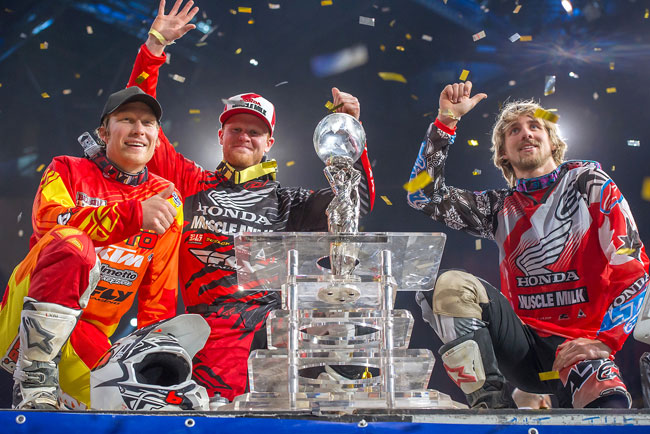 Canard did his job and very efficiently got to the front by passing Short and at one point it perhaps seemed that Short would be able to hold off Barcia but Justin was just too good, too fast for the veteran. Actually on this weekend there wasn’t any rider that could stop the red train of the American riders. Not even close.

With Barcia in second the King of Bercy title was his but in what makes Barcia Barcia, he chased after Canard and gained a bit of time but couldn’t make the pass. But it wasn’t for a lack of trying that’s for sure.

‘The pass’ was the reason Barcia won. The pass was vintage Justin Barcia and it’s why he’s one of the top racers in the world. He doesn’t take no for an answer, he’s got a chip on his shoulder the size of Rhode Island and take it or leave it, he makes no apologies for how he rides.

“I knew I had to make my moves and not let him get away too fast but I put up a fight,” Barcia said. “The tension was up there all weekend. Everyone always sees my passes but he sticks it in here and there. We’ll leave it here and go home like that to hopefully kick ass.”

“If Trey had gone down it would have been a different story and I would have felt bad about that.”

Somehow Barcia had come to terms with his pass on his teammate and convinced himself that because Canard somehow saved it, the pass was okay. Hey, whatever you have to tell yourself as you climb up the ladder of American motocross I suppose.