It’s been a long time between champagne drinks for Campbell Mining Suzuki’s Jake Moss, but the Gold Coast-based 25-year-old broke through for his first win in years at round one of the AMH Queensland Supercross Championship at Robbie Marshall’s farm in Dundas.

MotoOnline.com.au caught up with the always-honest Mossy to get his take on the new series, his national supercross season to date, and what 2014 has in store. 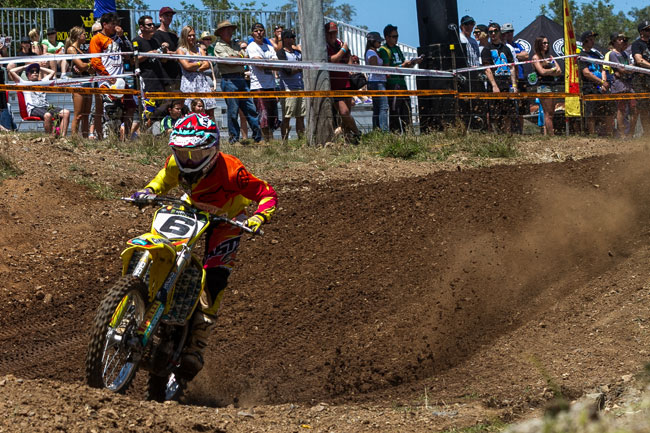 Jake, congrats on the win on the weekend, buddy. How does feel to return to the top of the box?

Yeah, it feels good. I haven’t won an overall in a long time, and although it was only a state race and a lot of the main competition wasn’t there, I think it’s still the best I’ve ridden all season. I put it down to being in a good place in my life where I’m a lot happier now.

Four months ago I broke up with my fiancé and that affected my head a lot and I was thinking about things when I should’ve been focused on racing. It probably sounds a bit selfish, but it’s working for me and that’s a good thing.

What did you think of the inaugural Queensland Supercross race? We’ve only heard good things about it, but what was your take?

Honestly, it was the best supercross I’ve ever been to in Australia. It was really geared towards families, and the fans could stand on the hill or sit in the grandstands and watch the whole track. It was definitely a bigger crowd than I was expecting.

There were no injuries, the organisers were very open to any suggestions of what we wanted changed – if anything – on the track, and everything ran perfectly and to schedule. You know you’ve got a good promoter when that happens. Robbie’s whole family put in 110 percent and I hope Motorcycling Queensland gets behind him next year.

In your mind, how important a role to state championships like this play in developing the sport?

They’re hugely important. There’s not as much money in the sport as there once was, so it’s great to see a promoter pay so well – the purse was $2000 to win the Pro Opens and paid back to $500 for fifth.

That’s great and means guys like Sam Duncanson, who hasn’t raced supercross all year because he couldn’t afford it, can come away with some extra cash. That will keep the privateers involved in the sport for sure.

For Robbie to put up so much prizemoney and to have nowhere near as many rider entries as Australian championships, well, it makes you wonder where the money goes.

You’ve really been in great form in this year’s Australian Supercross Championship. How would you rate your performance to date?

I feel like I’ve been practicing better than I’ve raced! I definitely should’ve won at Mt Gambier, but I hit a lapper and crashed. Phillip Island was a really tough weekend.

I was really sick on Saturday night with food poisoning or something and didn’t ride practice on Sunday. During Sunday’s Main event I had blurry vision, was nearly passing out and, well… I actually crapped myself out there.

I was running to the loo every five minutes before the race and I knew I was going to need to go during the race, but it still sucked when it happened! It was the toughest race of my life, and it was all about going through 20 laps of hell to keep me within striking distance of the championship. 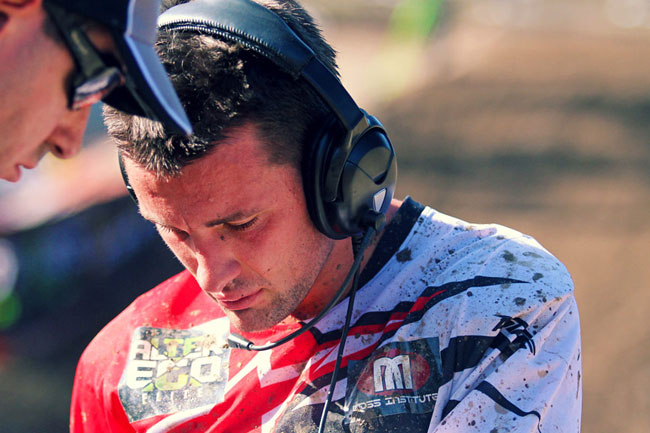 Moss has been a standout throughout the 2013 season for Campbell Mining Suzuki. Image: Simon Makker/Makkreative.com.

Dude, that’s gnarly. They should give you the title just for having the push through that… pardon the pun.

[Laughs] yeah it’s not something I want to ever go through again. But yeah, supercross has been good so far, and Alpinestars and Motorex have come on board alongside Moss Institute as team sponsors. Their support has been awesome.

So, with your solid results this year both in motocross and supercross, are you fielding any team offers for next year?

Yeah, Suzuki talked to me, but their first priority is my brother, Matt. He’s their guy and has the number one plate [outdoors], so that’s fair enough. I’ve been approached by other teams, but, with the exception of one, they’ve approached me the wrong way and tried to get Campbell Mining Services on board instead of me.

At the end of the motocross I was stressing bad and hoped I’d get a ride, as Dave from Campbell Mining said he’d only help me out for a couple of years. He gets next to nothing out of sponsoring me, but he loves the sport and he sees how hard I work with dad and my trainer, Dan Reardon.

As it turns out Dave’s said not to worry and he’ll take care of me again next year if I don’t get a team ride, so that was a big weight off the shoulders. I’m really hoping for a team ride next year, though.

The big thing for me is I want to be the main guy on a team – not a number two rider – and I want Dan to stay with me. He’s helped me out so much and we’ve formed a bond that has been built over a long time. He knows me so well he can tell when I’m having issues at home and asks if I need to talk about anything. Having someone like him in my corner is priceless.

Always good to chat, bro. Good luck for the second Queensland Supercross round at Leyburn this weekend.