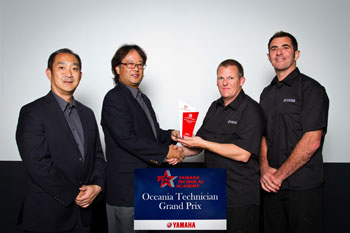 The Tech GP is the culmination of Yamaha’s Training Academy program aimed at raising the proficiency of all Yamaha technicians in the Oceania market region to ensure customers receive outstanding after-sales service.

The event helps raise the profile of technicians within the Yamaha dealer network and provides recognition that will help encourage others to take on a career as a Yamaha technician.

Eight finalists were selected from over 100 applicants working in Yamaha dealerships across Australia and New Zealand.

The finalists arrived at YMA HQ from every region and underwent a computerised theory examination and practical tasks that covered subjects such as fault diagnosis, product knowledge and information systems.

“Everyone at Yamaha sincerely congratulates Jeremy on winning such a close and tough GP,” says YTA training co-ordinator Carl Rollinson.

“Jeremy is an Oceania Technician GP veteran and runner up from 2011. He loves anything on two or four wheels from dirt to road. He has a relentless hunger for anything technical and it shows in his skill level.

“Jeremy is a great ambassador for our industry and keen to pass on his knowledge to the technicians that he works with. These reasons show why Jeremy is the top Yamaha technician in Oceania.”

Read will go on to represent Oceania in the World Technicians Grand Prix in 2014.