Well, that’s a wrap on the off-season races. The GPs are over, AMA nationals are wrapped up, as is the Motocross des Nations. And the Monster Energy Cup is now done. It is now time for everyone to exhale and start gearing up for 2014 and all that it will bring.

Unless of course you’re one of the number of riders that are heading to Bercy, Genoa or Geneva for the big off-season supercrosses in Europe. Or maybe you’re a rider heading to Germany to go do that series. Okay, other than those riders, everyone else can relax.

I saw the press release last week that Red Bull KTM’s Kenny Roczen has pulled out of the Bercy and Genoa Supercrosses that he had previously committed to and I wasn’t surprised in the least. The PR said ‘personal reasons’ but what it really should have said is ‘my new trainer said I couldn’t do it’.

Roczen has teamed up with Aldon Baker for 2014 and a staple of Baker’s program is to stay hunkered into your home base and do not leave for any reason or any amount of money. Baker is just a believer that the work is done in the off-season and travelling to Europe is too much of a strain on the body.

Yes, I know it’s only five days and Roczen was probably getting 50K each for these races but that’s how it is in the world of Aldon Baker. Ken Roczen will team up with Aldon Baker for 2014. Image: Simon Cudby.

There’s no doubt that Roczen is making a big commitment in terms of personal sacrifice and money to Baker and he’s following the advice on what he wants. It’s commendable in one way and shows that the German is serious about his program next year.

We had another one of Baker’s successful clients on the Pulpmx Show a few weeks back and asked Ryan Villopoto (maybe you’ve heard of him?) about racing the off-season races and RV mentioned that it’s just not worth it.

The 50K (or much more for RV) you get from an off-season race can be dwarfed by the millions you can win if you win an AMA supercross or motocross title. You can debate the logistics of five days of travel out of the three months of off-season really affecting you, but that’s what Baker believes in and so that’s that.

Too bad for Roczen’s fans but hey, if he makes a big step up in 2014 in the one area that is perhaps his weakest, you’ll know that following Baker’s lead is one reason.

One of the interesting things at the Monster Cup besides Monster Energy Kawasaki’s sweet new look was Kawi’s use of data acquisition that they had strapped onto the Kawasakis of Ryan Villopoto and Jake Weimer.

Of course we’ve been reporting on the rule changes that have been relaxed to allow the teams to use GPS, which allows them to map out the track and check engine-related things like RPMs and throttle position as well as air/fuel mixtures.

This has been going on for a while now but at the MEC, Kawasaki engineer Theo Lockwood bolted on a rear shock stroke sensor as well as clutch arm sensor. 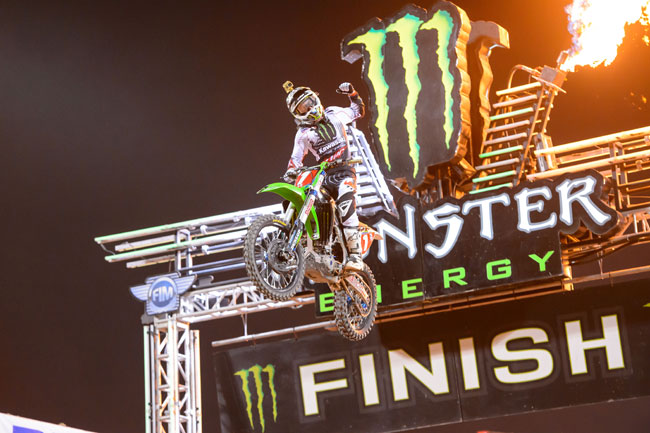 Imagine seeing the data from Ryan Villopoto’s KX450F over the course of a main event? Image: Simon Cudby.

“I come from a road race background, so this stuff is not new to me and it’s my personal goal to get it on the motocross bikes,” Lockwood told me this week. “Motocross is tough because unlike road racing, the surface is always changing, bumps are coming and going and it’s a learning process for all of us.”

Of course a few years ago Team L&M had wheel speed sensors on James Stewart’s bike and there was a huge hubbub about it (it didn’t help that the announcers weren’t educated about what they were) and as of now, those remain illegal along (although with a motocross bike speed sensors couldn’t account for traction or lack of it by the bike) with telemetry which would allow on-the-fly-changes by a specialist on the side of the track.

But in Lockwood’s opinion the telemetry would be pretty dicey because of no rider to pit communication as well as the knowledge of the guy making the adjustments when he wasn’t on the bike. For now, those are the things that aren’t allowed but the collection of data and track mapping is an example of where things are in the sport right now.

“Telemetry would be useful for the TV show,” says Lockwood. “Imagine if you could put on the screen what gear the rider is in, how fast he’s going and compare two riders at once on-screen to help educate the fans.”

So what is the goal of all this stuff besides the, uh, obvious of trying to help their riders win races? “For us, we gather the info with one of the fastest guys out there and no one has any info from anyone like that so this is valuable to collect it and figure out how he can go so fast,” Lockwood continued.

“And then we can help our guys that aren’t as fast as Ryan by showing them what he’s doing and also help Ryan with any weak areas he may have, although I’m not sure he has any!”

When asked if there was any interesting data collected by the team after the race, Lockwood mentioned that the sensors measured Villopoto going between 60 and 65 mph when they were exiting the stadium. Pretty fast! 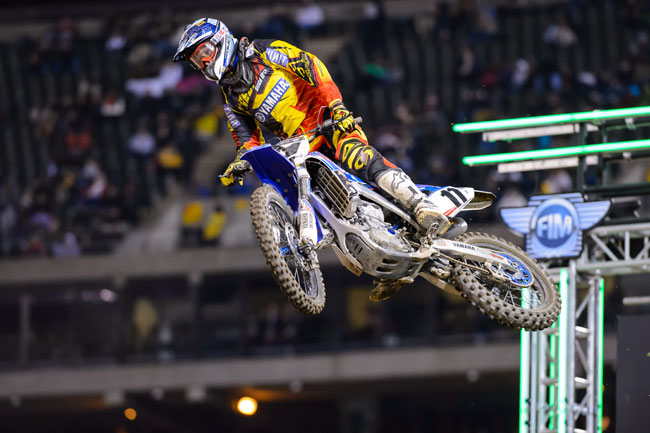 Kyle Chisholm is one of many without a seat for next season yet. Image: Simon Cudby.

Another thing that struck me at the Monster Cup was the fact that during some bench racing with fellow media members it was remarkable how many good riders still didn’t have rides.

Yes, the economy has been better over here and the racing teams have been on a bit more solid ground, but there’s no denying the fact that we’re not out of the woods yet. Remember 2013 saw three teams fold up (JDR KTM, L&MC Racing and Velocity 3 Racing) and this year it appears that there are still some world class riders out there that don’t have anything.

A top 10 250SX rider named PJ Larsen doesn’t have anything and Christian Craig and Lance Vincent just up and quit the sport when they realised that they couldn’t get anything. Our sport in America is a bit lopsided in that the very best riders like Ryan Villopoto and Ryan Dungey make five million dollars a year or more but yet the riders that finish about 10 spots behind them (Chisholm, Nicoletti) are barely getting by.

We’re talking these riders can’t even get a salary of 50K a year to race dirt bikes. I’m not really sure what the answer is to fix this problem but I do know that there isn’t going to be much of a race when you can only get 10 riders on the line.

We’ve got to all take a better look at ourselves as a sport and try to figure out something where we can allow some of these great riders a chance to, you know, make a living at this dangerous sport.