It’s MX Hub time of the week again here on MotoOnline.com.au, the column that enables us to share opinion, reflect on the week that was and basically fill you guys in on the latest topics we have come across over the past week.

Of course the major event last weekend was the third round of Australian Supercross, marking the series’ return to South Australia for the first time since 2008.

You have to give credit to Josh Hill for turning around his season with a fine victory in the Open class, pressuring series leader Matt Moss into a mistake early and capitalising on that.

In fact there was carnage across the main events as both Moss brothers went down, as did Jay Marmont, Kirk Gibbs and Lawson Bopping – the latter two non-finishers.

The Lites race was epic in the closing stages, a crash on the final lap by Gavin Faith handing title rival Luke Styke the round win and a handy seven-point lead in the series at the halfway point.

Live streaming was again in place over the weekend and worked well for the most part apart from some minor connection issues through the night, allowing all at home to tune in and catch the option live from wherever they’re in the world.

This weekend’s Phillip Island double-header won’t be streamed live since the GP Corporation and Dorna have strict commercial deals in place at the MotoGP event, but we’ll bring you all the updates we can from across the weekend. Phillip Island will actually be the most important of the season in my book, because put in two solid performances at the business end of the season and you’ll enter Toowoomba with a strong chance at the championship.

For the title threats, this weekend will either put them in a positive or negative from of mind for Toowoomba’s finale.

Also newsworthy this week was the release of the Monster Energy MX Nationals calendar for 2014 (click here for details) and it’ll again remain 10 rounds as expected. Having the schedule released early is helpful for all, so it’s a credit to Williams Event Management for firming it up and getting it out relatively soon so everybody can prepare.

That’s all from me for this week, thanks for stopping by. Here’s Makker with some of his latest info from the past week…

After a month off we’re hitting the middle part of the supercross season, with three rounds in seven days, thanks to this weekend’s double-header at Phillip Island on Friday and Saturday.

That’s an intense schedule in anyone’s books and there’ll be a few sore and tired lads come Sunday morning.

As I mentioned in last week’s MX Hub, this time of year can be a stressful one for any rider who hasn’t either entered serious talks or signed a contract for next year.

We’ve been keeping our ear to the ground about who’s locked up and who’s still on the market, and will have a feature later this week outlining who’s still hunting a ride for next year. 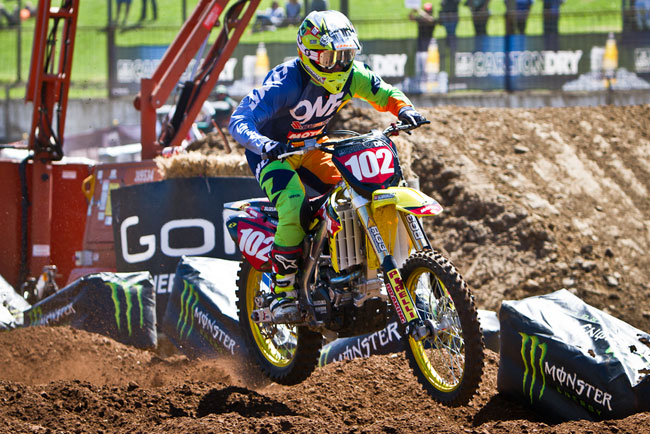 The list of who’s received offers and who’s still waiting will be interesting reading indeed! Hopefully the teams will be able to look through the lists we compile and snap some of these guys up while they’re still available.

Not sure if you saw Facebook earlier this week, but it looks like a rivalry has already begun to sizzle between Serco Yamaha’s Luke Clout and KTM’s Kale Makeham.

Both guys are currently injured (Makeham sustained a shoulder injury at Mt Gambier) and are already chomping at the bit for 2014, but things got a bit heated when the two began niggling at each other on Monday night.

Maybe it’s boredom, maybe it’s staged (hey, remember Reed and Stewart’s heckling on Twitter a few years back?) but it was certainly entertaining. Both guys have since deleted the posts, but it’ll be worth keeping an eye on any further developments.

Changing tack now, but it looks like the FMX industry is going to get a shake-up tonight when Unit unveils its freestyle-specific dirt bike in the US. From the glimpses we’ve seen the “Skycraft” is dripping with carbon fibre and they’re hailing it as a game-changer.

This is a project Paul and Ian Everest have been working on for 10 years, and while I’m looking forward to seeing it unveiled and watching it in action (imagine what Tom Pages could do on a bike that’s 20-30 percent lighter than what he currently uses!), you’ve gotta wonder if it’s a bit of a white elephant and a novelty rather than something that every FMX rider will be willing to pay top-dollar for. We’ll soon find out!