Next year's introduction of the European 300cc Two-Stroke Championship will play a vital role in the development of motocross, according to Youthstream president Giuseppe Luongo. 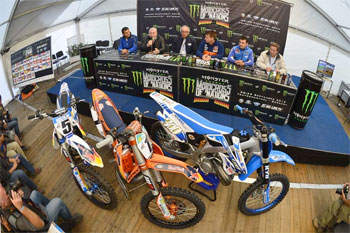 The European 300cc Two-Stroke Championship was launched at the MXoN.

Next year’s introduction of the European 300cc Two-Stroke Championship will play a vital role in the development of motocross, according to Youthstream president Giuseppe Luongo.

The series was officially presented at this month’s FIM Motocross of Nations in Germany, supported by KTM, Husqvarna and TM with their latest big-bore two-strokes on display.

Click here for the original announcement confirming the European championship.

“The two-stroke bikes are coming back strongly and a proof of that is the big demand they have on the market,” Luongo said. “It does not mean that it is the end of the four-stroke bikes, it is just one more choice.

“The European championship is working very well with all the young riders, so with the 300cc we want to give the complete range to all of them going from the 65cc to the 300cc.”

“For KTM the two-stroke world has always been alive and we still have a big request,” confirmed Beirer. “I think it is a very useful way to enter the sport and it is a great balance between cost and excitement.

“I strongly believe that a rider needs to learn how to ride a two-stroke bike before he is ready to move up to the bigger bikes. This is our philosophy in KTM and we will follow the same in Husqvarna.

“We, as European, understand how to keep the sport alive from the base, which is important for all of us and I am sure we will see future world champions riding this 300cc bikes.”

FIM president Vito Ippolito agrees with Beirer when it comes to affordable racing for up and coming competitors or teams.

“For the FIM is very important having this kind of projects in order to give the opportunity of having an affordable bike to the young generations of motocross riders,” he commented.

“One of the FIM goals is having thousands and thousands of young riders around the world, so the cost or purchasing and maintaining the bikes is very important to make this happen.”

The new European championship will span seven rounds in 2014 alongside the MXGP World Championship.