Hart & Huntington/InsureMyRide/Suzuki’s American import Josh Hill has lived up to expectations of being a title threat after a solid win at the third round of the Terex Australian Supercross Championship on Saturday.

After a lacklustre outing at the opening two rounds at Darwin, Hill capitalised on a big crash from series leader Matt Moss early in the Mount Gamiber main to secure his first supercross main event win since Minneapolis in 2008

MotoOnline.com.au caught up with the 24-year-old Oregon native to find out what went down and how he’s settling in to the Aussie lifestyle. Congratulations on a dominant display at Mount Gambier, mate. How does it feel to get your first supercross main win in over five years?

Thanks man. Yeah it’s been a long time for me. I won a heat race at Minneapolis this year, but it’s been a while since I won a main event. It definitely feels good to get another win under my belt.

You looked like a different rider out there from what we saw at Darwin last month. I guess you’ve had more time to get bikes dialled in and get used to everything here.

Oh, the bike is completely different to what I rode at Darwin. We built a Pro Circuit bike from the US and popped it on the dyno here, but it was nowhere near what we expected. We still rode it at Darwin, just because we had no time to make changes, but honestly, it was worse than the stock bike I’d been practicing on!

We changed mechanics and brought Jarrod Pyne in from Powersports Kawasaki, and basically restarted our program from scratch. We used a bunch of aftermarket parts with the best intention of making a strong bike in the areas where I needed it, and I have so much more confidence in the bike now.

During the Mount Gambier race I felt a lot more comfortable. I tried to stick on the back of Matt Moss’s tyre and when he made a mistake and went down, I was there to take advantage of it and ride my own race to the finish. 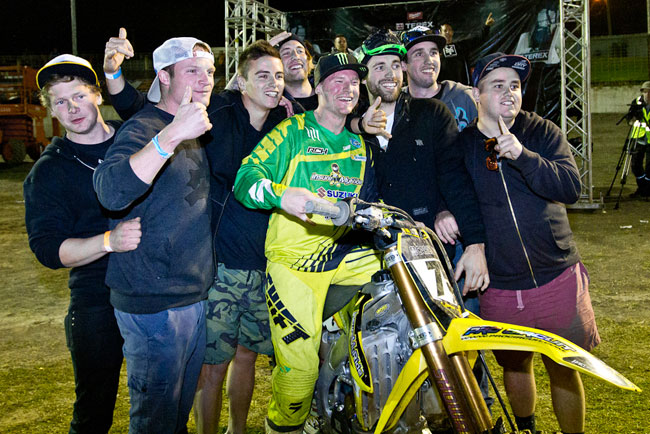 Hill’s win was a popular one on Saturday night in SA. Image: Grant Reynolds/FiftySix Clix.

Obviously the supercross tracks and atmosphere here are a lot different from what you’re used to in the US. Has that taken a bit to get used to?

Yeah, the tracks are a bit different. Here they’re more spread out, the jumps are faster and aren’t as steep or as tall as what I was expecting. As well as that there’s more space between the jumps and the corners, so the race pace is higher.

It’s funny because I’ve been practising at Kade Mosig’s track, which is more based around a US style track, with big, steep jumps, then I come to the races and everything’s more mellow and faster.

We’ve only got one set of suspension over here so we’re messing with the clickers a lot to try and find something that works. We’ll test some softer set-ups this week and hopefully that’ll help too.

It’s funny because I watched a bunch of videos of Australian supercrosses before I came down and expected the jumps to be as big and steep – if not bigger – than what we have back home, but this year everything is low and tapered.

Maybe they’re trying to break everyone into supercross mode from the outdoors, but I hope we see it get steeper this weekend at Phillip Island.

What do you think of the quality of riders here in Australia?

They’re fast for sure. Everyone seems to ride these types of types of supercross tracks well and they’re not scared to jump anything.

I’ve known Matt and Jake Moss for a long time, we hung out at the World Minis on 80s back in the day and I watched both of them race in the States, so I knew they’d be good. I haven’t raced against them directly, but those guys are definitely on it and it’s great practice for me before the AMA Supercross Championship next year.

I’m a supercross-only rider, and the Australian series coincides well with the American series. Hopefully it’ll keep growing to where it was a few years ago and we can see more Americans make the trip down for some off-season racing. Major revisions were made to Hill’s RM-Z450 before the weekend. Image: Grant Reynolds/FiftySix Clix.

How’s it been adjusting to the Australian way of life?

It’s been awesome. I’m here for 90 days and it’s pretty similar to the States, except for driving on the other side of the world and using the metric system!

I love it here though. The Mosigs have opened their doors for me, I’m driving a Falcon ute that one of the Hart & Huntington-sponsored wakeboarders has let me borrow, and I’ve been riding with Kade and the Melbourne guys a lot.

I met Kade back in 2009 when he was staying at Bilko’s in Murrieta, and we’ve been friends ever since. We also hung out at Josh Cachia’s place after Mount Gambier, went riding in the dunes and caught some crayfish. It’s been a rad trip, that’s for sure.

Well it’s been great having you over here, man. Thanks for the chat and all the best for Phillip Island this weekend.

No problem. Thank you!