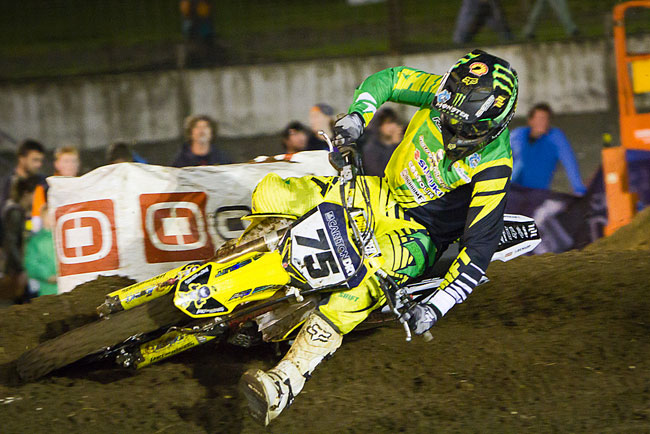 Under 19s heat one was topped by Jake Donaher, with Jett Anderson and Bailey Coxon completing the top three. Jake Emanuelli (Raceline Pirelli Suzuki), on debut with the team, won heat two ahead of Jay Wilson (GYTR Yamaha) and Joel Wightman (Yamaha).

The Junior Lites category marked the first main event of the evening, won by Brock McLeary (KTM), with Wilson Todd (Yamaha) and Jordan Hill (KTM) rounding out the podium.

In the Under 19s main event it was Wilson who opened the season with victory, fending off a mid-race charge from Emanuelli, with Corey James (Berry Sweet/Lucas Oil Yamaha) rounding out the podium.

“It was great, I haven’t had that good of a day, but it’s great to get it done in the finals,” Wilson said. “I can’t give it up enough to GYTR Yamaha and the whole team – I can’t thank them enough. We’ve got the red plate now, that’s a first, so we’ll keep charging along from here.” Styke won a thrilling 15-lap Lites main event, handed the victory with just a few corners to go after Faith crashed out of a comfortable lead. The podium was Styke ahead of Harrison and a charging Marmont, who bounced back from a first lap fall.

It was a second consecutive win for Styke, breaking the points lead between him and Faith, extending him a seven-point lead in the process.

“They say it’s not over until it’s over, it shows never to give up,” Styke said. “Hats off to Gavin, he rode an awesome race but made a silly mistake on the last lap. I rode my own race, made some mistakes early, but hats off to Serco Yamaha, it’s awesome.”

Harrison was elated with his first podium of the season, boosting him inside the top 10 in the series at the halfway point.

“I can’t thank Choice Motorsports KTM enough,” Harrison said. “I’m just so happy, hard work pays off and this is the best feeling ever. It’s my second race meeting and nearly two years, but I just need seat time and to enjoy myself – I cannot wait for the next race now.” 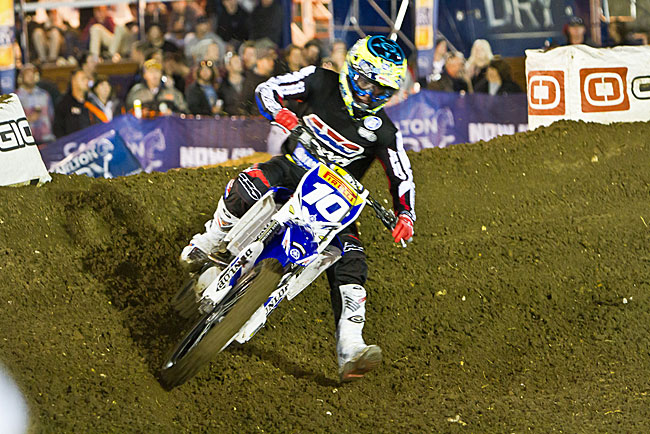 Marmont’s race was a memorable one, the former champion showing signs of his title-winning form, and landing on the podium for the second time in three rounds.

“I tucked the front-end, it was a silly mistake and cost me big time, but we’re still on the podium and in the championship,” Marmont said. “I did a lot of homework after Darwin, spent a lot of time on the bike, and unfortunately I couldn’t put it all in place. Anyway, we’ll come back strong next week.”

The top five was completed by a disappointed Faith, with standout Honda privateer Taylor Potter fifth. TM Racing Australia’s Nick Sutherland scored an impressive sixth upon switching to the two-stroke for this weekend.

Tunetech Racing KTM’s Kale Makeham was an early casualty for the evening, transported to hospital with a suspected shoulder injury in the heat races. The SX-Open main event was a thriller, with Matt Moss holeshotting and leading early, before a heavy crash bumped him to the bottom half of the top 10. That handed the lead to Hill, who soldiered on to win convincingly from Peick in an American 1-2 and Jake Moss, who kept his perfect podium run in tact.

“I got a second place start, was pacing myself behind Matt waiting for a mistake cos he was making a lot but wasn’t losing time,” Hill said. “He ended up going down, so from there I rode my own race, my bike started to detonate a bit, but I rode it out.”

Peick was satisfied with second, resulting in his second podium of the season and retaining third in the standings – eight points from Matt Moss in the lead.

“I was trying to keep it consistent,” Peick said. “I didn’t get the start, both Moss’s went down, but I kept it straight and smooth so it was awesome. I’m really thankful for everybody who’s helped me get here.”

Jake Moss recovered from a crash while running second to seal third, now four points in arrears of his twin brother in the series. Styke topped the 250s from Harrison and Marmont in a popular podium. Image: Grant Reynolds/FiftySix Clix.

“I played it too easy at the start, I knew the track would bit you, which we saw with Matt,” Jake said. “Hill definitely slowed down mid-race, but unfortunately I got caught up with a lapper and went down. Three in a row on the box now, so that’s what I’ve got to keep doing.”

Matt Moss recovered to fifth behind McCoy, holding onto his championship lead over Jake and Peick. Meanwhile, Hill climbed to fourth, 10 points off of Moss.

Behind Moss in sixth at Mount Gambier was Hill’s teammate Martin after an entertaining dice with Mosig, while defending champion Marmont, another crasher in the attrition-filled final salvaged eighth. The top 10 was rounded out by rising stars Jacob Wright (Honda) and Hayden Mellross (Carlton Dry Honda).

The series will resume next weekend at Phillip Island, the double-header alongside the Australian Motorcycle Grand Prix in Victoria.